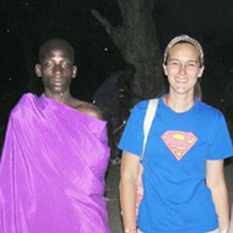 My research interests broadly fall into the categories of wildlife ecology and rural sociology. More specifically, I am interested in bushmeat and its relationship to rural livelihoods in Africa.

Bushmeat hunting, though providing vital nutrition, threatens the persistence of countless species and led to the development of what scholars have labeled “the bushmeat crisis”. Much of the bushmeat literature points to two different drivers to bushmeat hunting: 1.) Taste preference for bushmeat and 2.) lack of alternative protein and income sources. By claiming that a lack of alternatives is a driver to bushmeat hunting, these scholars are implicating hunger/food insecurity and poverty as the underlying factors. To decrease dependence on wildlife, hunger and poverty must be alleviated. Hypothetically, increasing reliable alternative income and protein sources would cause a decrease in reliance on bushmeat. Scientists and managers alike have posited that poultry would be an ideal substitute because it is relatively easy to manage, has a quick turn over and does not require massive inputs. This sounds plausible, however, simplistic. If it is as simple as increasing poultry production at a household level, why have we not seen the end to poverty, and the eradication of food insecurity and bushmeat hunting?