Desertification is a change in soil properties, vegetation or climate, which results in a persistent loss of ecosystem services that are fundamental to sustaining life. Desertification affects large dryland areas around the world and is a major cause of stress in human societies. Understanding the drivers and feedbacks of global desertification is motivated by our increasing need to improve global food production and to sustainably manage ecosystems in the context of climate change. Classic desertification theories look at this process as a transition between stable states in bistable ecosystem dynamics. Climate change (i.e., aridification) and land use dynamics are the major drivers of an ecosystem shift to a ‘‘desertified’’ (or ‘‘degraded’’) state. This shift is typically sustained by positive feedbacks, which stabilize the system in the new state. Desertification feedbacks may involve land degradation processes (e.g., nutrient loss or salinization), changes in rainfall regime resulting from land-atmosphere interactions (e.g., precipitation recycling, dust emissions), or changes in plant community composition (e.g., shrub encroachment, decrease in vegetation cover).
Our group is investigating each of these feedback mechanisms and their possible enhancement by interactions with socio-economic drivers. Large-scale effects of desertification include the emigration of ‘‘environmental refugees’’ displaced from degraded areas, climatic changes, and the alteration of global biogeochemical cycles resulting from the emission and long-range transport of fine mineral dust. Recent research has identified some possible early warning signs of desertification, which can be used as indicators of resilience loss and imminent shift to desert-like conditions. 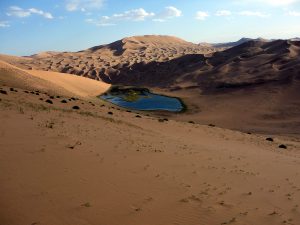 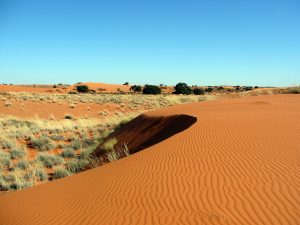 The Southern Hemisphere shows relatively low levels of atmospheric dust concentrations because most sources of atmospheric dust on Earth are located in the Northern Hemisphere. The lower dust emissions in the Southern Hemisphere in part limit the supply of micronutrients (primarily soluble iron) to the Southern Ocean, thereby constraining its productivity. Climate and land use change can alter the current distribution of dust source regions on Earth through the activation of new dust sources as a result of drought and land use intensification. In particular, dust concentrations could increase as a result of losses of vegetation cover in the southern Kalahari. There is some evidence of an ongoing remobilization of stabilized dune fields in the southern Kalahari where dune crests with sparse vegetation cover are reactivated during dry and windy periods, a phenomenon that is predicted to intensify with increased land degradation, overgrazing, and droughts. Despite the potentially important implications of dust emissions from the Kalahari, it is still unclear whether the predicted remobilization of the Kalahari dunes could be associated with increased dust emissions from this region.
Our group has carried out several aeolian sediment sampling campaigns over a variety of land covers in the southern Kalahari. We are using these results to quantify the potential rate of dust emissions and its dependence on vegetation cover and to make an estimate of dust fluxes from the southern Kalahari. The results show that the loss of vegetation could lead to substantial increases in dust emission and nutrient loss. We are also evaluating the soluble iron content of Kalahari dust and the dust generation potential of Kalahari sands and other sediment deposits in the Southern Hemisphere to map the regions of the Southern Ocean that are prone to the deposition of dust from land degradation. 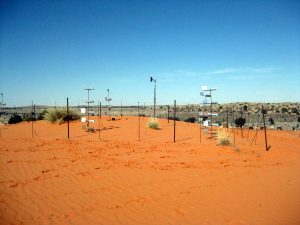 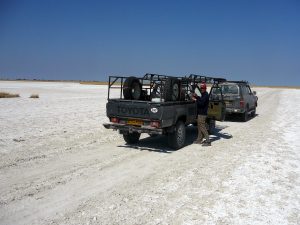