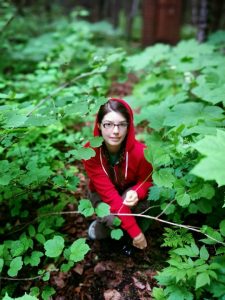 For me, the constant hunger for understanding, exploration and discovery is what drove me into a career as a biologist and more specifically an entomologist. To be a part of science is to be a part of something alive, an entity all its own, a web of theories and discoveries in constant flux. It’s that passion that’s shaped my career—from sampling insects for Apple to giving Bug-Talks to preschool classes.

In 2013 I received a masters in ecology and systematic biology with an emphasis in entomology. I’ve had the privilege to work on a number of rewarding local projects with the California Academy of Science, Apple, Park Presidio and several of the UC Davis extension branches.

My master’s thesis “Biodiversity on a Salinity Gradient” analyzed the diversities and abundances of insects in our bay’s wetlands with various salinities- which is funny because I have an irrational fear of open water.

My only pet is a rescued ball python named Snak – “Snak The Snake.”