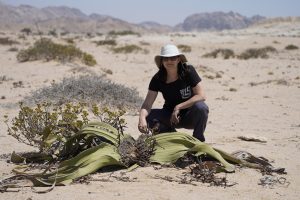 Research Interests:
My research questions focus on understanding how plants respond to their environment, and how plant properties affect processes at the ecosystem scale. In particular, I am interested in the physiological mechanisms that control plant responses to the availability of resources such as water, light, nitrogen; the role of vegetation in carbon and nitrogen biogeochemical cycles, including processes such as decomposition and carbon sequestration; the use of the natural variation of stable isotopes of N, C, H and O in plants and their environment to infer processes linked to resource cycling in the biosphere at various spatial and temporal scales.

Experience:
– Associate Researcher, Department of Integrative Biology and Center for Stable Isotope Biogeochemistry, University of California at Berkeley, January 2000 to present. My position involves research, teaching and university and public service. As an associate member of the Center for Stable Isotope Biogeochemistry at UC Berkeley I am involved in tutoring and training graduate students in Biology, Ecology and Environmental Sciences on aspects of stable isotope techniques and use of stable isotope mass spectrometry.
– Visiting Scientist, Department of Ecology and Evolutionary Biology, Cornell University, Ithaca, NY, USA, 1999.
– Faculty, Department of Agronomy, University of Bologna, Italy, 1992-1998. I was involved in research focused on physiological responses of crop species to water stress and nutrients. In 1997, 1998 and 1999 I also designed and taught the graduate course “Physiology of crop plants” for the Plant Biotechnology Program, University of Bologna, Italy.
– NATO and Italian Research Council Fellow, Department of Soil, Crop and Atmospheric Sciences, Cornell University, Ithaca, NY, 1993, 1996, 1997. In collaboration with Prof. TL Setter I was involved in a project aimed to understand the cellular and physiological bases for altered reproductive growth in plants subjected to water deficit. In particular, I studied the role of the hormone abscisic acid in the inhibition of cell division in developing maize endosperm.