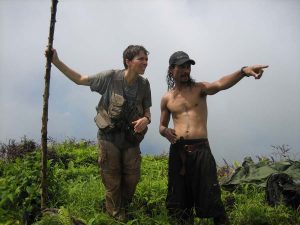 The arthropod fauna of Micronesia has been studied largely through the efforts of the late JL Gressitt and colleagues in the 1940s – 1960s, which resulted in a series of articles on the Insects of Micronesia. Of all islands, Pohnpei was found to be a rich center of endemism, with many unusual forms. The fauna of Kosrae was found to represent an attenuation of the Pohnpei fauna with some local endemism. Spiders were only cursorily represented in this survey, with only 9 species described form these islands, and all 9 species are widely distributed outside these islands. Since 2006 we have found many new species. Affinities are likely from the west. 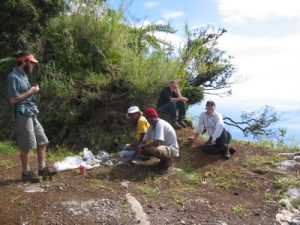 In July 2005 I started field work on the spiders of Fiji as part of a survey on the arthropods of the Fijian Islands (with Eli Sarnat, Andy Bennet, and Moala Tokota’a, left). This work was funded by the National Science Foundation through the Bishop Museum, Honolulu (PI Neal Evenhuis). 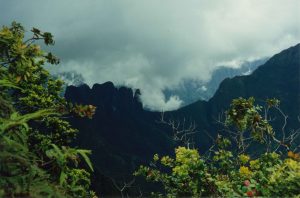 Research in the islands of French Polynesia indicates that several of the spider groups that have diversified here are the same as those that have diversified in Hawaii , though species diversity is not as high as that in Hawaii. Over the last decade I have been describing new species on these islands, determining relationships within the archipelagoes, and how they are related between isolated archipelagoes. This work is based out of UC Berkeley’s Gump Research Station in Moorea and in collaboration with the Délégation à la Recherche in Papeete, Tahiti. In December 2002 I completed an expedition, funded by the Délégation à la Recherche, with Jean-Yves Meyer (pictured below on Mt Perau summit), Benoit Fontaine, Olivier Gargominy, and Ron Englund, to the southernmost Austral island of Rapa (photograph on right from near the summit). This work which was made possible by the gracious hospitality of M. and Mme. Cerdan Faraire (photograph on right). More recent work on the islands was through a NSF-funded survey of all high islands of French Polynesia. 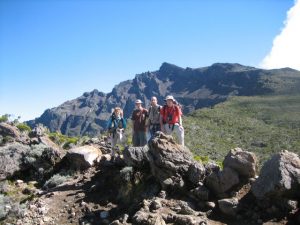 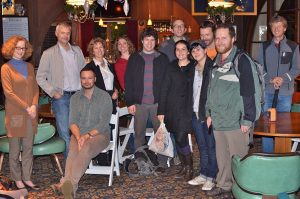 The goal of the spider project is to understand how communities form on isolated land masses over similar time scales, but with very different sets of potential colonists. Moreover, the islands of the Mascarenes are considerably less remote than many of the Pacific islands, Reunion being only 724 km east of Madagascar. This project forms the basis of the PhD research of Julianne Casquet, Université Paul Sabatier, Toulouse.