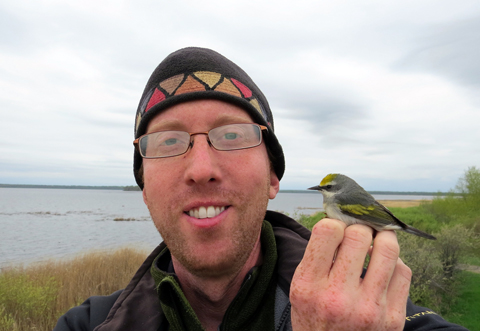 I earned a B.S. in Wildlife Biology with a certificate in Environmental Studies from Ohio University in 2001. In 2005, I earned an M.S. in Ecology and Evolutionary Biology advised by Dr. Donald Miles at Ohio University. In 2010, I earned a Ph.D. in Wildlife Ecology and Management from the University of Minnesota working with Dr. David Andersen in the Minnesota Cooperative Fish and Wildlife Research Unit. I continued working with Dr. Andersen as a postdoctoral research associate through July 2012 coordinating an international study of songbird demography and habitat selection. In August 2012 I started as an NSF Postdoctoral Research Fellow sponsored by Dr. David Buehler at the University of Tennessee and collaborating with Dr. Andersen at the Minnesota Coop Unit and with many other scientists. As an NSF Postdoc I am coordinating a range-wide study of migration in a hybridizing songbird species complex, and I am coordinating this study as a Visiting Research Scholar in the Beissinger Lab here at UC Berkeley.

I explore the interconnectivity of population ecology and evolutionary biology with the goal of simultaneously producing actionable science for biodiversity conservation and improving our knowledge of the evolution of bird behaviors. Concurrently, my team and I improve upon conventional methods and develop novel methods in field data collection and analysis to make progress in such research possible. We have used radio telemetry to monitor hundreds of nesting songbirds (Ovenbirds, Hermit Thrushes, Wood Thrushes, and Golden-winged Warblers) and hundreds of fledglings of those species, and found that studying the entire breeding season (nesting and post-fledging together) is critical for understanding individual fitness, population productivity, breeding habitat selection, and full-season habitat requirements for species often described as habitat specialists. As an NSF Postdoc I (with many collaborators) am using light-level geolocation to investigate range-wide migratory connectivity of Golden-winged Warblers, Blue-winged Warblers, and their hybrids with the goal of developing full-life-cycle conservation plans for this species complex of high conservation concern. By minimizing the mass of the geolocator harness and reducing the handling time required to deploy such units, we have successfully tracked these 9-g birds through their entire annual cycle. Only one full year into this study, we’ve already found some pretty cool results (see forthcoming Current Biology paper).

Our group currently has 5 manuscripts in review or in revision and others in late stages of preparation. Stay tuned here and on my research website for our latest products.

Our Evacuation Migration paper in Current Biology paper has received world-wide attention from >200 media outlets, a sampling of which has been archived by Altmetric here:

To listen to a story about the Golden-winged Warbler demography project by Minnesota Public Radio’s Dan Gunderson, go here:

Check out the current issue of Living Bird magazine for a story by Gustave Axelson about the Golden-winged Warbler demography project.

My academic ancestry traces direct lines to the respective “fathers” of American ecology and wildlife management and it gives me a strong feeling of responsibility.

WHERE ARE THEY NOW?

I have been lucky to work with more than 30 technicians in my 10 field seasons as a graduate student and postdoc.  Many of them have continued on to graduate positions of their own or will be doing so very soon.  I would like to take credit for their success, but I think I simply did well at hiring people who were already on their way.  Here is what some have been up to:

Sean joined my field crew in the second year of my dissertation work and we have been working together ever since.  Sean successfully defended his Master’s Thesis “Landscape productivity and the ecology of brood division in golden-winged warblers of the western Great Lakes region” in November 2013 at the University of Minnesota where he was co-advised by me and David Andersen of the Minnesota Cooperative Fish and Wildlife Research Unit.  Sean will likely start a doctoral program in the next year, and someday I will probably be working for him.

Tara is the reason the first field season of my dissertation work was successful.  Her tireless work ethic was a life saver during the all-important pilot season.  Tara returned to help get the golden-winged warbler demography project up and running in 2010, and she independently led one of our field crews in 2011.  Tara is now living in Brainerd, Minnesota with her husband and son, and she still helps out at our Minnesota field sites each summer.

Justin joined our crew for the pilot season of the golden-winged warbler demography project in 2010.  He returned to help me lead the largest site for the following two years and shouldered a lot of responsibility.  Justin is now working on an MS at the University of Tennessee with Dr. David Buehler.

Gunnar worked on the golden-winged warbler demography project in 2011 when he spent a couple of weeks at one of our Minnesota sites and then helped Sean Peterson in his first year of work in Manitoba.  Gunnar returned in 2012 and excelled at independently leading a crew at one of our sites in very challenging conditions.  Gunnar started his MS work in fall 2013 in David Andersen’s lab at the University of Minnesota.

Adrian worked with me for one season during my dissertation research before starting graduate school himself.  Adrian went on to earn his MS working with Tim O’Connell at Oklahoma State University and is now working on his PhD with Dr. Sam Riffell at Mississippi State University.

Dianne worked with me for one season during my dissertation research, and she and Eric Michel proved that UW Steven’s Point grads make solid field biologists.  Dianne recently completed her MS at Texas A&M University with Dr. Michael Morrison, and is now a wildlife biologist with the Wisconsin Department of Natural Resources.

Eric is both brains and brawn.  Eric worked with me for one season during my dissertation work, and he let nothing stop him from getting in the field and getting the job done.  Eric recently earned his MS at Mississippi State University with Dr. Steve Demarais, and he is currently a PhD student in the same lab.

Kelly worked with me for one season during my dissertation research before moving to Hawaii and joining the Maui Forest Bird Recovery Project.  Our paths have unexpectedly crossed again as Kelly is now working on her PhD with Dr. Steven Beissinger at the University of California, Berkeley.

Alex worked on my crew for two summers on the golden-winged warbler demography project.  Alex’s work ethic has a way of making everyone else feel lazy and unorganized with his endless energy and constant attention to detail.  He was the nest searching champion of 2012.  Alex started his MS work in Dr. Christopher Moorman’s lab at North Carolina State University in 2013.

Renae is a talented marine biologist who shared her skills with the bird world for two summers working on the golden-winged warbler demography project.  Renae will soon finish her MS in marine biology at Nova Southeastern University in Florida.

Alison worked on my dissertation project for one season before continuing on to her own graduate research.  She recently earned her MS at Southern Illinois University with Dr. Eric Hellgren.

Mike worked on John Loegering’s golden-winged warbler crew at one of our study sites in 2010, and I was happy to have his expertise on my crew for the following two years.  Mike is a great outdoorsman and field biologist who is reliable and hardworking no matter the conditions.  Mike is going to be successful at whatever he chooses to do next.

Callie worked with me for one year on the golden-winged warbler demography project.  She was the nest searching champion of 2011.  Callie has since gained a variety of field experience in other positions, and I suspect she will be conducting her own research in the near future.