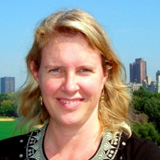 Addressing poverty: I tell my daughter and my friends that I work to get more water and cleaner water to poor people. In the Middle East, like the Western United States, water is scarce everywhere. Cleaner water has immediate health impacts, and more efficient uses of water effectively create more water. Often I am working with transboundary waters — resources shared by two or more countries — and countries benefit by negotiating how much water each will use, and how much water-based pollution each one intends to dump. This requires diplomatic skills as well as technical ones, and those diplomatic skills are the ones I am developing more fully later in life.

Memorable project: I worked on a 10-year project to increase the percentage of access to fresh drinking water for rural Ghanaians. Over that decade, the number of rural Ghanaians with access to clean water improved from 35 to 45 percent, and the project all but eliminated river blindness throughout most of Ghana. The Ghanaians working in the Community Water and Sanitation Agency were the heroes, and I remain proud to have worked alongside them. To this day, I consider Ghana to be my second home and my co-workers there as lifelong friends. The 10-year perspective provided the insight that forward progress is slow, and in the immediate, one must trust that hard work will eventually yield results.

Development priority: Even though I work in water, I am convinced that the most pressing development need is to increase girls' participation in schools. Higher education attainment for women leads to a stronger valuation of the role of education for both girls and boys in the household. It contributes to more informed health decisions, including contraceptive health, and leads to a more-fully informed workforce. The trickle-down impacts of this one intervention are so wide that it is a key, if not the key, to improving livelihoods.

CNR influence: I can honestly say that every week I use analytics learned in my second-year natural resource and environmental economics course sequence (261 and 262) as well as Michael Hanemann's Water Resource Economics course, which was fundamental in narrowing my technical expertise to drinking water, irrigation water, water quality, and the management of transboundary waters.

Stand-out journey: I was working in Abidjan, Ivory Coast, during a failed coup attempt in 2002. Food and water were running out, domestic TV and radio were down, and the only news we were getting was from BBC radio. After waiting for the unrest to blow over (it didn't), I finally decamped and took a hotel bus to the airport. During that bus ride through Abidjan, I saw houses burning, stores looted, and mobs with machetes covered in blood and bandanas over their noses and mouths. At the airport, the goal was a one-way ticket to anywhere, paid in cash, plus some "extra donation." I witnessed a lot that day that I hope never to see again. 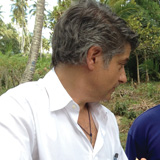 Behind the title: When my daughters were little, I had the hardest time explaining to them what my job was. For a five- and seven-year-old, their dad was "traveling all the time in strange places, collecting information on stuff, and studying things." They are teenagers now and describe my work in exactly the same way. I manage the Living Standards Measurement Study (LSMS), a program in the Development Research Group to support methodological improvement in household surveys and strengthen developing countries' capacity in collecting high-quality data to adequately inform policy-making. For that, I travel all the time in strange places, collect information on stuff, and study things.

Poverty reduction: Household surveys modeled on the LSMS are the backbone of much of the analysis carried out at the World Bank and beyond in support of developing countries' efforts to eradicate poverty. For more than 30 years, the LSMS team has worked toward advancing the poverty agenda by improving the measurement and our understanding of poverty. The Bank's president recently announced new goals of eradicating extreme poverty and promoting shared prosperity — goals that call for a renewed effort in improving both the availability and quality of poverty data. The LSMS will continue playing its role to ensure that anti-poverty policies and programs are informed by the right data.

Eye-opener: On my first visit to Somalia in the late 1980s, I was barely 25, working for the United Nations. The Somali government had carried out a population census a few years before, but some "glitches" kept the National Statistical Office from completing the data processing, which in those days was done on a computer mainframe. My mission: Find out what abstruse technical problem was delaying the data release, and get the data processing finalized. Armed with the right academic background and lots of enthusiasm, I land in scorching-hot Mogadishu. After only a couple of days, the solution was clear: sweaters! The data entry room, which had to be kept cold for the computer mainframe to work properly, was too cold for the staff members who wore Somali weather–appropriate shorts and sandals. This caused high absenteeism and paralyzed data entry for months. In that project, and in many more after that, I ended up using my common sense and ingenuity as often as my academic preparation.

Jet-set life: I am on a plane right now. I was on a plane two weeks ago. I will be on another one next week, and in three weeks time. But after 25 years of traveling, I still love it. What I find particularly rewarding is being immersed in one culture at noon and in a completely different one at 9 p.m. The challenges? Being away from my family for long stretches of time and always missing Pearl Jam every time they come to town.

Standout journey: Probably the most interesting place I visited was Iraq in the mid-1990s, between the two wars. I visited twice and traveled to every little corner of the country, from Al Faw in the south to Sulaymaniyah and Dohuk in northern Kurdistan. Absolutely fascinating ... and awfully sad. The situation was so dire that in many markets across the country you would find people selling pieces of their homes: bricks, windows, and doors, even rebar removed from concrete. Most places in Africa are certainly poorer (no windows in their homes to sell), but in Africa you get a sense that people are used to hardship. Iraq's middle class and professionals clearly were not prepared. 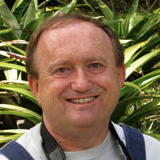 Behind the title: My role is to promote environmentally sustainable development in general, and biodiversity conservation in particular, within Bank-supported development projects, studies, and policy advice to governments. Most of my work now focuses on the sub-Saharan region; during 1990–2009, I was based in the Latin America and Caribbean region. I work with specific infrastructure, such as water supply and electric power, and natural resource–management projects to help ensure that they comply with the Bank's environmental policies, including Natural Habitats Policy. I also lead and contribute to analytical studies, such as one now underway on biodiversity offsets.

Eye-opener: While working on the World Bank publication, Greening the Wind: Environmental and Social Considerations for Wind Power Development (2011), I found eye-opening the amount of push back from some of the wind industry, and even from environmental organizations, to the idea that wind — like all large-scale power-generation technologies — has significant environmental impacts that need to be addressed in project planning, construction, and operation. This study enabled me to verify the impacts of land-based wind power on birds, bats, and natural habitats, along with key mitigation measures that have yet to be consistently applied in most countries, including the United States.

Global perspective: Being in a global organization facilitates knowledge-sharing across countries and regions. For example, I work with a project in Burundi that is applying lessons learned from Ethiopia, Colombia, and El Salvador about the benefits of shade-grown coffee (versus open-sun coffee) for biodiversity and erosion control, as well as improving coffee quality and farmers' incomes.

Development priority: The most pressing need for developing countries is to improve the quality of life of their citizens in ways that are environmentally and socially sustainable. Environmental sustainability means using fresh water, soil, forests, and fisheries without losing or degrading them, maintaining viable populations of wild species, and keeping carbon emissions within reasonable limits. This is, of course, also a challenge for developed countries. However, developing countries have yet to build much of their infrastructure, so they have opportunities to develop more sustainably and avoid repeating some of the environmental mistakes made by developed countries.

Standout journey: One that especially stands out for me is Hong Kong. It is one of the world's most densely populated territories, yet close to 70 percent of its land area is green space, including Mai Po, a world-class coastal wetland reserve, and Tai Po Kau, a forest reserve with recovering native wildlife populations. The area still faces major environmental challenges, but it shows what can be achieved with adequate planning and management. 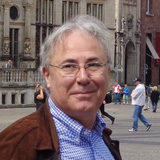 Behind the title: I manage the Research Support Budget, which is like a mini National Science Foundation for the World Bank. Staff members from all over the Bank send me research proposals in all possible areas: health, education, infrastructure, finance, etc. I select external reviewers to evaluate them, and I also review them myself. If they are of good quality, I finance them. I am also in charge of publishing the policy research working papers series on our website, which is very popular worldwide. Also, about a third of my time is dedicated to doing my own research, which lately has been focused on urban sustainability.

Poverty reduction: The World Bank tries to influence development by financing projects and programs, but also by producing knowledge that can assist in reaching our goals, especially poverty reduction. By financing good research on all the dimensions of poverty alleviation — social policy, health policy, education, empowerment, etc. — we contribute to that goal.

Memorable projects: When I worked in operational jobs in Africa, the Middle East, and Eastern Europe, I managed the first-ever project to Albania when it opened up during the transition to a parliamentary system in 1992. The country was in shambles; overloaded electricity transformers in the streets of Tirana were exploding in front of our eyes; there were 30 cars in the entire country when we first went there; there were no spare parts for anything. So we did an emergency loan to fix the most urgent issues in energy, agriculture, and transport. I worked closely with Ministry of Finance and Central Bank staff, who were excellent and very dedicated, and I traveled extensively in the country. I genuinely had the feeling that my work was useful and appreciated by the Albanians — and that's a great feeling! The most intellectually stimulating work I did was with Nick Stern, now Lord Stern, which resulted in a book that I co-authored with him, Growth and Empowerment: Making Development Happen (MIT Press).

Development priority: The most pressing need for poor countries is economic growth. Poverty rates have literally collapsed in the last 20 years or so — in large part because most of the poor were in China and India, two countries that have done well. Poverty rates collapsed largely because developing-country growth accelerated over the last 10 years. But there is no point in having high growth rates if they are achieved at the price of destruction of the ecosystem — if CO2 emissions increase and biodiversity is destroyed. In my view, the most pressing need is to focus on "green growth" and the consequences of climate change.

CNR influence: Without a doubt, the biggest influence on my professional life has been Professor Alain de Janvry. Not only has he been a mentor and a friend throughout all these years, but he has also shaped my way of thinking. Alain is for me the model scientist: honest, hard working, dedicated, and incredibly sharp. He is also a wonderful human being.