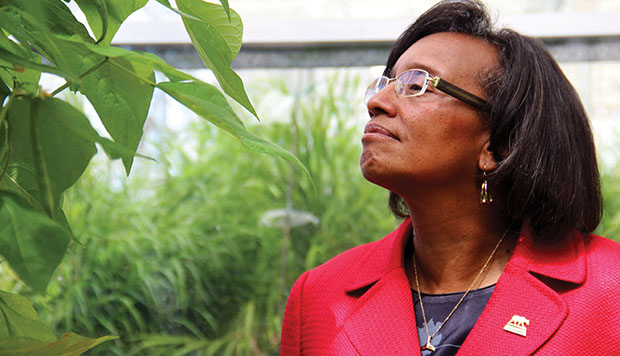 A Grand Vision for UC Davis

Story and photos by Molly Oleson

In February 2013, UC Davis Center for Watershed Sciences researchers released tens of thousands of young hatchery salmon into flooded rice paddies on a Yolo County farm, in collaboration with fishery conservation groups and the California Department of Water Resources. The experiment resulted in a fast and dramatic increase in the size of the salmon. “Stock the rice paddies!” reacts Helene Dillard, revealing her love of catch-and-release fishing for trout, salmon, bluegills, bass, and “just about anything” that swims. “This is really good.”

Dillard was appointed dean of the UC Davis College of Agricultural and Environmental Sciences (CA&ES) in January. The experiment’s success in using an agricultural practice to address a fishery issue isn’t exciting to her just as an avid angler, or as a scientist who sees potential for the growth of struggling fish populations, but as the leader of a top-ranked college in the areas of agriculture and the environment—CNR’s counterpart at UC Davis.

“This is a place that a dean can come and make a difference,” says Dillard, who is happy to return in a new role to CA&ES, where she earned both an MS in soil science and a PhD in plant pathology, after earning a BS in biology of natural resources from UC Berkeley.

Climbing out of the throes of budget cuts, UC Davis’s founding college—committed to addressing critical issues related to agriculture, the environment, food systems, and human and social sciences—has been growing steadily and is poised to be strengthened by Dillard’s experience as an accomplished scientist and administrator. The Bay Area native left Davis in 1984 to join the faculty of plant pathology at Cornell University’s New York Agricultural Experiment Station in Geneva, and later became associate dean of Cornell’s College of Agriculture and Life Sciences and the College of Human Ecology, as well as director of its Cooperative Extension program. 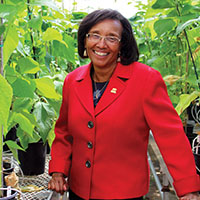 CA&ES, like CNR, is affiliated with the multi-campus UC Division of Agriculture and Natural Resources, which provides a research- and outreach-focused partnership between the U.S. Department of Agriculture and land-grant institutions. “When you put it all together, it’s greater than the sum of its parts,” Dillard says of the college’s three synergistic components: teaching, research, and outreach.

She has grand visions for each. Goals for the academic component range from improving laboratories and fostering multidisciplinary collaborations, to guiding students in discovering what they’re passionate about, to ensuring that the dean’s office is a place that enables growth in the faculty’s work. “We [the administration] tend to become the people that have all the rules—‘Here’s what you can’t do,’” Dillard says. “I’m looking for ways to make us more the kind of place faculty can come to help get what they need to go for their next grant.”

Dillard’s love of discovery was evident when she was a kid studying the cells of onion skins and moldy bread under a microscope that her parents had given her. But it wasn’t until she became exposed to different aspects of biology at UC Berkeley that she knew she was headed into the plant world. She credits her plant pathology professor, the late Robert Raabe, for igniting the spark that led to her research on topics like the fungal pathogens that cause diseases in vegetable crops. “He was absolutely amazing,” Dillard says of Raabe.

“When you put it all together, it’s greater than the sum of its parts,” Dillard says of the college’s three synergistic components: teaching, research, and outreach.

Outreach and extension are just as important to Dillard as teaching and research. “If all we ever did was conduct the research and never tell anybody about it, it wouldn’t have any meaning,” she says. Through Cooperative Extension, the college is able to broadly share knowledge with farmers, researchers, and the general public that might otherwise end up buried in scientific journals.

“The vision is to make sure we keep that component strong,” Dillard says. To illustrate, she cites the work of plant sciences professor and researcher Jorge Dubcovsky, who is currently doing field trials of drought-tolerant wheat varieties. “I’m hoping that we can apply some of the concepts he’s learning to other crops we grow in California,” she says. “When I look at our work, what’s so exciting is that it’s not only applicable here and in neighboring western states, but it could also be useful to Europe, Africa, and other countries where drought is becoming a problem.”

Dillard believes that the college can make a huge difference by addressing the interface between agriculture and the environment.

“There’s always a point where these areas meet,” she says, mentioning the graceful symbiosis in the rice paddies, where scientists have figured out how to create a productive coexistence among fish, rice, and water. “My goal is that we do more of that kind of work—where there could have been a major conflict, and instead, we found a solution.”