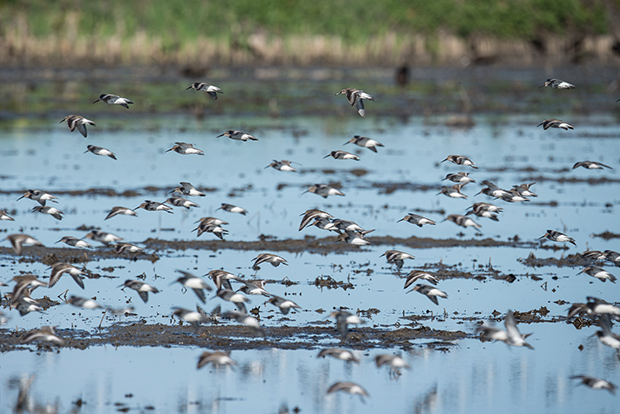 Each year since time immemorial, California’s Central Valley has witnessed a miracle: the beating wings and raucous calls of millions of birds—waterfowl and shorebirds—as they scud into wetland resting spots, en route from their seasonal homes in the Arctic to points south each autumn, and then back again come spring. Not that long ago, these birds numbered between 20 and 40 million, and their watery destination covered four million acres—over 6,000 square miles—in the Sacramento and San Joaquin valleys.

Today, over 90 percent of those wetlands have been replaced by rich agricultural land and ever-expanding cities, and the number of birds that visit has plummeted to the low millions. But they still stop—they must stop—twice each year for several weeks to rest and feed during their journey. 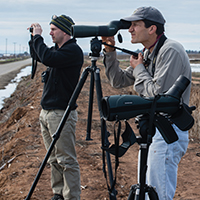 Recently, an unlikely alliance of conservationists and farmers have joined forces to help these doughty migrants along by providing water when and where it’s needed—a seasonal “pop-up” wetland that benefits the farmers in the region and the shorebirds that visit. The project, BirdReturns, is utterly modern in its scope and approach, marked by such buzzwords as citizen science, big data, market-based incentive, crowdsourcing, and reconciliation ecology. But its goal goes back to our very roots: to sustain life on earth and our connection to it.

Hatched at The Nature Conservancy (TNC), BirdReturns addresses the question, How do you design effective conservation for things that don’t stand still? It also takes advantage of natural cycles of the Central Valley rice farmers, who use flooding to manage their fields after the late-summer harvest.

“TNC has a long history of buying lands and restoring them,” said TNC ecologist Mark Reynolds, PhD ’90, Zoology. “That’s kind of the gold standard of conservation. But faced with many millions of acres of habitat shortfall, we realized pretty quickly that we’re not going to buy our way to a solution. That’s only going to result in, optimistically, several thousands of acres, not anywhere close to a million.”

But realistically, he pointed out, shorebirds don’t need that much land all year long. They really only need it for a few weeks in fall and a few weeks in spring. So if scientists could determine just when the various species were resident, could water be provided “on demand”?

Enter crowdsourcing in the form of the citizen science program eBird. At about 187 million entries currently—and growing by some 30 percent each year—eBird, developed by the nonprofit Cornell Laboratory of Ornithology, is a massive database that uses the power of amateur birdwatchers tracking bird occurrences with their smartphones. Reynolds realized that “we could use these data to predict when and where birds would need habitat in California, and by knowing that, we could be smarter about our engagement with farmers.” 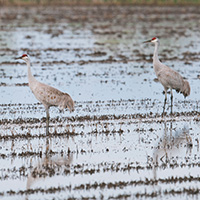 TNC economist Eric Hallstein, MS ’97, Energy and Resources Group (ERG), MCEE ’98, Civil and Environmental Engineering, PhD ’10, ERG, likens the setup to vacation rentals: Rather than buying a house when you visit a city for a short-term stay, you rent one for only the length of time you need. In this case, what is being rented is fallow agricultural fields and 2–4 inches of standing water—the perfect depth for long-beaked shorebirds, such as dunlins, long-billed dowitchers, greater yellowlegs, black-necked stilts, and sandpipers, to snag their mud-dwelling prey of snails, worms, crayfish, and insects. And, the timing of the rice harvest and clearing of fields coincides perfectly with the birds’ visits.

“It’s economically efficient to rent,” said Hallstein. “And we knew that it was probably going to be cheap because we were only paying for a little bit of habitat just when and where birds needed it most. But how do you actually implement such a program?” His brainchild was a strategy used in the business world for acquiring services at an optimum price. In what’s called a reverse auction, the buyer—in this case, TNC—requests a particular good or service—here, land and a farmer’s willingness to flood for four, six, or eight weeks—and asks interested service providers to propose a bid. The bid is based on various factors, including the cost of the water, the cost of labor, and the risk that the land will not dry sufficiently in time for the late-spring tilling and planting.

Central Valley rice farmers typically flood their fields from mid-November through January to soften rice straw, which is then stomped or turned into the soil. This practice has long been known to benefit waterfowl—and duck hunters. “But when that water is no longer useful for stubble decomposition or for duck hunting,” Reynolds said, “the farmers usually pull their boards out and that water goes away.” The innovation of BirdReturns was to extend the flooding period on either end to accommodate the schedule of shorebirds. 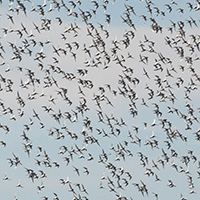 How do you design effective conservation for things that don’t stand still?

After holding workshops in August 2013, TNC invited farmers to bid in November. Some 56 farmers participated, with 80 percent of the bids accepted. (The prices remain confidential, but they covered a wide range, both well below and above what the federal government pays for bird-friendly practices.) “We had about 10,000 acres of functional wetland habitat added to the system, and we had good participation throughout the Sacramento Valley,” said Reynolds, excited about the success. “We had big farms and small farms. And it covered 17 water districts as well.”

The program included unflooded control fields, so the value of the extended flooding could be gauged. “Over the course of February to the middle of April,” Reynolds said, “we collected about 2,000 observations—about 220,000 birds of 57 species, 180,000 of which were target water birds. We saw about a fivefold increase in number over February into March of response to the treatment [flooded] fields, and treatment fields averaged 20 times the density of shorebirds compared with control [nonprogram] fields.”

The pilot program confirmed the value of extended flooding and provided valuable economic information as well. “We were trying to figure out a couple of things this year, one of which is, is there enough price variation among farmers to justify the auction?” said Hallstein. If prices don’t vary, we ought to just send everybody the same contract. But we saw huge amounts of variation—the spread in bids was about fivefold.” He attributes the spread to various factors, the biggest being water price. “And I think the other piece is people’s environmental attitudes. There are farmers who just want to do the right thing. And some farmers who have been experimenting have realized that there’s benefit to having the birds on their fields.” The birds turn the soil, leaving the fields in better condition. “The last piece is, there is a real risk for these farmers. We are partnering with the farmers to share the risk.”

One rice farmer, Amelia Harter, who contributed 175 acres east of Colusa, summed up the experience like this: “I learned that efforts for nature, environment, and animals can work successfully with our existing agricultural industry. I thought that was amazing.”

Reynolds agreed. “It was a real game changer for us, and I think that we’ve created a new tool in the conservation toolbox. This pilot shows us a couple of things,” he continued. “Farmers will participate in a program like this; we can design it to really hit that sweet spot when the birds need the habitat the most; and there are opportunities to take this to a bigger scale.” The 2014 effort involves expanding the program into the fall season, essentially creating six months’ worth of pop-up wetlands to accommodate shorebirds passing both directions along the Pacific Flyway. “We’re also hoping to use this auction mechanism in the future for other kinds of habitats, not just rice,” which could expand the program south into the San Joaquin Valley, and eventually, north into Oregon and Washington.

BirdReturns is a good example of what is called reconciliation ecology, Reynolds said, a growing area of ecology that encourages biodiversity in human-dominated ecosystems. “It’s important that conservation and agriculture, which haven’t always been allied, have projects like this where there is mutual benefit, where we collaborate, and we get to understand each other’s perspectives.” With BirdReturns, the situation is win-win-win: conservationists and farmers both benefit, but the birds get the biggest win of all.