It’s a drizzly winter morning, and dozens of volunteers at the San Francisco–Marin Food Bank are slowly breaking down a 2,000-pound sack of whole oats into 1-pound bags, their hair tucked back in neat plastic caps. A decade ago, volunteers were more likely to be boxing up canned foods items. Today, 60 percent of everything ferried out of this warehouse is fresh produce. No soda or chips are in sight, and whole grains like these General Mills oats are standard. 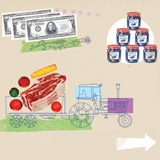 For food banks nationwide to move in a similar healthy direction, coordinated efforts must increase at all levels. It will take leadership like that provided by Feeding America, the national food bank network organization; expanded support for nutrition policies at the local and regional levels; and donor efforts to supply more healthful foods. It’s a tall order. But with the growing ranks of the food-insecure and obese, there is more pressure—and desire—than ever to provide low-income families with healthful food and create support for food bank nutrition policies to ensure that happens, says Patricia Crawford, Cooperative Extension specialist and director of UC Berkeley’s Atkins Center for Weight and Health (CWH), a partnership between the College of Natural Resources and the School of Public Health.

“People managing food banks are taking charge and doing the difficult thing of modifying the healthfulness of the food donations they solicit,” says Karen Webb, a nutritional epidemiologist at CWH. “On the one hand, the food banks want an ample supply of foods to hand out, but they’re also advocates for people in our most vulnerable population, so the nutritional quality of that food is important.” 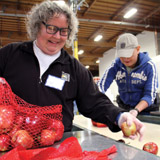 There has been progress, which CWH researchers and their colleagues, at the request of the Institute of Medicine (IOM), the health arm of the National Academy of Sciences, have documented in ‘A Movement Toward Nutrition-Focused Food Banking,’ an upcoming discussion paper to be released in summer 2014. The report details the evolution of food banking as the number of people served by these organizations jumped a whopping 46 percent from 2006 to 2010, according to Feeding America. Today, 12 percent of the population uses the emergency food system. Driven by increased demand, food banks have shifted from an emergency lifeline to a service filling a chronic need.

While organizations move to provide more healthful food, it’s clear that pantry users, or clients, want these foods. A 2011 CWH study asked clients to rank calorie-dense snack-type foods and beverages as well as healthy options by order of preference. “Food pantry clients ranked the most nutritious foods highest,” says Webb, a co-author of the IOM report. “Those foods are expensive, and they want to receive them. Meat, dairy, and fresh produce are at the top of their list, while soda and candy rank lowest.” 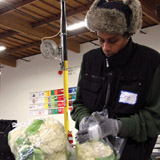 Getting healthier food into clients’ hands requires changes in both policy and practice, but what exactly is a nutrition-driven food policy? Many stakeholders are trying to effect change—food banks and the umbrella groups that support them, organizations and corporations that donate, and state and federal governments—but there are few cohesive policies and common standards to govern how they work together.

To start with, food banks can benefit from formal written guidelines that address the nutritional quality of the foods and beverages that they purchase or acquire from donations, according to the recommendations in the IOM report, whose authors include CWH’s Elizabeth Campbell and Michelle Ross, Heather Hudson of the Food Bank of Central New York, and Ken Hecht, formerly with California Food Policy Advocates. A policy should guide the nutritional quality of the food bank’s inventory as well as provide data analysis to track how successful the food bank is at distributing foods like produce and limiting unhealthful ones such as processed crackers and chips. Some 56 out of 200 food banks have a policy in place, according to a recent Feeding America survey, but more must be done.

Alameda County Community Food Bank (ACCFB) is a policy model, Crawford says. It established a written policy in June 2013, with the help of the nonprofit anti-hunger group MAZON and CWH. The project, which included several other food banks, was funded by Kaiser Permanente.

“We held focus groups with staff members and agency representatives,” says Jenny Lowe, ACCFB’s nutrition education manager. “We wanted to get everyone on the same page. We asked, what are our practices? We’d been following this for a long time, but never wrote it down.” The food bank’s policy is now clear. They purchase fresh fruits and vegetables, low-sugar canned fruits, low-salt canned vegetables, low-fat milk, lean proteins, nut butters, beans, whole grains, packaged meals, and soup.

To track the healthfulness of food, they use a computer system that ranks inventory by nutritional level (1, 2, or 3) and employ “traffic light” labeling on the warehouse floor and on order forms. Green is “choose frequently,” yellow “moderately,” and red “sparingly.”

“Green” foods are now more readily available at food banks across California because of the California Association of Food Banks’ (CAFB) Farm to Family program, which connects state growers and packers to food banks. In 2011, CAFB, a nonprofit, membership-based umbrella group, sponsored AB152, now a state law, which enables farmers to get a 10 percent tax break on the inventory costs of fruits and vegetables they donate.

CAFB exemplifies how agriculture, advocates, and food banks can work together to create policies that incentivize the support system for healthy diets. Since 2005, the group has increased food bank produce donations by 92 million pounds of fruits and vegetables that might have otherwise been plowed under in the fields. “In California, we have a progressive agricultural community as well as progressive food bank organizers,” Crawford says. “It’s that convergence that has made California a model and brought national attention to what we’re doing.”

Other positive steps: Feeding America appointed a director of nutrition in 2011, and in 2012, it implemented Foods to Encourage, nutrition guidelines for promoting health—the food bank network’s first-time effort at national guidelines. It’s also running a pilot program that connects food-insecure clients who have Type 2 diabetes with nutrition, health education, and medical care.

Even with successes like these, there’s still a long way to go.

Six California food banks participated in a 2010–11 CWH study on inventory trends, funded by the Robert Woods Johnson Foundation. All six had significantly increased the amount of produce they provide to pantries, the study found, but hardy onions and potatoes made up about half of those gains. While the increase in fresh produce was dramatic, getting a variety of vitamins and minerals from different types of produce is key to good nutrition, Webb says. “Food banks now must tackle the next challenge: adding more colorful yet hardy vegetables, such as bell peppers and broccoli.”

Part of that challenge is providing better distribution systems to pantries. Many food banks boast state-of-the-art facilities with refrigerated trucks and big walk-in refrigerators, but the pantries they serve are often basement kitchens and church halls with little access to refrigeration or storage. Policy changes must consider how to improve these conditions. For example, ACCFB provides farmers-market style distribution in parking lots to some clients, and both ACCFB and the state of New York help provide pantries with equipment grants to improve facilities.

Sourcing is another hurdle. Although emergency food clients strongly prefer low-fat dairy, lean proteins, and whole grains over soda and other less nutritious foods, it can be difficult for food banks to procure donations that align with these preferences and with nutritional quality guidelines. In 2013, 66 percent of donated foods came from big companies and represented the largest source for food banks, according to Feeding America. Donations of sugary beverages and snack foods have declined substantially, but have not disappeared from the shelves of the six California food banks in the CWH study. In 2010, one California food bank alone distributed over a million pounds—208 million calories—of what Crawford calls “liquid sugar” drinks. “That’s a heck of a lot of excess calories going out to the most vulnerable people, who have a greater likelihood to be diabetic and overweight than higher-income folks,” Webb says.

In February 2012, anti-hunger leaders convened in Oakland, Calif., to discuss their findings from the 2010–11 Robert Wood Johnson Foundation study. There, CWH and California Food Policy Advocates called for food bank procurement policies that meet or exceed the Foods to Encourage guidelines, which were due to be released later that year.

In the most recent nudge forward, the IOM report recommends that items available through U.S. Department of Agriculture (USDA) food distribution programs align with key recommendations from the 2010 Dietary Guidelines for Americans. Most food that the USDA supplies to food banks is already healthy, a recent study showed, and the agency is moving quickly to further improve nutritional quality by adding items like whole-grain pastas and brown rice. The report also recommends that food banks and advocates work with donors to find new ways to incentivize nutritious donations.

The IOM report represents a formidable increase in visibility for the issue of food bank nutrition, and Crawford wants to take advantage of the momentum. She’s calling for a meeting of key stakeholders to discuss how to keep improvements to the emergency food system’s nutritional quality moving forward.

Obesity and diabetes risk continue to plague the nation’s health, and food banks will face big challenges in the coming year, including an expected rise in the number of clients as a result of the recent $8.6 billion in cuts to the Supplemental Nutrition Assistance Program—or SNAP, formerly known as food stamps—part of the farm bill passed in February, and as a consequence of California’s drought, which is expected to bump up food prices.

“Those of us working in the field of hunger and food insecurity want the best for the people we serve,” Crawford says. “There is a moral imperative to do more than to provide just calories. We must provide foods that will help protect the health of the most vulnerable in our society.”