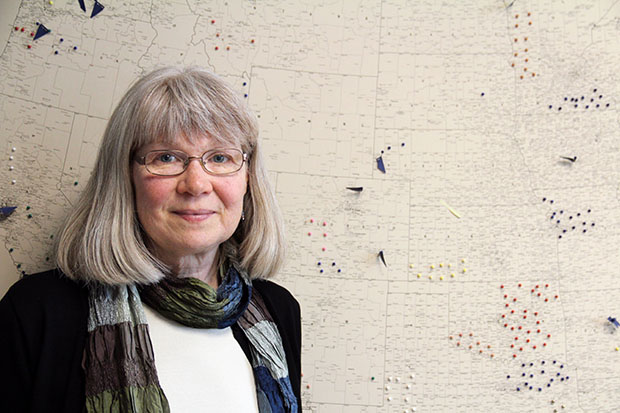 Understanding the Hands that Feed

Story and Photos by Molly Oleson

Susan Gabbard can walk into a grocery store, glance at the fruits and vegetables, and tell you what they are and when, where, and how they were grown. She can tell you what’s ripe in any given region and where a drought, heat wave, or freeze is—or soon will be—affecting harvests and food prices. She can even tell you what the farmworkers who harvest a particular crop look like, where they probably came from, and where they might be headed next.

“My job is never boring,” says Gabbard, a national expert on migrant and seasonal farmworker populations and the project director and manager of the 26-year-old National Agricultural Workers Survey (NAWS). “Farm labor is always changing; things are never the same.”

The annual survey of U.S. farmworkers, which has, over the years, collected the demographic, employment, and health data of more than 56,000 workers in 12 regions, uses innovative techniques and complex models to provide the U.S. Department of Labor and other federal agencies with the most accurate and reliable data on continuously shifting farmworker populations and employment patterns.

“Our mission is to give a voice to farmworkers,” says Gabbard, who has worked on the survey since 1988. It began that same year as a response to the Immigration Reform and Control Act of 1986. “We are the source of data that people turn to when they need to understand how policies are going to affect farmworkers.”

It wasn’t always that way, says Gabbard, who, as vice president of JBS International, also monitors and evaluates AmeriCorps and Senior Corps programs. “In the beginning, we had a lot of opposition from people who didn’t want this kind of data to be out there, because we collect very sensitive data,” she says. “We really had to work very hard to establish the survey as legitimate research.” When the NAWS was getting under way, Gabbard was working in Salinas on her dissertation, which focused on whether giving undocumented farmworkers amnesty would cause them to leave farmwork.

She credits fellow alumnus and “labor-survey expert” Rick Mines, PhD ’80 Agricultural and Resource Economics, with introducing her to California agriculture. Having experienced only the small farms of the East Coast, where she grew up, before landing at UC Berkeley, Gabbard says that she was stunned and intrigued by the massive size of California farms and their labor forces—which she first observed while accompanying Mines on a tour of research sites for a survey of the state’s farmworkers.

“It just goes on forever,” Gabbard says of the rows and rows of different-colored greens in the Salinas Valley. “And for some reason it grabs me, unlike seeing rows and rows of wheat fields in Kansas—that didn’t ever grab me.”

Gabbard says that Berkeley “took a chance” on her, because she was coming from a non-ag-econ background—she holds an MA in anthropology from Duke and a BA in anthropology from Rutgers. Prior to falling for California agriculture, she pictured herself studying international development and looking at small farmers in Asia or Africa.

“My grandfather was a small farmer,” she says, before recounting the once-scary but now-humorous event that dramatically colored her decision to work with crops rather than animals.

"Our mission is to give a voice to farmworkers"

“I was stampeded by cattle at a very young age and had to project myself over a barbed wire fence while my father and grandfather laughed their heads off.”

Gabbard says that her grandfather did migrant farmwork as a teenager to put himself through school, and eventually became a chemist. A professional job allowed him to move his family into middle-class America, but he kept a small farm on the side. This legacy gives her work deeply personal resonance.

“I would really love to see people be able to pay their dues in farmwork and move their families up and along,” Gabbard says, adding that today, these laborers have limited options in the wider economy. “Now we have a situation where people aren’t able to [do that].” Farmworkers are often treated poorly, discriminated against, and prevented from accessing other jobs, she says. “Whenever we find situations where people are being impeded from [pursuing] the American dream, it’s always very upsetting.” 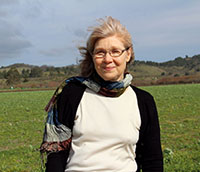 But one of the things Gabbard loves about her job is collaborating with agencies seeking information about the farmworker population so that they can offer health and education resources. It’s rewarding, she says, to see the data that she and her colleagues collect being used to help better the lives of farmworkers.

And studying the trends in farm labor—which Gabbard says have shifted dramatically over the last 25 years—helps her understand what drives change and what supports progress.

“We try to be very agile in what we do because we know that our data is used in ways that are very important,” she says. “We’re always self-evaluating and saying, ‘How can we take this to the next step, how can we make this better?’”