Why I Do Science: Vincent Resh 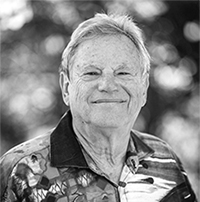 My teaching and research are focused on aquatic ecology. I concentrate on using the animals in rivers and lakes to evaluate the effects of pollution and to learn how to control the transmission of human diseases caused by waterborne vectors living in these habitats.

Unlike many of my colleagues, who were interested in science from childhood, I found my focus when I was an undergraduate. I was a philosophy student at Georgetown University in the 1960s, and I remember, during a required science course, suddenly saying to myself, “This is what I want to do with my life.”

Graduate school and early research at Berkeley brought me to the tropics, and eventually I began conducting long-term research in West Africa. There I worked on the control of river blindness—a parasitic disease transmitted by biting, river-dwelling blackflies that, at the time, resulted in as many as 30 percent of the local villagers going blind. To them, blindness was just part of their life cycle. I was able to spend several months a year there for 15 years and to see the success of a disease-control program. I was then able to follow this research with 10 years on the Mekong River in Southeast Asia, working to understand the effects of damming that great river for hydropower.

It’s an indescribable gift to have a career that directly benefits humans and to teach students who will go out and make a difference themselves. I’ve been fortunate to teach over 20,000 undergraduates and to have had 40 graduate students complete their training in my lab.

Working in the tropics for so long does have its drawbacks. One of my former students—who’s now the expedition physician at the California Academy of Sciences—once drew blood from me. He figured that I’ve been exposed to most parasites, so I’d be a good place for him to start looking for new ones!

ESPM professor Vincent Resh has been a faculty member since 1975 and serves on several international, national, and state science advisory boards focused on environmental and water issues.

Why I Do Science