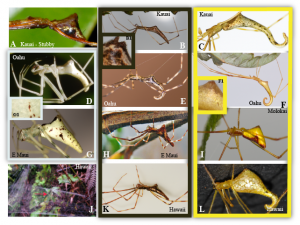 Kleptoparasitism (feeding on the webs of other spiders) is common in the theridiid subfamily Argyrodinae, a composite of several probably monophyletic groups, formerly considered as a single large genus (Argyrodes) and now recognized as distinct genera. Kleptoparasitism is characteristic of the Argyrodes; the genus Rhomphaea has a predatory attack behavior, while Ariamnes is characterized as free living, and can attack vagrant spiders, and flies that rest on the web. There are two lineages of Argyrodinae endemic to the Hawaiian Islands – A small lineage of Argyrodes kleptoparasites, and a much larger radiation of long-bodied species. The affinities of the long-bodied species to any one of genus is not clear, though they have been placed in Ariamnes. The Hawaiian “Ariamnes” are characterized by variably elongate abdomens; all are nocturnal. While most are free-living, several species have been found as kleptoparasites on the webs of different species of  endemic Hawaiian web-building Orsonwelles (Linyphiidae) and are also found as free-living individuals. It appears, therefore, that kleptoparasitism is facultative, unlike many species groups of Argyrodinae in which it appears to be obligate. Their affinities to other representatives of the genus outside the Hawaiian Islands are unclear. Current research focuses on the phylogeny of the Hawaiian long-bodied Argyrodes to determine how they diversified within and between islands.