spider genus Tetragnatha in the Hawaiian Islands has undergone spectacular adaptive radiation.The many different species exhibit a huge spectrum of colors, shapes, sizes, ecological affinities, and behaviors. Many species are web-building, with structural modifications of the abdomen that allow concealment within specific microhabitats. resulted in ca. 60 species that exhibit a wide array of colors, shapes, sizes, behaviors, and ecological affinities not observed in the genus elsewhere in the range of this genus. Many of the Hawaiian species build webs, which vary in terms of size and orientation, often being constructed in very specific microhabitats (e.g., under fern fronds, against tree trunks, in the open understory, or between the roots of trees). However, in stark contrast to their mainland relatives, the Hawaiian Tetragnatha tend not to build webs over water.

Thus, while the orb-webs are still fragile like the mainland taxa, their prey repertoire is no longer weak flying insects emerging from water. Some species have evolved specialist feeding. Most strikingly, one entire monophyletic clade of 17 species has abandoned web-spinning and adopted a wandering lifestyle, and is referred to as the “spiny leg” clade, the different species varying according to their daytime resting substrates.

species, Tetragnatha anuenue from the Big Island is remarkably diverse in color – all the colors contained in a single population. (anuenue is the name for “rainbow” in Hawaiian)

We are generating phylogenetic patterns of relationship for different groups of Hawaiian Tetragnatha,  and establishing relationships to mainland congeners, employing morphological and various molecular approaches. Using this information, we can test the role of morphological, ecological and behavioral attributes in dictating patterns of diversification and community assembly across the  archipelago. 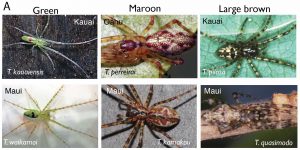 I have been examining how communities are assembled through speciation. These studies make use of the chronological arrangement of the Hawaiian Islands to visualize snapshots of evolutionary history. Within this context, we can study the spiders’ adaptive radiations over time in a natural time-series laboratory of evolution. We have found that, (1) species assembly is not random; (2) within any community, similar sets of distinct ecological types, or ecomorphs (“green” which sits on leaves; “maroon,” which is mostly on moss; “small brown,” among twigs; and “large brown,” on tree bark) arise through both dispersal and evolution; and (3) species assembly is dynamic with maximum species numbers in communities of intermediate age.