Most likely the redwood is experiencing symptoms related to cycles between drought and rainy periods. However, if there is a significant presence of California bay laurels intermixed with redwoods, there may be enough pressure from the SOD pathogen to also cause problems on redwoods, both native and exotic. Any SOD oak infections are likely directly connected to bay laurels, as both oaks and redwoods can become infected by the large number of spores produced on bay laurel leaves. The pathogen does not move from oaks to other trees.

When should I remove a tree?

How close does an oak tree have to be from a P. ramorum-infected bay laurel to be considered at risk of infection?

I have insect larvae in my oak acorns, what do to?

What’s the Basis for the 5′ Set Back Around Homes?

I have an oak tree that is leaking a dark substance 4′ up the trunk, but otherwise it looks healthy. I live in Alameda County. Do I need to be worried about sudden oak death?

We have old camellias and a pittosporum on our property that are healthy, but growing very close to coast live oaks. Should they be removed to help protect the oaks from SOD? 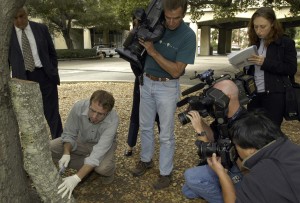 Are there any treatments for SOD?