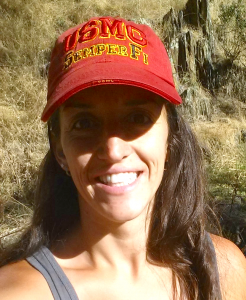 I grew up here in the Bay Area. After high school, I went to Chabot community college where I played volleyball and pole vaulted. After a year there I enlisted in the Marine Corps Reserves so I could continue classes. I earned my A.A. while in Iraq in 2009. Then I applied to Cal and found out I got in right before leaving for Afghanistan in 2014. Upon returning, I completely got out of the Marine Corps so I could be a more dedicated mother to my twin boys born in 2011. Now I will be graduating with a B.S. in Environmental Science in December 2016.

Despite hardships at home, I have managed to remain active and involved at school by participating with the Cal Veterans group and contributing in Kip’s lab. With the vets group I’ve gone on numerous adventures that range from white water rafting to planting trees with the Audubon Society to frequenting a local bar. I also served as an officer in the group for two semesters. Now I work in our center on campus as a peer advisor. I joined Kip’s lab during my second semester at Cal, not knowing anything about insects but eager to learn. Being determined to continue a career in science, my goal was to gain as many lab skills as possible. Now, over a year later I am attempting an entire grant funded project on my own at Mount Diablo.

I’d like to eventually go to grad school for marine biology, but in the more immediate future I welcome the consistency of a steady job.