Drylands are undergoing changes in vegetation cover and plant community composition in response to shifts in climate conditions and land use dynamics. Such changes can alter the fire regime and the surface energy balance with important potential feedbacks on hydroclimatic conditions. To date, some of the impacts of shifts in dryland vegetation remain poorly understood. Our group is investigating drivers and feedbacks of woody plant encroachment, exotic grass invasions, and increased CAM plant dominance. We evaluate their impact on fire frequency, rainfall regime, or exposure to freezing stress, while investigating feedbacks on vegetation dynamics. More specifically, we evaluate the role of ecohydrological processes in biotic-abiotic interactions in dryland ecosystems. We focus on the impact of hydrologic conditions on plant water stress, vegetation growth, and pattern formation. We also look at the impact of vegetation on the physical environment (e.g., soil moisture, temperature regime, precipitation) and biogeochemical cycling with a focus on positive feedbacks whereby plants improve their habitat and favor their own survival in “harsh” dryland environments. We evaluate the extent to which such feedbacks can lead to alternative stable states in vegetation.
We are currently investigating possible feedbacks between fire and precipitation in African savannas, the impact of fire on savanna-forest transitions, and the drivers of other major shifts in dryland vegetation in the context of global environmental change and land use dynamics.

Fire is a widespread agent of disturbance in African drylands, but the impact of fire on local precipitation remains poorly understood and large-scale observational evidence has been lacking.
Our research has demonstrated the existence of a link between fire and a reduction in precipitation across African drylands. Using 15 years of satellite observations over continental sub-Saharan Africa, we found that more extensive and later dry season fires lead to wet season rainfall deficits. Given the coupling among rainfall, fuel loads, and fire in African drylands, a negative interannual feedback may arise between fire and precipitation, whereby fires suppress precipitation, thereby reducing fuel load and fire in the subsequent season. The reduced fuel load would, in turn, increase precipitation, completing the feedback loop. This effect of fire-induced rainfall suppression appears to be associated with changes in surface albedo. 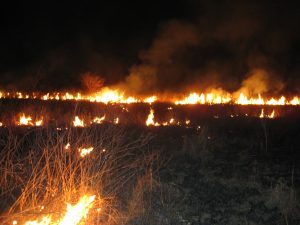 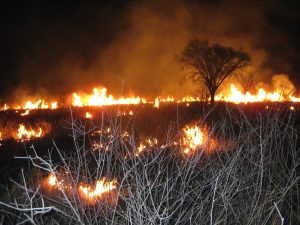 Plants with crassulacean acid metabolism (CAM) are increasing their abundance in drylands worldwide. The drivers and mechanisms underlying the increased dominance of CAM plants and CAM expression (i.e., nocturnal carboxylation) in facultative CAM plants, however, remain poorly understood. It is also unclear how the interaction between desert CAM species with co-occurring grasses will be affected by increasing CO2 concentrations, aridity, nitrogen deposition and soil salinity.
Our group is developing a set of experiments to investigate how nutrient, water and CO2 availability affected competition between paired CAM and grass species that co-occur in desert landscapes and California’s coastal grasslands. In the case of facultative CAM species we are also investigating how these factors may affect nocturnal carboxylation. Our results suggest that an increase in drought frequency is expected to increase CAM plant dominance in arid regions both under present and elevated levels of CO2 concentration and nitrogen deposition. 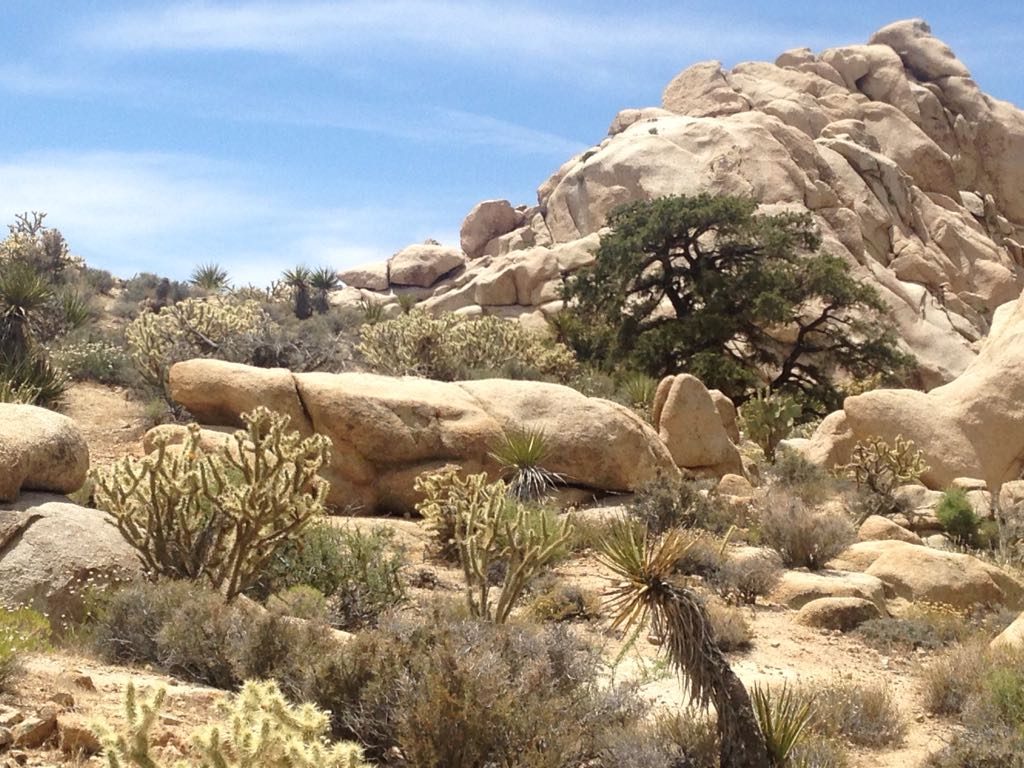 Understanding Savanna Structure and Dynamics through Field Observations and Modeling

Our group is developing ecohydrological models of savanna vegetation to develop new hypotheses on the role of hydraulic redistribution on tree-grass coexistence, the effect of interannual rainfall variability on the relative abundance of trees and grasses in savannas, and the different role played by fire-sensitive forest trees and fire-tolerant savanna trees on vegetation dynamics. We have found that hydraulic redistribution can induce tree-grass coexistence. Satellite data and model results show that increasing interannual rainfall fluctuations favor deep-rooted trees over shallow-rooted grasses in drier environments but favor grasses over trees in wetter environments.
We develop a model of hierarchical competition between pyrogenic grasses, ‘‘forest trees’’ adapted to closed-canopy competition and ‘‘savanna trees’’ that are inferior competitors in closed-canopy communities, but more resistant to fire. Our results suggest that having weaker competitive effects on grasses may be advantageous for savanna trees, leading to greater long-term abundance and stability. We label this the ‘‘enemy of my enemy hypothesis,’’ which might apply to species coexistence in communities defined by hierarchical competition or with species capable of generating strong ecological feedback.
In systems undergoing critical transitions between grasses and woody plants, we are investigating leading indicators with respect to sustained changes in environmental drivers or land use. 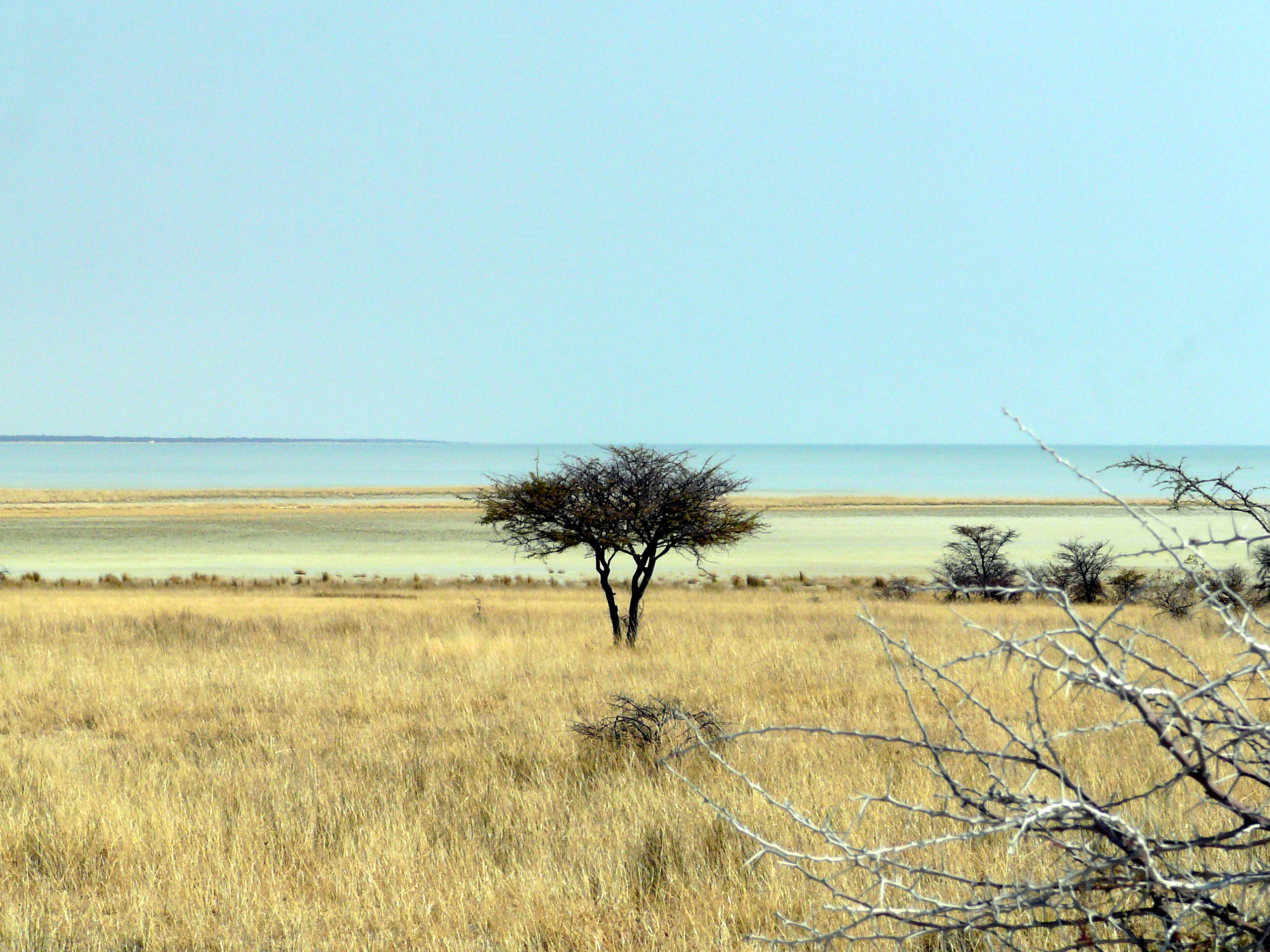 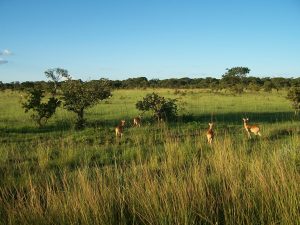 Environmental systems are typically forced by a number of drivers such as climate, and natural or anthropogenic disturbances, which are not constant in time but fluctuate. With the exception of processes dominated by deterministic oscillations (e.g., daily and seasonal cycles), a significant part of environmental variability is random, due to the uncertainty inherent to weather patterns, climate fluctuations, and episodic disturbances such as hurricanes, landslides, fires, insect outbreaks, and epidemics. The recurrence of random drivers in biogeophysical processes motivates the study of how a stochastic environment may affect and determine the dynamics of natural systems.
Recent climate change studies indicate that, in addition to trends in the mean values of climate variables, the interannual variability is also increasing. How will this increase in the variance of environmental parameters affect the dynamics of earth system? We are finding that noise could cause the emergence of new stable states, induce pattern formation, determine new bifurcations, or destabilize the stable states existing in the underlying deterministic dynamics. We use minimalist stochastic models to study this organizing effect of environmental fluctuations on ecosystem dynamics. 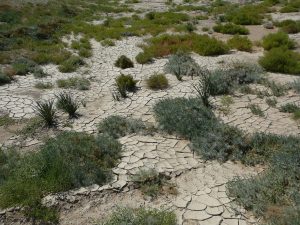