Interested in how hydropower dams affect flow regimes and downstream biodiversity? Here we sought to understand the ecological effects of flow management for hydropower (hydropeaking). Collaborating with Darold Batzer’s lab at UGA, we found that hydropeaking can spatially synchronize trait fluctuations and simplify the functional structure of downstream invertebrate communities. Still interested? Then read more below! 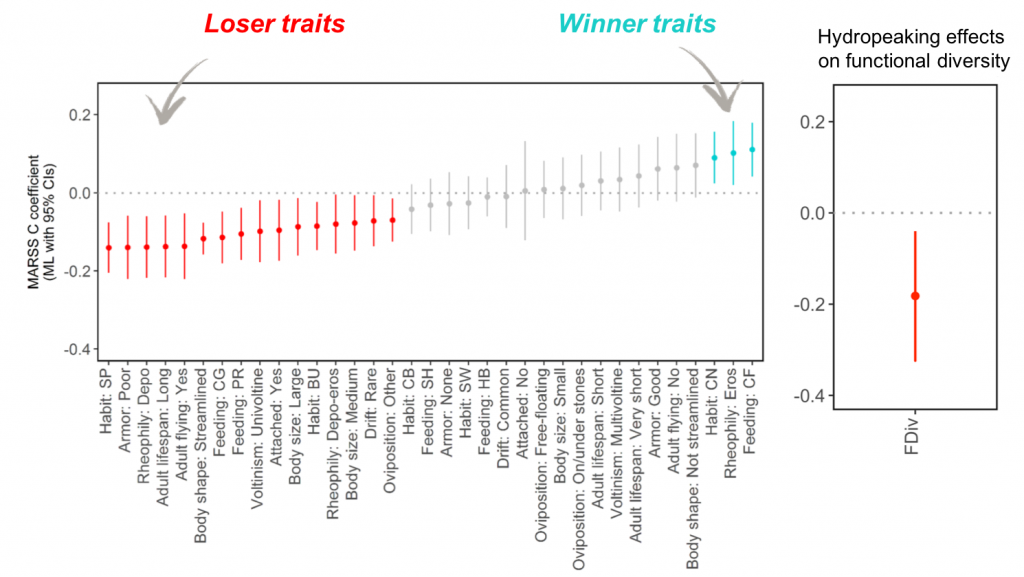 Novel flow regimes resulting from dam operations and overallocation of freshwater resources are an emerging consequence of global change. Yet, anticipating how freshwater biodiversity will respond to surging flow regime alteration requires overcoming two challenges in environmental flow science: shifting from local to riverscape‐level understanding of biodiversity dynamics, and from static to time‐varying characterizations of the flow regime. Here, we used time‐series methods (wavelets and multivariate autoregressive models) to quantify flow‐regime alteration and to link time‐varying flow regimes to the dynamics of multiple local communities potentially connected by dispersal (i.e., a metacommunity). We studied the Chattahoochee River below Buford dam (Georgia, U.S.A.), and asked how flow regime alteration by a large hydropower dam may control the long‐term functional trajectory of the downstream invertebrate metacommunity. We found that seasonal variation in hydropeaking synchronized temporal fluctuations in trait abundance among the flow‐altered sites. Three biological trait states describing adaptation to fast flows benefitted from flow management for hydropower, but did not compensate for declines in 16 “loser” traits. Accordingly, metacommunity‐wide functional diversity responded negatively to hydropeaking intensity, and stochastic simulations showed that the risk of functional diversity collapse within the next 4 years would decrease by 17% if hydropeaking was ameliorated, or by 9% if it was applied every other season. Finally, an analysis of 97 reference and 23 dam‐affected river sites across the U.S. Southeast suggested that flow variation at extraneous, human‐relevant scales (12‐hr, 24‐hr, 1‐week) is relatively common in rivers affected by hydropower dams. This study advances the notion that novel flow regimes are widespread, and simplify the functional structure of riverine communities by filtering out taxa with nonadaptive traits and by spatially synchronizing their dynamics. This is relevant in the light of ongoing and future hydrologic alteration due to climate non‐stationarity and the new wave of dams planned globally.