After spending the better part of my four years at Cal learning about environmental politics and food systems, I was excited to put my knowledge to use at a nonprofit working to create and sustain community gardens in Los Angeles (LA). The LA Community Garden Council (LACGC) is a very small nonprofit run by a handful of paid employees with support from a wider network of local board members with ties to various organizations such as the LA Food Policy Council. I worked with Julie, the executive director, Diana, the executive assistant, Al, the outreach director, and my fellow intern, Arissa. LACGC manages forty community gardens in LA and consults with more than 125 community gardens in the LA county. Many of the gardens they manage started out as abandoned concrete lots. With the help of LACGC, local residents worked to convert these plots into gardens where communities of diverse backgrounds come together under the LA sunshine to bond over their mutual love of gardening and grow nutritious and accessible food. During my internship, I learned about individual community gardens and the things that make them unique, but I also learned about the struggles these gardens will encounter in the face of the proposed LADWP water rate hike. 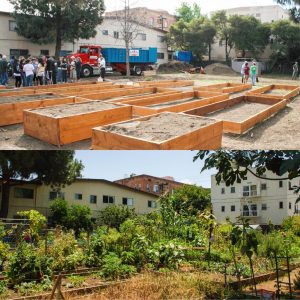 My internship at LACGC gave me insight into the process of creating a garden as well as the issues community gardens face. While some gardens struggled with physical barriers, such as graffiti, theft, and water issues, other gardens experienced issues with dealing with generational gaps, effectively functioning as a community, or adjusting to new leadership. Each garden is unique because it takes on the personality of its neighborhood and thus requires unique solutions. I had the opportunity to visit Fountain Community Garden and write an article for LACGC’s monthly newsletter. The garden started as a dirt lot in 2009 and has since become a second home to the gardeners where they can reconnect to their cultural roots, meet neighbors, and escape from the hustle and bustle of daily life in Los Angeles. From pickling to soap making, the garden hosts numerous workshops, potlucks, art programs, and a Dia de los Muertos celebration each year. In addition to the cultural benefits of Fountain, it also offers a number of ecological benefits, such as being an official Monarch Butterfly Waystation (a resting point for Monarchs on their way south for the winter).

The main project we worked on was the advocacy campaign bringing attention to the LA Department of Water and Power (LADWP) water rate hike. The water rate increase seeks to raise funding for better water infrastructure in Los Angeles. Public irrigation, including community gardens, falls under the ordinances under Schedule F. For community gardens, the hike amounts to a 289% increase in water bills by 2020. While there is a tremendous need for better water management in Los Angeles, the hike fails to take into account the impacts it has on community gardens. Gardeners at a typical 35-plot garden paying $5 per month in dues are looking at an increase to $15 per month by July of 2020. While some gardens in more affluent parts of the city would not be affected as severely, many more gardeners in low-income and elderly communities would not be able to bear the increased dues. The hike currently threatens the existence of many community gardens, as well as the livelihoods of their gardeners. 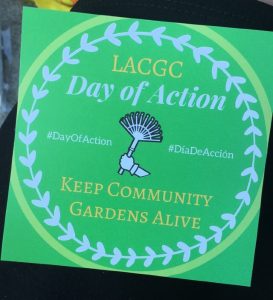 In addition to creating and helping maintain community gardens, LACGC is responsible for the gardens’ water bills. After this hike, they would not be able to pay for every garden’s water bill without increasing dues, and getting funding isn’t easy. One option would be to get funding from foundations. The problem is that most foundations would rather fund flashy projects with tangible results and paying for water bills isn’t the most attractive project. Finding grants is another option. While LADWP has given grants to water conservation projects, they were unresponsive about offsetting the increased costs for community gardens. A more stable option would be to secure long-term budgetary support from the city. In order to do so, LACGC organized a Day of Action at LA City Hall where gardeners and supporters met with city councilmembers and voiced their concerns regarding the hike.

The goal was to organize as many gardeners as possible to meet with city councilmembers and tell them their stories. We first met with the LA Food Policy Council and all of LACGC’s board members to brainstorm how the data would be presented to the mayor and the rest of the City Council. It was important to communicate to the city that they had to follow through with the sustainability goals they spent a lot of money creating. Their plans called for more green spaces and increased urban agriculture but did not allocate resources for the follow-through. The hike was in direct opposition to their lofty plans for urban agriculture. Our task was to demonstrate how their sustainability goals depended on community gardens. 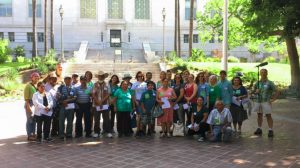 Our objective at LACGC was to create as much attention as possible. We wrote a letter to the mayor, set up meetings with city councilmembers, made fliers and wrote a petition to pass out at gardens and share online, and created as much social media buzz as possible. On the Day of Action, we met in front of LA City Hall. We assembled the gardeners and their supporters into groups with members of LACGC to target individual councilmember offices. Julie or another board member began with the introduction and then handed it off to the community gardeners who shared their experiences with community gardening and how the water rate hike would impact them and their families. Most of the councilmembers or their staff were very receptive and some had already begun doing their research on the issue and contacting LADWP. While they could not commit to providing funding on the spot, most were prepared to begin collaborating on solutions to the problem.

One of the biggest takeaways I experienced was witnessing the tangible effects from my own actions. In contributing to the social media buzz, I designed Instagram posts with infographics showing how the hike would affect water bills and impact gardeners. During the Day of Action, my job was to take photos and videos, as well as manage the LACGC Instagram. In the end, Julie informed me that she had spoken to LADWP after they’d seen the buzz we were generating online regarding the water rate hike. They wanted to set up meetings with LACGC and begin working together to address the issue. I was so excited to learn that our social media presence had caught the attention of LADWP and that they, and many other groups, were acknowledging and responding to the issue. 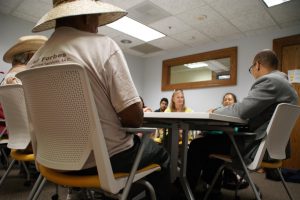 It was rewarding to see all the individual efforts we put in over the summer culminating in a successful advocacy day where gardeners could share their stories and engage with their city councilmembers. The entire process taught me a lot about community gardens and their management, social media, local policy, and the workings of nonprofits. It felt great to be part of a group working to solve food system issues and witnessing the results firsthand. My experienced left me better equipped to stand as an advocate for community gardens which, I’ve learned, are often overlooked among the massive sustainability measures undertaken by cities. Voting for councilmembers and water bills are part of the effort in reaching sustainability goals, but keeping government officials and their plans accountable are the other half. As a graduating senior, I hope to be able to use my experience to both defend and promote community gardens and all their benefits as major components of urban agriculture. 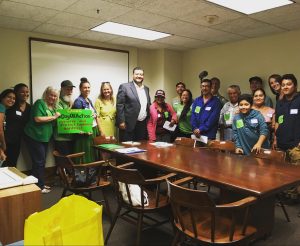