On one of the last days of my internship, I was reloading the Freshest Cargo mobile farmers market truck to end the day when a woman came up to the back on the truck and asked for just one more bunch of kale. I walked back into the truck to pull out a bunch of kale from the built-in fridge, and when I returned, she was chatting with another woman, who then also asked me for a bunch of kale. Slightly annoyed this time, I went back again and brought out some more kale. Without much thought I continued packing up the boxes of greens and crates of oranges. The women were still standing there chatting, and I quickly realized that they were trading recipes on how to best cook with kale. That moment, though small, felt like the perfect culmination of the entire semesters worth of work– two people meeting and trading knowledge over food, forming a connection and learning from each other’s’ experiences.

Our food system is broken; there’s little doubt that our capitalist driven, globalized food regime is a major culprit in the rising rates of food insecurity, metabolic diseases, unfair labor practices and so many other problems. To challenge that, we must work to reconnect what’s been broken. My internship with Fresh Approach was a small attempt to reconnect local Bay Area food systems.

Fresh Approach’s mission is to create long-term change in the Bay Area food system by reconnecting communities to California farmers, and spreading knowledge about food and nutrition. They execute their mission through three main programs areas: community outreach, nutrition classes, and the Freshest Cargo mobile farmers market truck. The idea is that each program on its own isn’t enough to create sustainable change, but if they can attempt to increase access to local food, educate about nutrition, and spread awareness, then that will give communities more tools to reconnect their local food system. 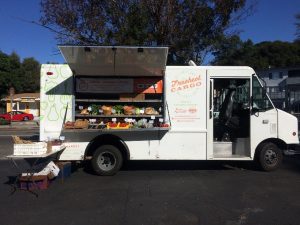 My focus during my internship was on the Freshest Cargo mobile farmers market program. Fresh Approach uses two food trucks to deliver fresh produce around the bay area, spanning as far south as San Jose up to Richmond. I participated in the Oakland route, which operated on Sundays at two different locations in east Oakland. The Oakland route in particular was established by working with community leaders to decide on locations that would best fit the community, who decided that stops at churches would be the most effective at reaching the community. Every Sunday, the route started at 7:45 am, where we picked up fruits and vegetables from the Temescal farmers market and loaded up the truck. Then we would stop at two churches in East Oakland for a few hours each. Our first stop, Allen Temple Baptist Church, is the one of the first black churches in Oakland and the first in East Oakland. Allen Temple has a long history as a center for racial justice of social justice, and has consistently been a center for political action in the last century—the church was adjacent to the headquarters of the Black Panther Party and helped support the party’s goals during the Civil Rights Movement.

It felt really meaningful to be able to support the community in continuing the legacy of food justice in that space, and it also felt important that I was in a supporting and not leading role. As someone who’s very much an outsider to the East Oakland community, I often found myself questioning whether or not it was helpful for me to be there at all—so often, people in privileged positions in society try to engage in social justice work in a way that’s oppressive and not empowering to the community, and as a white person working in a predominantly black community, I tried to view my position critically. For change to be sustainable and lasting, it needs to come from within the community and not be imposed on by others. Ultimately, I was working on a team with people who grew up in East Oakland and were integrated into the community, and working as support to them felt like a positive way to be useful and not take up too much space.

On the truck, one of the most common questions we get from customers is, “is this organic?”

None of the produce we sold was grown conventionally, but since most of the farms we get our produce from are somewhat local, many of them are too small to pay for the “Organic” certification. While they might be a no-spray and no-till farm that uses compost and biological control, they aren’t able to legally call themselves “organic”. In order to better communicate with customers that the food they’re buying is healthy and beneficial to the environment and the community, I decided to dive deeper into that middle ground between certified organic and conventional.

Working with the Freshest Cargo team, I created a comprehensive survey to send out to our partnering farms to gather more info on their farming practices. Hopefully, if we have more specific information on sustainable practices that the different farms employ, we can better communicate with our customers why local produce is better. The process of creating the survey was challenging but fun, as I had to do a lot of research on different sustainable farming methods and be able to fit that into an easily readable survey.