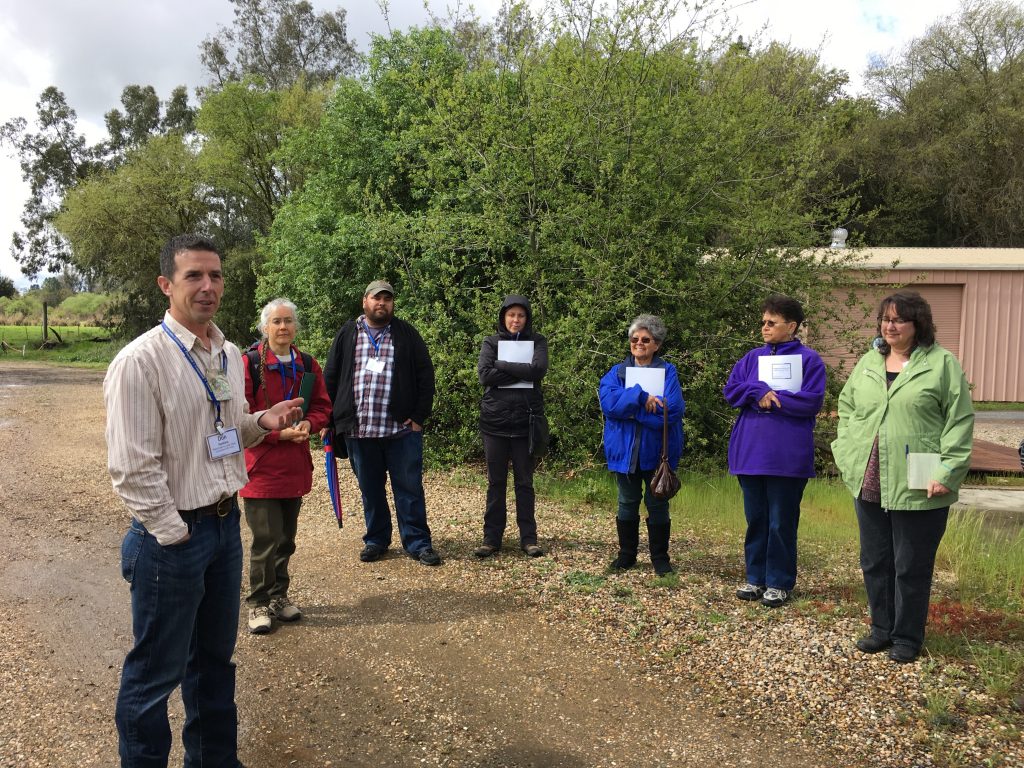 The University of California’s Agriculture and Natural Resources Division is home to California’s statewide county agricultural extension system, known as University of California Cooperative Extension (UCCE), which includes staff at both UC campuses and County Extension offices. In a recent statewide survey of UCCE staff, over 100 people reported that there are Tribes in their communities that might benefit from Extension, but only a third of these currently receive Extension services. In response, Jennifer Sowerwine, Janice Alexander, and Deborah Giraud recently offered a 2-day workshop to UCCE staff interested in supporting local Tribes. The gathering, “Creating Successful Partnerships with Native American Tribes” brought Tribal representatives, staff and academics to share strategies to help break down some of the barriers to working collaboratively with Tribal communities. 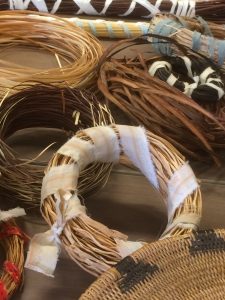 UCCE staff had requested information on Tribal history, government, and culture. At the workshop, the history of California Tribes was presented by Professor Beth Rose Middleton Manning and graduate student Vanessa Esquivido-Meza of UC Davis’s Native American Studies Department. Within the three major eras of pre-contact, Missions, and the American period, they described aspects of enslavement and forced labor, ecocide of plants and animals, land allotments, unratified treaties, Tribal Termination, and continuing Native resistance. In response to questions, they also covered what to call Tribal folks (use the Tribe’s name for themselves, and if in doubt, ask!); the “government-to-government” relationship between the Federal government and Tribes; Native Americans’ traditional view of ties to ancestral lands versus Western “property rights”; and some of the tremendous diversity among Native American communities.

Scott Williams, lawyer for the Yurok Tribe, spoke about Tribal governments and Federal Indian law. He emphasized the importance of understanding the history of slavery and genocide of Native Americans in order to work with Tribes today – that Tribal folks we meet today are survivors. Modern Tribes must negotiate both their unwritten laws and newer written constitutions, ordinances and Tribal court systems imposed by the Federal government. Williams discussed the three intertwined governments operating in the US – federal, state and tribal – and the struggle for federal recognition faced by 81 California tribes today.

UC Berkeley postdoc Dan Sarna discussed the concept of “salvage anthropology,” the approach many early 20th century academics took to researching cultures they had assumed were disappearing, which resulted in the removal of artifacts, cultural information and human remains from tribal territories. In contrast, Sarna and others’ collaborative work in the Klamath Basin, with the Karuk Tribe, has focused on the Tribe’s priorities for ecosystem restoration and cultural revitalization. Virginia Hedrick, Director of Policy and Planning for the California Consortium for Urban Indian Health, described the experience of the one in seven Indians living in big California cities, and emphasized several elements in successful outreach to tribes: the importance of “doing the assessment,” that is, asking the community what it wants to see in new programming; the various points of contact for a Tribe (Tribal Council, Tribal departments such as Education, Tribal TANF); and the difference it makes to have culturally appropriate imagery, such as Native people and baskets, on materials designed for Tribes. 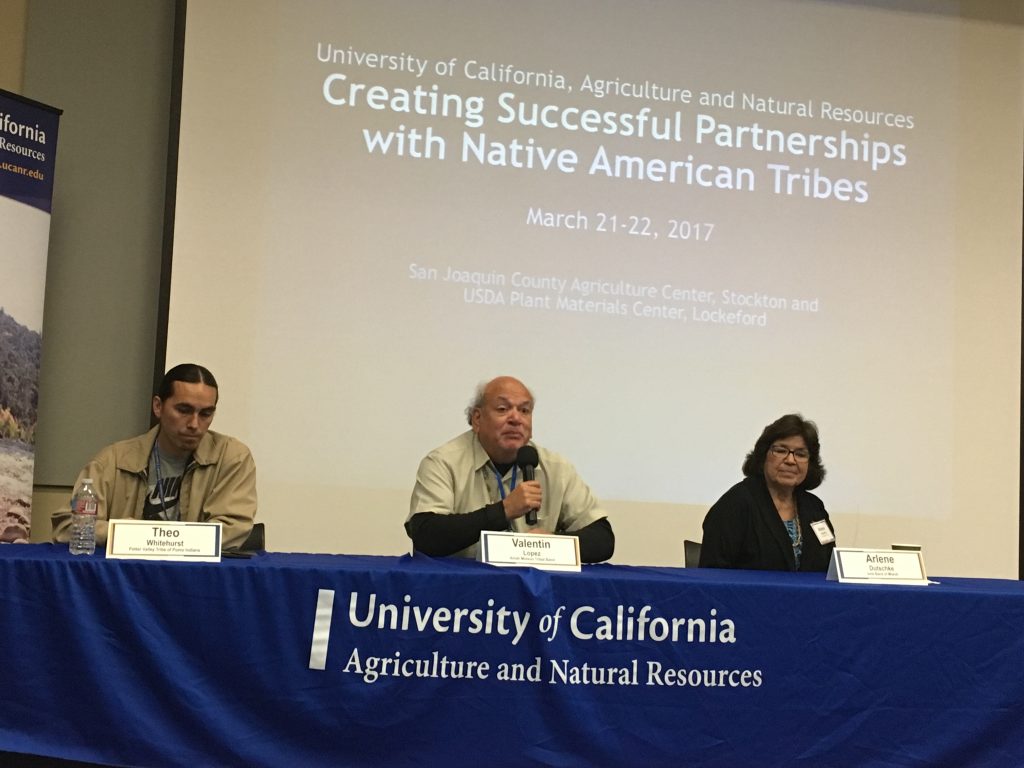 Arlene Dutschke of the Ione Band of Miwok Indians, Valentin Lopez, Chairman of the Amah Mutsun Tribal Band, and Theo Whitehurst of the Potter Valley Tribe of Pomo Indians shared personal stories, and told the group about their diverse tribes and experience as land stewards with or without Federal recognition. Lopez described creating the Amah Mutsun Land Trust to steward ancestral lands as caretakers of Mother Earth; despite lacking formal title to their former land base, the Tribe now has land management agreements with numerous universities and agencies. All three panelists stressed the importance of taking time to build relationships and trust with Tribes for successful projects to happen.

Janice Alexander, Forest Health Program Coordinator for Marin County UCCE, presented her experience with the Western Region Tribal Integrated Pest Management Group and explained how listening was the key to understanding Tribal priorities, which often differed from non-Tribal goals. Deborah Giraud shared information about the Federally Recognized Tribal Extension program, which has about 45 partnerships in 19 states. Jennifer Sowerwine shared reflections on the USDA-AFRI-Klamath Basin Tribal Food Security Project, especially the importance of de-centering the University as the sole site of “expertise” and moving toward a more collaborative and participatory approach to research and extension. On this Federal grant, Tribal partners are significant sub-contractors, and are equal partners in developing and evaluating the research, education and outreach program. 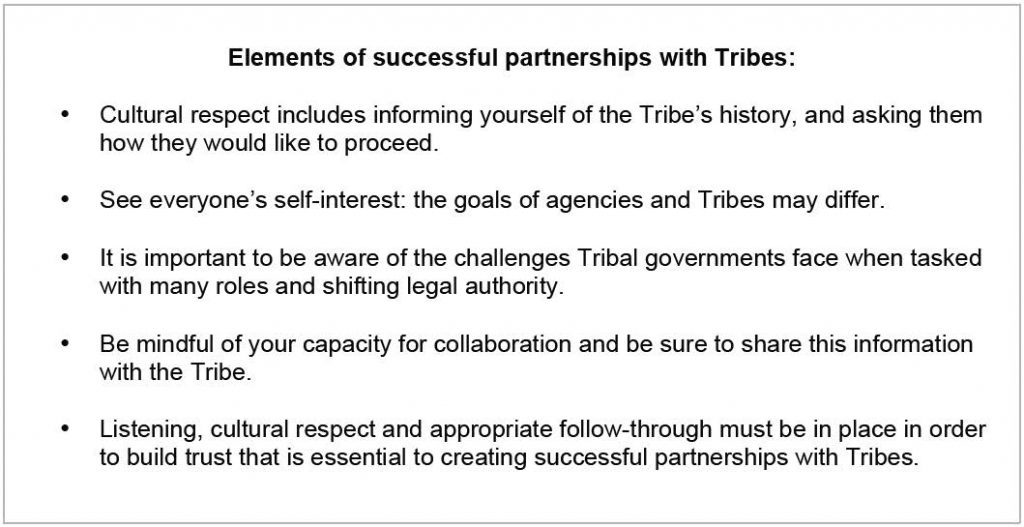 The group toured the USDA Natural Resource Conservation Service (NRCS) Plant Materials Center, and learned about the importance of valuing traditional ecological knowledge. Jennifer Bates, a renowned Miwok basket weaver, shared information about her craft, and basket weavers’ efforts to reduce pesticide spraying in areas where they collect materials. Participants also heard from Don Hankins, professor at Cal State Chico and cultural practitioner from the Mokelumne Tribe, about the cultural importance of fire ecology and understanding how the land and its inhabitants communicate in order to care for it well. We also learned about the funding possibilities for Tribal conservation projects through the NRCS from Pedro Martinez and Keir Johnson of the Intertribal Agriculture Council. Danny Manning of the Greenville Rancheria described the process of developing the Greenville Rancheria’s fire response team and implementing collaborative fire management projects on different land designations with Tribal elders and cultural monitors.

In small groups, participants listed elements of successful partnerships, and took some time to begin developing workplans and next steps around possible collaborative projects. We’ll keep you posted!