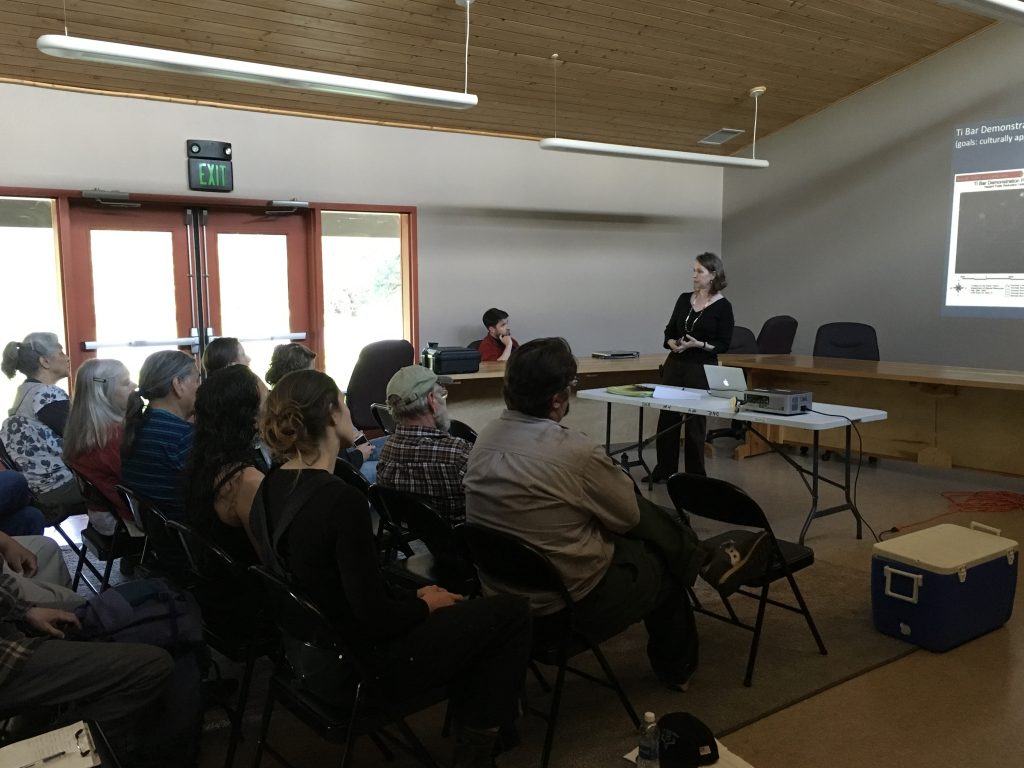 On Thursday, April 20th, two affiliates of the Karuk-UC Berkeley Collaborative and the AFRI Klamath Basin Tribal Food Security Initiative presented their research to the community as part of the Píkyav Lecture Series organized by the Karuk Tribe Department of Natural Resources.   The newly launched Píkyav Field Institute aims to improve the academic performance and college and career readiness of Karuk tribal youth. The lecture series is conceptualized to expand opportunities to learn from the time-honored traditional knowledge, practice and belief systems of their ancestors, as well as learn about the Karuk Tribe and academic partners’ collaborative research done over the past decade within the Tribe’s Aboriginal Territory and with Karuk Cultural Practitioners. The series began with two lectures (4/6 and 4/12) on Sudden Oak Death led by co-presenters from UC Cooperative Extension, the Mid Klamath Watershed Council and the Karuk Tribe. Caused by the plant pathogen Phytophthora ramorum, this disease has devastating effects on key cultural species. In late April, the series followed with lectures on the importance of co-management of tribal natural and cultural resources.

Sibyl Diver, currently a post-doctoral researcher at the Department of Earth System Science at Stanford University, presented on Co-management as a Catalyst: Pathways to Post-Colonial Forestry in the Klamath Basin. Co-management (collaborative management) frameworks are supposed to facilitate sustainable resource management and more equitable power-sharing between state agencies and Indigenous communities. However, there is significant debate about who benefits from co-management in practice. Diver’s work addresses two competing perspectives, which alternately portray co-management as an instrument for co-optation or for transformation. Through a case study of co-management negotiations involving the Karuk Tribe and the U.S. Forest Service in the Klamath Basin of Northern California, Diver discussed how Indigenous communities use co-management to build greater equity in environmental decision-making, despite its limitations. Diver developed the concept of pivot points to describe how Indigenous communities like the Karuk Tribe are simultaneously following existing state policies and subverting them to shift federal forest management. The pivot point method shows one way communities are addressing Indigenous self-determination goals and colonial legacies through environmental policy and management. 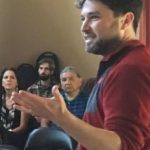 Dan Sarna, a post-doctoral researcher at University of California, Berkeley’s Department of Environmental Science, Policy and Management, presented on Decentering Watersheds and Decolonizing Foodscapes: Eco-cultural Approaches to Scale for Klamath Environmental Governance. The watershed has long captured political and scientific imaginations and provided a primary social and spatial unit for environmental governance. However, collaborative governance at the watershed scale leaves out important ecological and social dynamics as well as tribal community perspectives on eco-cultural revitalization. Based on the history and cultural politics of collaborative watershed management in the Klamath River Basin, Sarna argues for better place-based and community-driven approaches to the question of scale (i.e. what biophysical or spatial areas, political boundaries and timeframes should be used for analysis and decision-making) in environmental governance.

Sarna compared the watershed with two other community-based spatial frameworks – firesheds and foodsheds – and considered their implications for water governance, ecosystem restoration, tribal sovereignty and collaborative natural resources management. He outlined an eco-cultural approach to scale, grounded in Indigenous knowledge and values, in which water is one of many cultural and natural resources that are interconnected and managed across multiple scales and temporal ranges.  This approach emphasizes democratizing scale, or opening up decisions about appropriate scales for environmental governance to inclusive debate, and decolonizing scale, or untangling histories and legacies of colonialism through developing new ways to make scales through community and place-based processes.