A black-tailed deer at the University of California’s Hopland Research and Extension Center, seen after the 2018 Mendocino Complex Fire. Deer from burned areas had to work harder and travel farther to find green vegetation, and researchers noticed a decline in body condition in some of the animals.

When a massive wildfire tears through a landscape, what happens to the animals?

While many animals have adapted to live with wildfires of the past — which were smaller, more frequent and kept ecosystems in balance across the West — it’s unclear to scientists how animals are coping with today’s unprecedented megafires. More than a century of fire suppression coupled with climate change has produced wildfires that are now bigger and more severe than before.

“We don’t have much information on what animals do while the flames are burning, or in the immediate days that follow after wildfires,” said co-lead author Kaitlyn Gaynor, a recent alum of the Department of Environmental Science, Policy, and Management in the Brashares Lab, who is now a postdoctoral researcher at the National Center for Ecological Analysis and Synthesis at UC Santa Barbara. “It was kind of a happy accident that we were able to see what these animals were doing during the wildfire and right after, when it was still just a desolate landscape.” 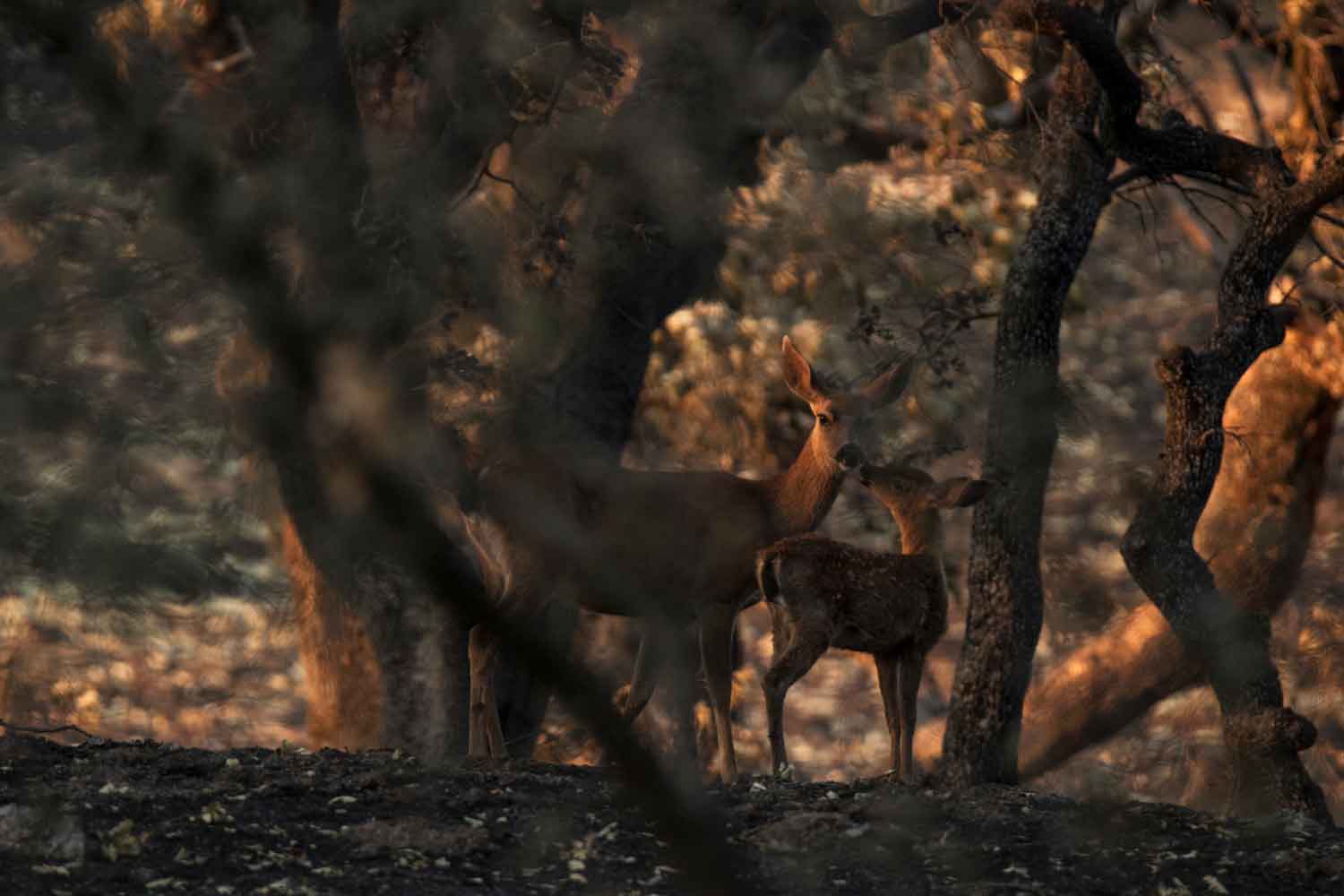 A black-tailed deer with her fawn, seen after the 2018 Mendocino Complex Fire.

The researchers were surprised by what they learned. Of the 18 deer studied, all survived. Deer that had to flee the flames returned home, despite some areas of the landscape being completely burned and void of vegetation to eat. Most of the deer returned home within hours of the fire, while trees were still smoldering.

Having access to this location information — from previously placed wildlife cameras and GPS collars — is rare when studying how animals respond to extreme and unpredictable events, like megafires.

“There are very few studies that aim to understand the short-term, immediate responses of animals to wildfires. When a fire sweeps through and dramatically changes the landscape, its impact in those initial days is undervalued and absent in the published literature,” said co-lead author Samantha Kreling, a doctoral student at the UW School of Environmental and Forest Sciences. Kreling was an undergradate student in ESPM working in the Brashares lab at the time of the fire.

The study took place northwest of Sacramento at the University of California’s Hopland Research and Extension Center, where the researchers were studying the movements of black-tailed deer. Before the Mendocino Complex Fire started, the team had placed tracking collars on 18 deer and positioned several dozen motioned-activated wildlife cameras across the area. The Mendocino Complex Fire burns across the University of California’s Hopland Research and Extension Center on July 27, 2018.

On July 27, 2018, the research team based in Hopland saw smoke nearby. Within hours, they were told to leave immediately and not return to the property, as large flames swept through. In total, a little over half of the research center’s land was burned by the Mendocino Complex Fire that was, at the time, California’s largest wildfire.

Kreling, who needed data from the site for her senior-year undergraduate thesis at UC Berkeley, decided to pivot — or, in the words of her collaborators, “turn lemons into lemonade.” The wildlife tracking technology and photos allowed Kreling and co-authors instead to look at how deer change their use of space during and immediately after large disturbances like wildfires, and how this event influenced their body condition and survival.

“Seeing the drastic changes on the landscape got me wondering what it’s like for animals on the land to actually deal with the repercussions of having an event like this sweep through,” Kreling said. “Having the infrastructure in place was very useful to see what happened before, compared to what happened after.”

Despite the challenges of having little to eat, all of the deer returned soon after the fire. Deer from burned areas had to work harder and travel farther to find green vegetation, and researchers noticed a decline in body condition in some of these animals. Still, their loyalty to home is a tactic that likely helped this species survive past wildfires A black-tailed deer wearing a GPS tracking collar is seen by a wildlife camera on the study site, a couple of months after the 2018 Mendocino Complex Fire moved through.

It’s unknown whether this loyalty-to-home strategy will prove helpful, or harmful, in the future. Smaller wildfires encourage new vegetation growth — tasty for deer — but massive wildfires can actually destroy seed banks, which reduces the amount of plants available to eat. In this case, some of the deer that had to expand their home range to eat did so at the expense of their body condition.

“These deer have evolved this behavioral strategy that has clearly worked for them, but the big question mark is, as fires get more intense and frequent, will this behavior actually trap animals in these habitats that are seeing massive disturbances on the scale of nothing that has happened before in their evolutionary history,” Gaynor said.

The specific patterns observed with these deer likely can’t be applied to other large mammals in different regions, the authors said. But it’s an interesting case study to explore what extreme disturbances, like large wildfires, might mean for animals. Meanwhile, co-author Kendall Calhoun, a doctoral student in the Brashares lab, is continuing to look at the long-term effects of the fire on the health and reproductive capacity of this population of deer, which is still being tracked.

This research was funded by the California Department of Fish and Wildlife.

Other co-authors are Alex McInturff and Justin Brashares at UC Berkeley.