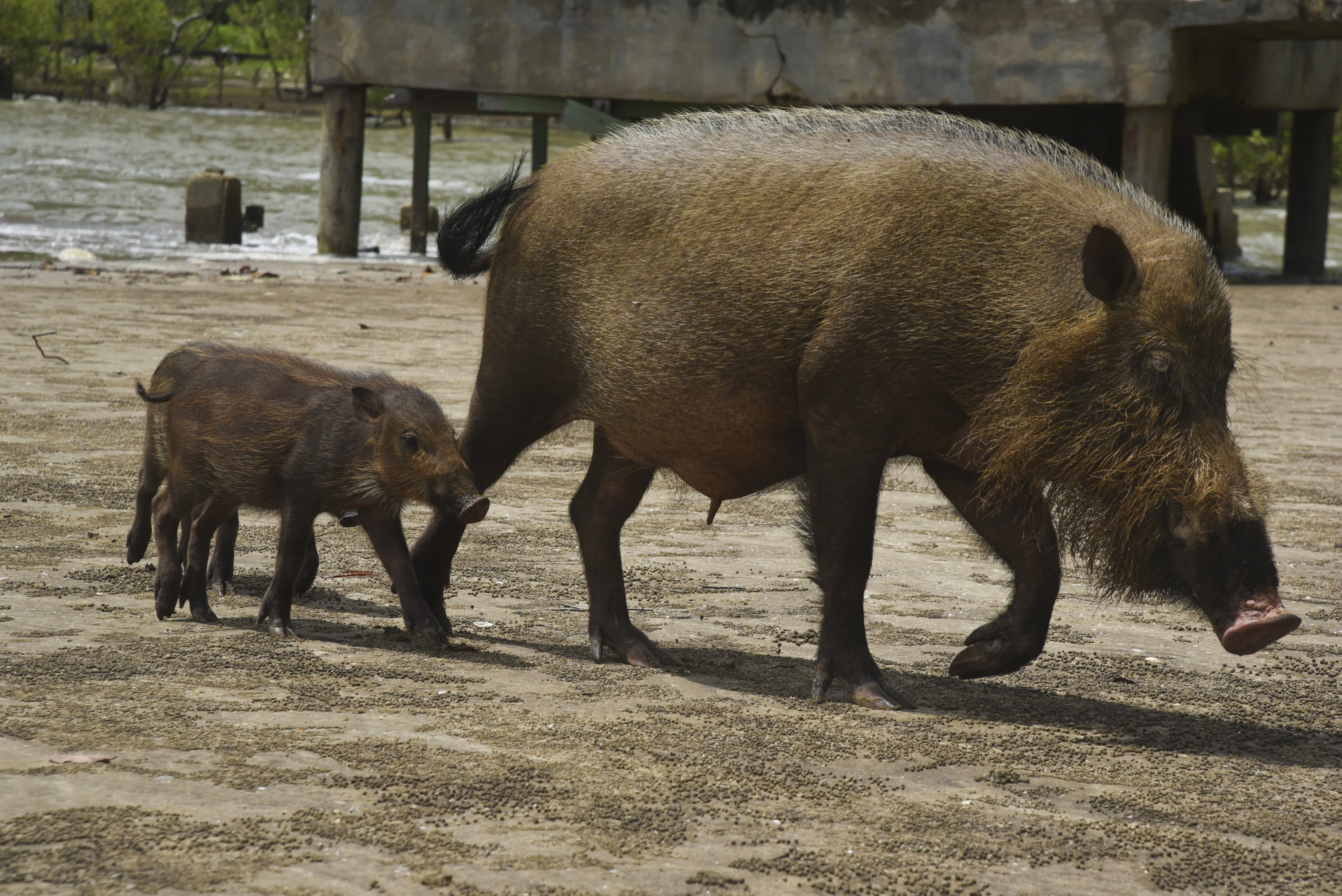 An adult female bearded pig with her two piglets in tow. Photo by Jessica Suarez.

A new study co-authored by Environmental Science, Policy, and Management (ESPM) alumnus and lead author Dave Kurz, published today in the journal People and Nature,  describes how oil palm plantations in Borneo not only affect ecological landscapes, but shift social landscapes as well. Oil palm cultivation expansion, and the urbanization associated with it, can alter various land-use patterns, economic relationships, access to land, and social practices, the authors found.

Kurz and his colleagues focused on  the Indigenous Kadazandusun-Murut (KDM) peoples in Sabah, Malaysian Borneo. KDM peoples, the largest Indigenous group in Sabah, have traditionally hunted in the region’s extensive rainforests. However, now that oil palm plantations cover roughly one-quarter of the state, they have adapted some of their hunting patterns. With an international research team from Malaysia, the United Kingdom, Australia, and the United States, Kurz investigated the various ways that oil palm expansion has impacted KDM millennia-old hunting practices. 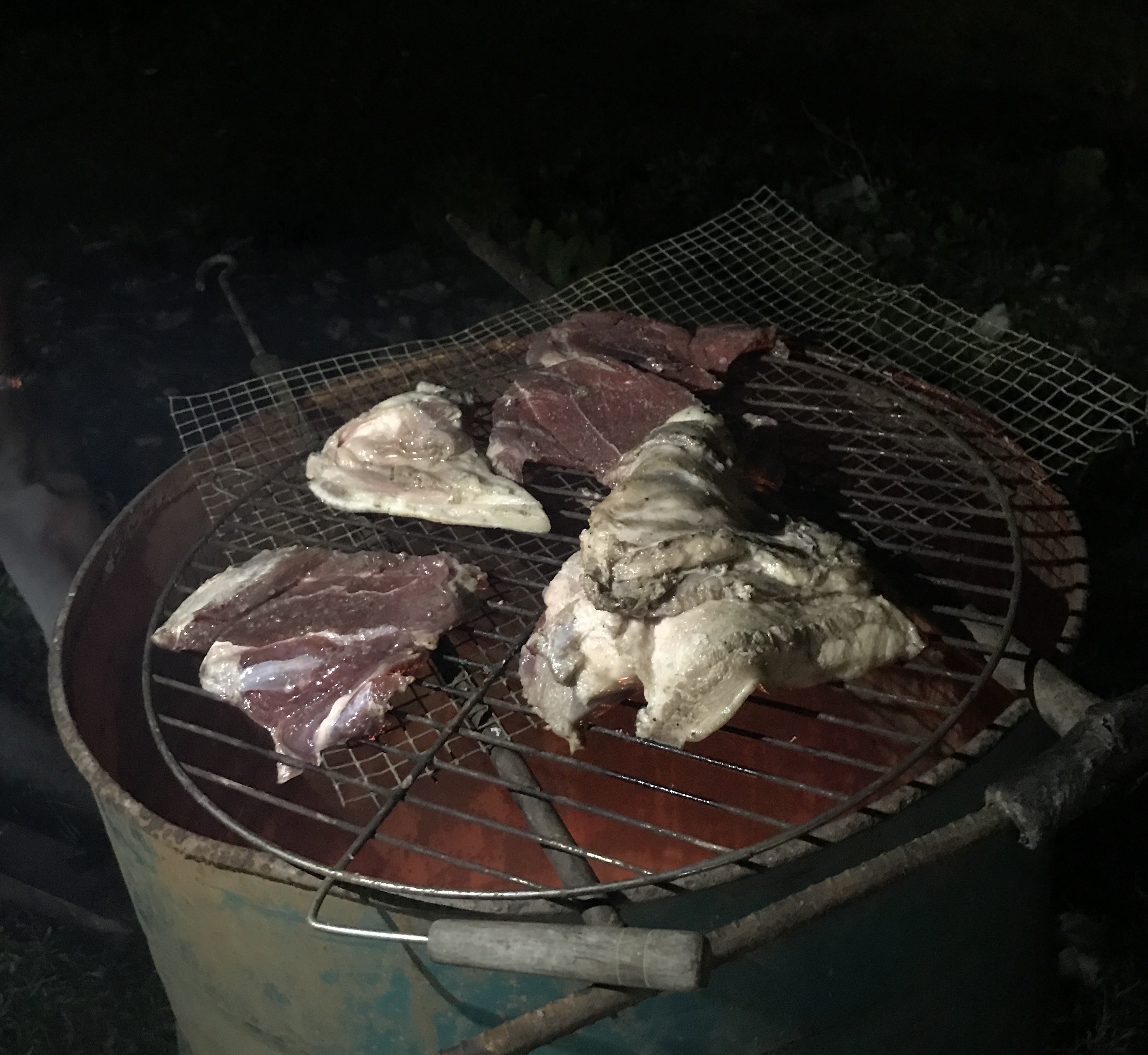 In the study, the researchers describe how, after oil palm replaces forest, Indigenous communities who have accessed forest resources for millennia often move to cities. Moreover, evidence from other research details how livelihoods may shift from subsistence-based activities like farming, hunting, and gathering towards market-based—and sometimes exploitative—industrial oil palm production. As social and environmental changes occur in tandem, the researchers found, well-established human-environment connections are reshaped significantly.

In particular, the researchers focused on KDM hunting practices and the popular game animal, the bearded pig. Bearded pig meat is often enjoyed at KDM celebrations and feasts, and during everyday meals, and gifting of the meat is an important cultural tradition in KDM communities.

In the past, hunters typically traveled to the forests or mangroves to hunt pigs—for instance, with dogs and a spear, on foot with a gun, or using snares—but now more hunters are moving their activities to both industrial and smallholding oil palm plantations.

Bearded pigs, like Eurasian wild boar, are drawn to the abundant oil palm fruits in plantations, and they often enter plantations to forage. Industrial plantations are typically planted in rows—often spaced between rows and with less understory growth—which makes hunting in such areas easier.  In response, hunting styles have shifted to involve more waiting than active searching, the researchers found. 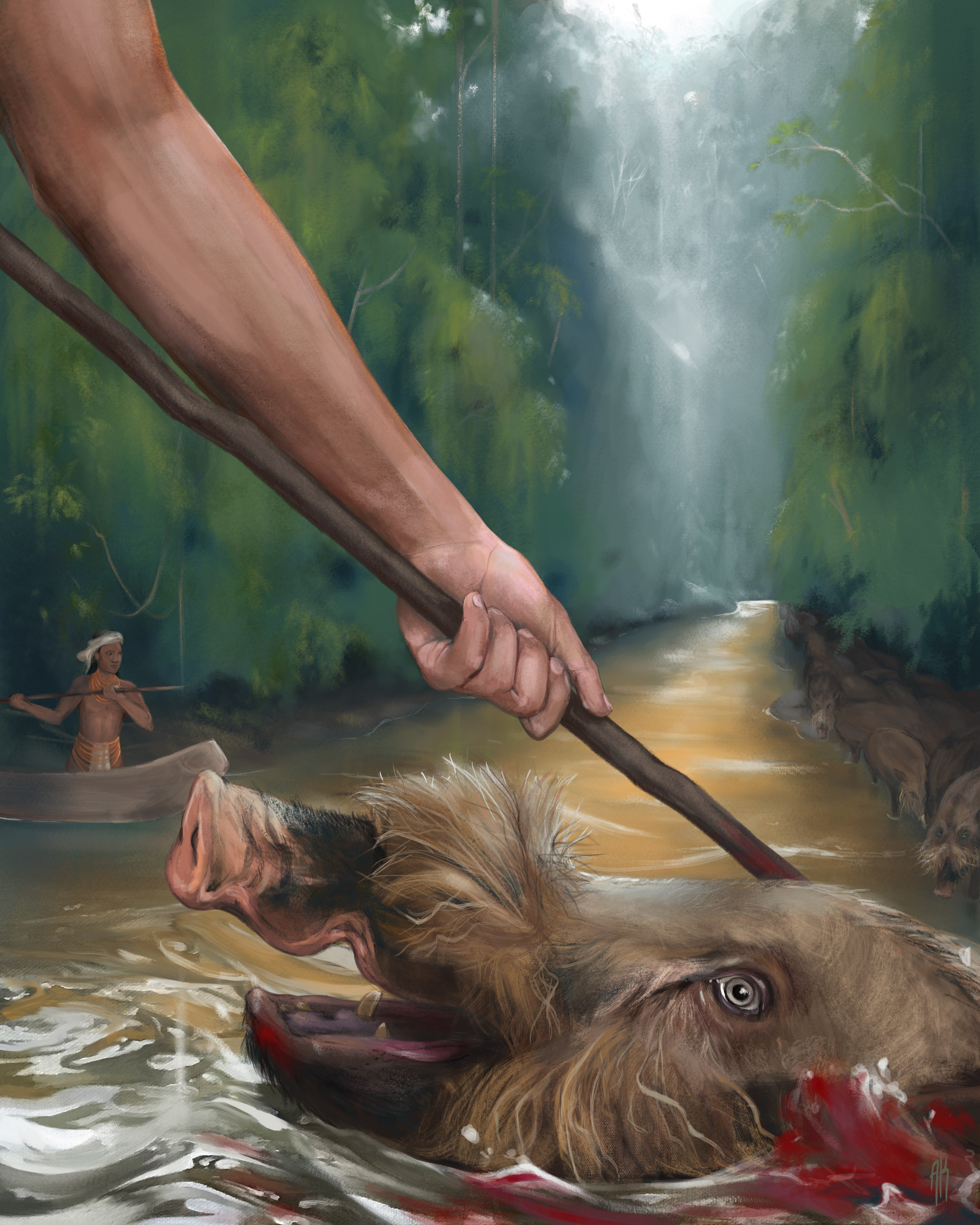 An artistic depiction of a traditional form of Indigenous bearded pig hunting. Artwork by Amy Koehler.

Alongside changes in hunting practices, the pigs’ behavior changed as well. Hunters noticed that pigs shifted foraging habits and preferences to feed more in the plantations, and entered the plantations at  more predictable times. “It’s very rare to meet a pig who hasn’t eaten oil palm,” remarked one KDM hunter who Kurz and his colleagues interviewed.

Both scientists and the media have extensively documented the environmental destructiveness of industrial oil palm agriculture, but how it impacts human livelihoods and cultural traditions is only recently becoming clearer. “Transformations of long-standing social practices—like the more than 40,000-year history of hunting bearded pigs—speak powerfully to the reach of oil palm beyond its physical footprint,” said Kurz.

Kurz emphasized that the diverse ramifications of oil palm production must be understood for long-term social and environmental sustainability. The researchers recommend management policies that allow flexible, location-specific approaches, and they emphasize the importance of ensuring equitable access to the dietary and social benefits of hunting while conserving pig populations and habitat.

RT @ESPM_Berkeley: On Dec 5th, the Cal Forestry Club will host its annual Christmas tree sale at the south side of Mulford Hall from 9am to…

RT @UCBerkeleySPH: The 3-year Toxic Tides study from @rmfrosch and colleagues at @UCLAFSPH is the first systematic look at the #Environment…

RT @BerkeleyGse: Our @UCBerkeley undergrads in @TravisJBristol's "What is the Role of Race in Urban Schools?" class shared their provocati…