Donald Kaplan, expert on plant shapes and forms, dies at 69 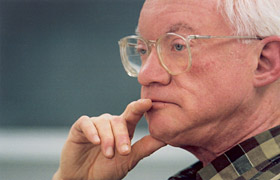 Donald Robert Kaplan, professor emeritus of plant biology at the University of California, Berkeley, and an influential expert on the development of the diverse forms and shapes of plants, has died at the age of 69.

Fellow botanists credit Kaplan's detailed studies and analyses of leaf development for setting the standard in the field of plant morphology.

"His influence on plant development and structure is large, and will be felt by all those he taught or who read his papers," said Ann Hirsch, professor of molecular, cell and developmental biology at UCLA and a former graduate student of Kaplan's. "Don's research and teaching opened our eyes to the tremendous diversity of plant form, as well as how integrated all these forms are. It will take another unique thinker some day to link Kaplan's ideas on leaf form with what we have learned about the genes involved in leaf development."

Lewis Feldman, UC Berkeley professor and former chair of plant biology, said Kaplan's approach to research differed from most of his U.S. colleagues at the time. "Most American morphologists approached development in a taxonomic way, beginning with ferns and moving up to flowering plants," said Feldman. "Kaplan's approach cut across this spectrum to try to understand similarities between plants. What that did was show people a different way of looking at development."

Kaplan was, fundamentally, a developmental biologist. "People looked to his work to understand evolutionary relationships between plants, and how the same developmental mechanism can be used by plants that are not related," said Darleen DeMason, professor of botany and plant sciences at UC Riverside and one of Kaplan's former graduate students. "Just as researchers study how the fingers of your hand are formed during embryogenesis, Don Kaplan was interested in how form was generated in plants."

Colleagues said that Kaplan's studies in plant morphology stemmed from his love of pure science and knowledge rather than thoughts of how his work could be applied. Nevertheless, they noted that his work has implications for the agricultural sciences, providing a foundation for molecular manipulations to improve crop or ornamental plants.

But as well-regarded as Kaplan was for his research, colleagues and former students remember him as a devoted teacher. "Being a major professor or research mentor was a lifelong commitment for Don Kaplan," said DeMason. "He remained my friend and colleague, and provided me with unwavering support, throughout my career."

Hirsch also noted that Kaplan never asked to be a co-author on any of his students' papers, instead encouraging them to publish their work on their own. This helped his students develop distinctive and highly original research projects. "He was a true mensch," she said.

Kaplan was born in Chicago on Jan. 17, 1938. As a teenager, he caddied for famed Chicago golfer Chick Evans, founder of the Evans Scholars Foundation, a college scholarship program that funded Kaplan's undergraduate education at Northwestern University. In 1960, Kaplan graduated Phi Beta Kappa with a bachelor's degree in biology from Northwestern University.

He continued his studies as a graduate student at UC Berkeley, earning a Ph.D. in botany in 1965. Later that year, he joined the newly established UC Irvine campus as an assistant professor of botany and one of its founding faculty members.

In 1968, he returned to UC Berkeley as an associate professor, and was promoted to full professor in 1976. He retired from UC Berkeley in 2004, but remained active in his field.

Kaplan earned many honors and awards throughout his career, including the Alexander von Humboldt Distinguished Senior U.S. Scientist Award, the Botanical Society of America's Merit Award for Outstanding Contributions to Botanical Science and the UC Berkeley Distinguished Teaching Award. He received a Guggenheim Fellowship and was a fellow of the California Academy of Sciences. Kaplan also held positions as a National Science Foundation postdoctoral research fellow and a Miller Research Professor.

When not immersed in the world of plants, Kaplan nurtured a strong interest in classical music, opera and railroads. He authored several articles about railroads, as well as a book, "Duneland Electric," about the interurban electric railway that runs from Chicago along the south shore of Lake Michigan to South Bend, Ind.

He is survived by his wife, Dorothy, of Kensington, Calif.; two sons, Andrew of Las Vegas, Nev. and Timothy of Pleasant Hill, Calif.; and a sister, Barbara Goldstein of Salt Lake City, Utah.

The family requests that donations in Kaplan's memory be made to the Evans Scholars Foundation, 1 Briar Road, Golf, IL 60029, or to the UC Botanical Garden (checks made payable to UC Regents), 200 Centennial Drive, Berkeley, CA 94720.

Congratulations to professor of agricultural and resource economics Meredith Fowlie on becoming a faculty director… https://t.co/bjHS9ZYG2t

The abrupt disappearance of #Neanderthals has long puzzled scientists. But a recent study co-authored by… https://t.co/uvxfQ06ZDn

RT @UCBerkeleyFood: TODAY: Join BFI affiliate @tinakim for this week's @UCBerkeley Berkeley Conversation, a discussion on race, law, and he…