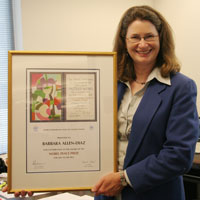 Professor Barbara Allen-Diaz has always been a little ahead of the curve. After fast-tracking
through her M.S./Ph.D. at UC Berkeley in 4 years, Allen-Diaz was snapped up by the U.S. Forest Service, only to be lured back to Cal to become the first female range management faculty in the country. In the mid-1990s, she was tapped to participate in the second installment of a massive, international research effort called the Intergovernmental Panel on Climate Change, which had the prescient hunch that humans were having a significant impact on global climate.

That pioneering research culminated in the presentation of the Nobel Peace Prize to Al Gore and the IPCC's 2,000 scientists including Allen-Diaz and ESPM’s Inez Fung.

Allen-Diaz’s contributions focused on the effects of climate change on rangeland, which comprises 51% of the planet’s land surface. Among her team’s early findings were that changes in climate directly alter the species composition of landscapes, shifting the boundaries between rangelands and other ecosystems.

Her team also recommended that greenhouse gases could be curbed by improving soil and
vegetation management in order to maximize carbon sequestration. Improved technology and data collection techniques in subsequent years have only reinforced these findings.

Despite years of public foot-dragging and misinformation, the role of humans in climate change
has finally gained traction in the American conscience, thanks to the combination of savvy ecomarketing (see An Inconvenient Truth) and the squeaky-wheeled persistence of the scientific community.

Yet the skeptics remain.

In the weeks following the presentation of the Nobel Prize, Allen-Diaz said, “I was amazed to be asked several times by educated people whether I really believe that human beings have anything to do with, much less cause, global warming. I gently explain to them the preponderance of evidence that indeed indicates we must change our lifestyles now; our world as we know it is in peril.”

In the years since her involvement with IPCC, Allen-Diaz has continued pursuing a vigorous research program on rangelands. Among her projects are studies on the effects of cattle grazing on plant communities and the response of range vegetation to fire.

Despite all the accolades, Allen-Diaz traces her interest in ecology back to a simpler time and a simple goal, yet one that transcends generational gaps. “Growing up in the late ‘60s and early ‘70s, I wanted to make a difference. I wanted to save the
world. I think there are still a lot of students who come into our program who feel the same way.”

A recent @politico article discusses #farmers and #food companies' responses to a #climate bill in the Senate. Paig… https://t.co/ZNzc40sOal