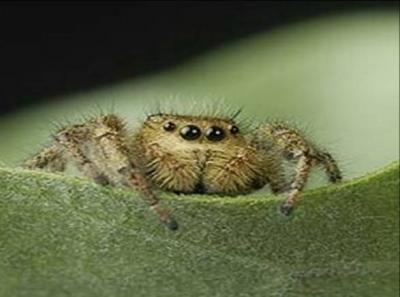 If you thought women's pro wrestling was a cutthroat business, jumping spiders may have them beat.

In most animals the bigger, better fighter usually wins. But a new study of the jumping spider Phidippus clarus suggests that size and skill aren't everything — what matters for Phidippus females is how badly they want to win.

Found in fields throughout North America, nickel-sized Phidippus clarus is a feisty spider prone to picking fights. In battles between males, the bigger, heavier spider usually wins. Males perform an elaborate dance before doing battle to size up the competition. "They push each other back and forth like sumo wrestlers," said lead author Damian Elias of the University of California at Berkeley.

This fancy footwork allows males to gauge how closely matched they are before escalating into a full-blown fight. "Males rarely get to the point where they solve things by fighting," said co-author Carlos Botero of the National Evolutionary Synthesis Center in Durham, NC. "Before the actual fight there's a lot of displaying. This allows them to resolve things without injuring themselves."

But when the researchers watched female fights, they found that females fight by different rules. They skip the preliminaries and go straight for the kill. "Males have a more gentlemanly form of combat, whereas in females it's an all-out fight," said Elias. "At the drop of a hat they start bashing and biting each other."

And unlike male combat, female feuds were often fatal. "They don't give up, even when their opponent is beating them to a pulp," said Botero. "They keep going until one of them is dead, or severely injured."

The researchers were unable to predict which female would win based on size or strength. "Nothing we could measure predicted which one would come out on top. That was really unexpected," said Elias.

At first, the researchers wondered if victory went not to the bigger fighter, but to the owner of the battlefield. "In a lot of animals one of the things that determines whether they win a fight is whether they're on their own territory," Elias said.

Phidippus clarus spiders live in nests they build from silk and rolled up leaves. While males are nomads, wandering from nest to nest in search of mates, females generally stick to one nest and guard it against intruders.

To test the idea that in turf wars the rightful owner typically wins, the researchers set up a series of fights between resident and intruder females. But when they put pairs of females in an arena – one with a nest, and one that was homeless – the head of the household wasn't always the winner. Instead, the female most likely to win was the one closer to reproductive age.

"The ones that were closer to maturation fought harder," said Botero. "They were more motivated and valued the nest more strongly."

Before a spider is ready to reproduce, she must first shed her hard outer skin and grow to adult size through a process known as molting. "They're very vulnerable to predators at that time," said Elias. "If they're really close to molting and they don't have a nest at that moment, they're unlikely to survive."

Females need the safety of their nests to molt, mate, and rear their young. "Finding a good nest becomes more critical the closer they are to maturing," said Elias.

"In female fights it's not how big or heavy they are, but how badly they want it," he added. "That trumps size and weight and whether it's her territory. They fight until they have nothing left."

The team's findings were published online in the June 4 issue of Behavioral Ecology.

In our fall issue of Breakthroughs magazine, read about the #30x30 conservation initiative, our new Climate Equity… https://t.co/0GuymlEoMT