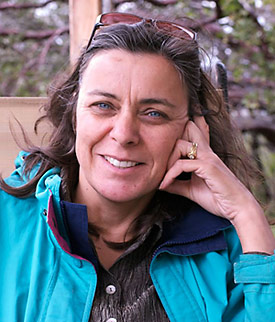 Jillian Banfield, a University of California, Berkeley, biogeochemist and geomicrobiologist, will receive two prestigious awards — the Benjamin Franklin Medal in Earth and Environmental Science and the L-Oréal-UNESCO "For Women in Science" award — for her groundbreaking work on how microbes alter rocks and interact with the natural world.

The awards were announced today (Tuesday, Nov. 9) in Philadelphia and New York, respectively.

Banfield, who came to UC Berkeley in 2001 after 11 years on the faculty of the University of Wisconsin, Madison, is a professor of earth and planetary science, of environmental science, policy and management, and of materials science and engineering, and a faculty scientist at Lawrence Berkeley National Laboratory.

Banfield is one of seven recipients of the 2011 Franklin Medal, presented every year by the Franklin Institute in Philadelphia to "preeminent trailblazers in science, business and technology," according to the institute's press release. Her co-winners include Dean Kamen, inventor of the Segway, and George Church, a Harvard University genetics researcher who promotes personal genomics and synthetic biology.

Banfield is one of five women scientists from five continents to receive the 2011 Women in Science awards for "the contributions of their research, the strength of their commitments and their impact on society," according to a press release issued by the L'Oréal Foundation and UNESCO (United Nations Educational, Scientific and Cultural Organization). She is the North American laureate; other laureates are a chemist from Kuwait University in Safat, an astronomer from Mexico City University (UNAM), a physicist from Lund University in Sweden, and a professor of chemistry and energy from Hong Kong University.

The awards ceremony will take place on March 3, 2011, at UNESCO headquarters in Paris. Each laureate will receive $100,000 in recognition of her contributions to science.

Banfield, a native of Australia who received her Ph.D. from Johns Hopkins University in 1990, studies the interactions among microbes in extreme physical environments, such as highly acidic mines in California that have been declared Superfund hazard sites. She has shown how such microbes have adapted to these extreme conditions, using metal sulfide ores as sources of energy. She and her students also have used cutting-edge techniques to sequence the genomes of the different species of bacteria and primitive microbes called Archaea within this community and to catalogue the proteins they produce, fully characterizing this unique microbial ecosystem.

Her work has improved the understanding of how life survives in even the most unlikely places, and could assist humans in finding the signature of life on other planets.

Throughout her career, Banfield said, she has looked for interconnections — both close up, at the microscopic level, and in the big picture — that sculpt the natural world.

“Microorganisms shape our biogeochemical cycles and impact our health. However, microorganisms function as parts of communities and impact — and are impacted by — their physical and chemical surroundings," she said. "So, understanding their effects requires consideration of the whole ecosystem.”

For her research, Banfield has been named a MacArthur "genius" fellow, a fellow of the National Academy of Sciences and an elected fellow of the American Academy of Microbiology and The Geochemical Society.

“In the past, many women entering science expected to not have families or gave up their careers to have them. In the span of my career, the place of women in science has expanded greatly,” she said. “Now, due to societal shifts and policy changes, if she desires, a woman can expect to have both a career and a family.”

“There is still significant male dominance in many fields of science, especially the physical sciences. I think the ‘cause’ of women in science is to have equal opportunity to succeed, and of course this has been — and continues to be — worth fighting for,” Banfield said.

This cause represents an invaluable contribution by women scientists to finding sustainable solutions for today’s society, she added.

“It seems clear to me from personal experience that women approach problems and handle situations differently from men," she said. "I suspect that women tend to see things more holistically and be less forceful in the ways in which they offer opinions.”

Information and photos are on the Web at http://www2.fi.edu/press/awards and at http://www.loreal.com/_en/_ww/index.aspx


Read the story at the source