Homoplasy is A good thread to pull to understand the evolutionary ball of yarn.

Similarity can arise in two species for a number of reasons; studying these can lead to a fuller and more profound understanding of the processes underlying genetic, developmental and evolutionary interrelatedness. 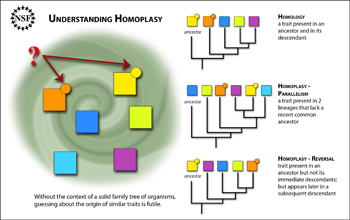 Innovative research at UC Berkeley to better understand the patterns and processes of evolution is featured in the issue of Science coming out February 25, 2011.

A review paper by David Wake, Marvalee Wake and Chelsea Specht suggests that looking for cases of similarity ("homoplasy" = evolutionary convergence or reversal) can tease apart the frustrating morass of overwhelming data and information when it comes to evolutionary research. Instead of looking at organisms that are related, these scientists instead focus on situations where a derived trait surfaces in two lineages that lack a recent common ancestor. Or, in another approach, where an ancestral trait was lost but then came back several generations down the road.

Zeroing in on these situations may help determine the process and mechanism of evolution.

“We are really interested not in just similarities, but where similarity appears and reappears in multiple places across the evolutionary tree,” Specht said. “That becomes a focal point for our studies, and may tell us something about an organism's ability to change and adapt to environmental pressures.”

“We know very little about how evolution works and what genetic and genomic constraints may influence evolutionary pathways. We have this assumption that evolution happens along the lines of parsimony, the simplest way possible,” Specht said, but that’s not always the case.

The authors give plenty of fascinating real-life examples, such as species of salamanders who, through convergent evolution have grown longer in body-length as their vertebrae increased in size. Another example given was how petals in flowers may have evolved on six separate occasions in different plants. A striking example of genetically passed-down traits is the identical genetic code that any organism with eyes must have and shares (from invertebrates to mammals).

It is these stories of genetic and developmental biology that help us get to the core of the issue, and to elucidate relationships between organisms, as well as to show a remarkable picture of their evolutionary history.

Read it at the Source