Students in Professor Miguel Altieri’s Urban Agriculture class showed off their class-community partnership this Saturday (Oct. 27) at an “Open Field Day” event for students and affiliated community members, touring verdant, bountiful gardens where empty lots, many laden with trash and toxic materials, once sat. The students established food gardens in various homes and schools in the City of Berkeley as part of their fall semester requirements. 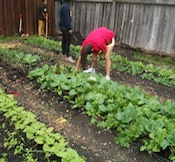 Altieri, a professor in the Department of Environmental Science, Policy and Management, retooled the class (ESPM 117) this semester to involve students in teaching low-income people how to grow food and thus improve their food security and nutrition, as well as to expose students to the practical processes and positive social outcomes of advancing urban agriculture.

“These gardens serve as ‘lighthouses’ for neighbors, parents and other community members,” says Altieri. “If people see first-hand the positive changes from graffiti and garbage to fresh food, they are more likely to build and maintain food gardens themselves.” The class examines the ways urban agriculture can “aid in the enhancement of food security, biodiversity, energy conservation, job creation, and human health and well-being,” Altieri says.

Students organized this “Open Field Day” tour to give affiliated and nearby community members an opportunity to learn about the benefits of using urban land to grow food crops. The event featured just some of the projects created by students in the class in partnership with community members.

The tour launched with an introduction at the student organic garden at the Oxford Tract, a College of Natural Resources agricultural research area located at Virginia and Walnut streets. The next stop was two residential garden projects on Sacramento Street, where the students had conducted soil testing, a clean up of accumulated garbage from previous tenants, and a toxic-waste clean up of lead, batteries, oil, and antifreeze.

“Now two organic gardens will produce five kilograms of vegetables per square meter per year," Altieri says. “If such gardens were scaled up in similar areas in Southwest Berkeley and West Oakland, more than a million tons of vegetable crops could be produced per year, thus significantly contributing to solving food insecurity and nutrition-related problems confronting low-income people in the Bay Area.”

The tour also included a school garden at Aspire California College Preparatory Academy on Jefferson Avenue, 70 percent of whose students receive free or reduced lunch, and a garden at the Haste St. home of Rene Zazueta, featuring demonstrations of compost tea, a solar oven, rain water harvesting and other projects that marry the issues of energy and food sovereignty.