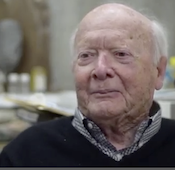 How plants use carbon dioxide is at the heart of biology, but it wasn’t until Andrew Benson ’39 got together with Melvin Calvin, a UC Berkeley chemistry professor, in the years following World War II, that the process was elucidated. A new video, titled "A Conversation with Andrew Benson: Reflections on the Discovery of the Calvin-Benson Cycle," captures Benson's perspective on this collaboration.

Ernest Lawrence, director of what became the Lawrence Berkeley National Laboratory, saw the research potential of carbon-14, a radioactive isotope that became available after the war, and encouraged Calvin to apply it to photosynthesis. Calvin, in turn, hired Benson, who is now an emeritus professor at the Scripps Institution of Oceanography in La Jolla, California. Benson brought expertise in organic chemistry–specifically in carbohydrate chemistry–along with research experience with photosynthesis and carbon-14.

The pair conducted seminal work on the problem from 1946 to 1954, and, together with many collaborators, revealed how CO2 functions in plants, thus answering a centuries-old question that opened the door to a new realm of advances in biology and chemistry. Specifically, they identified the series of reactions by which plants use CO2 in photosynthesis. The pathway is called the Calvin-Benson Cycle. In 1961, Calvin was awarded the Nobel Prize in Chemistry.

Bob Buchanan, a UC Berkeley professor of plant and microbial biology, videotaped an interview with Benson to record his story for posterity. “I think students will be very interested to hear Benson describe the process by which he and Calvin developed the science and made their discoveries,” Buchanan said. “There was also controversy over the Nobel not being shared given Benson’s critical photosynthesis work, and this video puts Benson’s perspective on that matter, an admirable one, I think, in the historical record.” The interview is also a revealing portrait of what it was like to work in Berkeley’s Old Radiation Laboratory, in an era when radioactive materials were novel and safety procedures were less developed.

The video and transcript are now live on You Tube. The Bancroft Library on campus will house the video’s transcript in its oral histories collection, and the video will be housed in its motion picture collection.