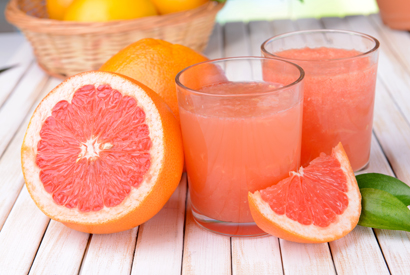 If these findings sound somewhat familiar, it may be because the link between grapefruit juice and weight loss – or just decreased weight gain – has been touted before in Hollywood diets. However, the earlier studies behind those claims were often small, not well-controlled and contradictory, according to Andreas Stahl and Joseph Napoli, the two UC Berkeley faculty members who led the new research.

This latest work was funded by the California Grapefruit Growers Cooperative, but the UC Berkeley researchers emphasized that the funders had no control or influence over the study design or research findings. Both Stahl and Napoli said they went into this research with some skepticism.

“I was surprised by the findings,” said Stahl, associate professor of nutritional sciences and toxicology. “We even re-checked the calibration of our glucose sensors, and we got the same results over and over again.”

Napolli added that “we see all sorts of scams about nutrition. But these results, based on controlled experiments, warrant further study of the potential health-promoting properties of grapefruit juice.”

The study authors randomly divided mice into six groups, including a control group that drank only water. Those drinking grapefruit juice got a mixture diluted with water at different concentrations, and sweetened slightly with saccharin to counteract grapefruit’s bitterness. The researchers also added glucose and artificial sweeteners to the control group’s water so that it would match the calorie and saccharin content of the grapefruit juice.

At the end of the study period, the mice that ate the high-fat diet and drank diluted grapefruit juice not only gained less weight than their control counterparts, they also had a 13 to 17 percent decrease in blood glucose levels and a threefold decrease in insulin levels, which reveals greater sensitivity to insulin. (In Type 2 diabetes, the pancreas makes extra insulin to compensate for increased resistance to the hormone.)

The researchers gave one group of mice naringin, a bioactive compound in grapefruit juice that has been identified as a key agent in weight loss, and another group metformin, a glucose-lowering drug often prescribed for those with Type 2 diabetes.

The mice were fed a diet that was either 60 percent fat or 10 percent fat for 100 days, and their metabolic health was monitored throughout the study.

“The grapefruit juice lowered blood glucose to the same degree as metformin,” said Napoli, professor and chair of nutritional sciences and toxicology. “That means a natural fruit drink lowered glucose levels as effectively as a prescription drug.”

The group of high-fat-diet mice that received naringin had lower blood glucose levels than the control group, but there was no effect on weight, suggesting that some other ingredient in grapefruit juice is also beneficial.

“There are many active compounds in grapefruit juice, and we don’t always understand how all those compounds work,” said Stahl.

The study did not find as big an impact on mice that ate a low-fat diet. Those that drank the grapefruit juice saw a two-fold decrease in insulin levels, but there was no significant change in weight or other metabolic variables.

“The effects were more subtle for the low-fat diet group,” explained Stahl. “Mice are incredibly healthy animals with naturally low levels of bad cholesterol. So if they are eating a healthy, low-fat diet, it will take more to see a significant effect on their health.”

The researchers said they ruled out the typical explanations for weight loss in their study. It wasn’t the amount of food consumed, since the ingested calories among the different groups were about the same. The level of activity and body temperatures were comparable, and the authors even checked the calories eliminated in the feces of the mice to check for problems with the body’s absorption of nutrients.

“Basically, we couldn’t see a smoking gun that could explain why or how grapefruit juice affects weight gain,” said Stahl.

The researchers said they hope to continue the investigation into grapefruit juice. “Obesity and insulin resistance are such huge problems in our society, ” said Stahl. “These data provide impetus to carry out more studies.”

Read the complete story at the source.