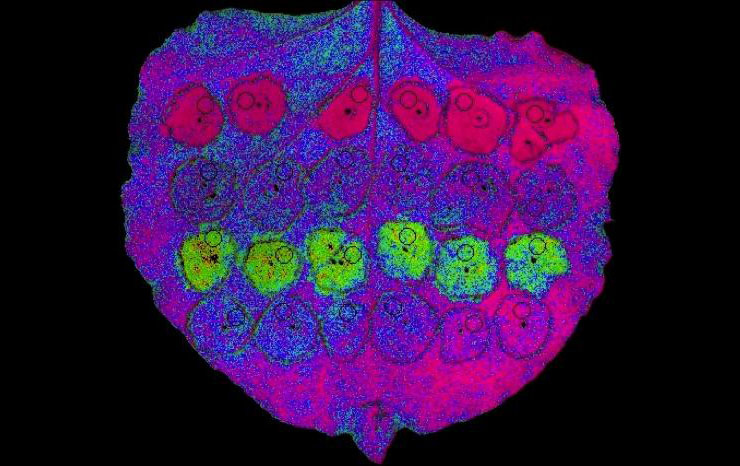 Different genes are expressed side-by-side on a leaf through transient expression, a technique that is now being used to compare changes to photosynthesis and identify ways to increase crop yields. Image courtesy of Krishna Niyogi.

Photosynthesis is the process in which plants turn light energy and carbon dioxide into food and fuel. In full sun, plants receive more energy than they can use. The extra energy could generate damaging molecules, but instead, plants siphon this energy off as heat to protect themselves. When a cloud passes overhead, plants are slow to recover from this protective process, which is called non-photochemical quenching, or NPQ.

In a recent study, researchers used a rapid screening technique that genetically engineers plants--in real time--to investigate how to help plants realize their full potential during this process.

"It can take minutes to hours for the plant to fully recover and begin photosynthesizing at maximum capacity again," said Krishna Niyogi, a professor in the department of plant and microbial biology (PMB) and one of the authors of the study. "We are trying to figure out how to speed up the plant's recovery from NPQ, which models predict could increase yields by 10 to 15 percent."

Niyogi and co-authors are searching for mechanisms that plants and algae naturally evolved to recover faster from NPQ. Their study was published in Plant Journal and is part of Realizing Increased Photosynthetic Efficiency(RIPE), a multi-institutional research project funded by the Bill & Melinda Gates Foundation and led by the University of Illinois at the Carl R. Woese Institute for Genomic Biology.

Before implementing this technique, researchers could quickly sequence the DNA of these organisms, but lacked the biological tools to quickly figure out the genes responsible for desirable traits. They would have had to spend weeks or months creating gene constructs, inserting them into plants, growing the plants, and ensuring that the gene had been expressed.

Now, in a matter of days, they can compare multiple genes side-by-side on the same leaf using transient expression, a temporary technique to evaluate gene function used extensively by plant pathologists. With transient expression, the gene is expressed for a few days and then the effect on the leaf is tested.

Researchers swap out the genes from a bacterium that, in nature, produce tumorous growths on the roots of flowering plants with the genes that might speed recovery from NPQ.

NPQ is incredibly complex. At least four different mechanisms, with different rates of recovery, collectively make up NPQ. The fastest mechanism is mediated by a tug-of-war between two enzymes.

In this study, researchers evaluated how overexpressing these enzymes affected NPQ. They also evaluated three distantly related proteins (from a unicellular alga, a moss, and a small flowering plant) that are thought to activate the fastest mechanism; they found that the protein from the moss had the fastest activation and greatest capacity to recover from NPQ.

Finally, they confirmed the function of genes from two species of oceanic algae, which are emerging model organisms. One of these genes enabled the plant to produce a pigment that has been shown to improve energy transfer.

Ultimately, this technique speeds up the research process. Now researchers can use this technique to quickly identify the genes needed to increase the yields of staple food crops. Through "global access," pledged by the Bill & Melinda Gates Foundation, the outcome of this work may one day benefit smallholder farmers, especially those working to sustain their communities in Sub-Saharan Africa and Southeastern Asia.

Lauriebeth Leonelli (PMB) was lead author of the study, and other co-authors include PMB's Erika Erickson and Dagmar Lyska.

Read this story at the source.