As biotic communities form, pollinators swap one plant for another

In the crops and orchards of California’s Central Valley, even the tiniest species can have a big impact. Consider wild bees: these pollinators visit a variety of native plants and agricultural fields, providing an essential role in cultivating our food crops.

A new study from UC Berkeley researchers helps create a clearer understanding of how networks of plants and pollinators form over time to create biotic communities. The results of their research, which could help scientists and conservationists rebuild communities when a species goes locally extinct, are published today in Ecology Letters. 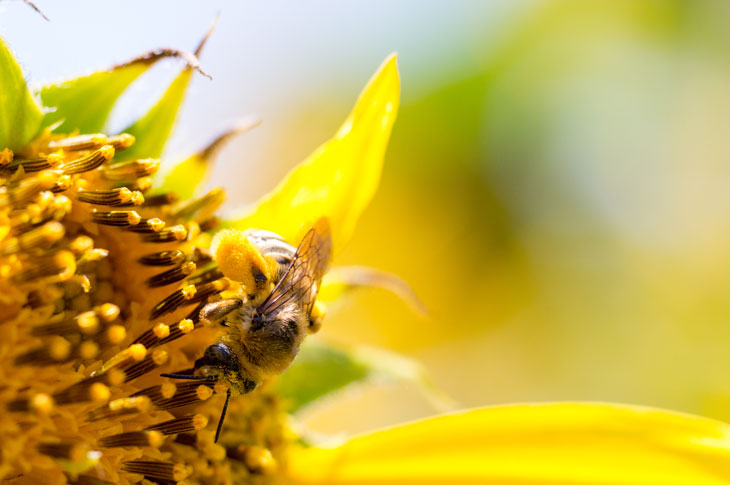 Insect pollinators such as butterflies, bees, and hoverflies are important “ecosystem service providers,” according to Lauren Ponisio, who earned her PhD  in 2016 from the Department of Environmental Science, Policy, and Management (ESPM). Many of the foods we eat—almonds, blueberries, tomatoes, and more—depend on insect pollination for reproduction.

“Human activities are degrading our ecosystems at an alarming rate, and we want to know how to restore them,” said Ponisio, who was a postdoctoral fellow in ESPM before recently joining UC Riverside as an assistant professor. “If we understand how communities of pollinators and plants form, we might be able to reassemble communities of locally extinct species in the future.”

Ponisio, along with ESPM professor Claire Kremen and UC Riverside postdoctoral fellow Marilia Gaiarsa, tracked the number of times that common Central Valley pollinators such as wild bees and hoverflies visited selected areas of native plant growth. By studying how often pollinators visited plants, they hoped to better understand how these species assemble to make up the communities of plants, insects, and animals that form the biotic communities in and around food crops. 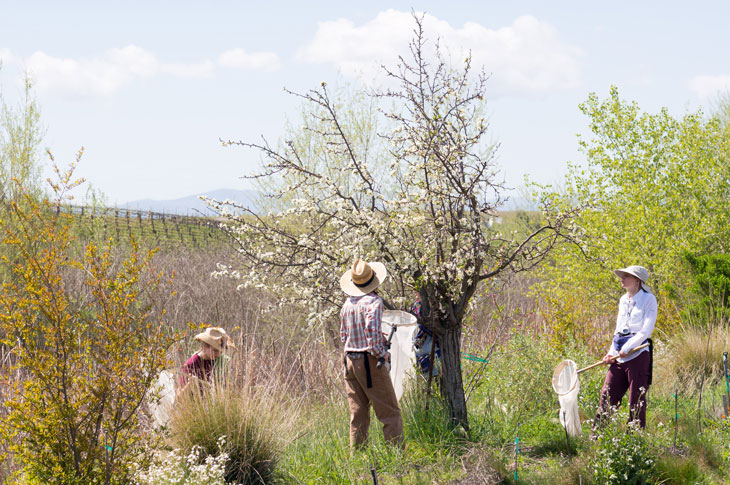 More than 100 field technicians, undergraduate and graduate students, and volunteers worked alongside lab managers and postdoctoral researchers to collect the data that culminated in this study. Photo by Leithen M'Gonigle.

To track the interactions between pollinators and plants, researchers gathered eight years of data that resulted in nearly 20,000 pollinator visitation records. The study was made possible by research that began in Kremen’s lab in 2006. In cooperation with local farmers, Kremen’s team planted hedgerows of native plants in five fields that are home to intensely managed agricultural plots.

Researchers then visited the hedgerows—borders of plants that surround fields—between two and five times each year. During each visit, researchers from Kremen’s lab used nets to capture bees and hoverflies that visited the newly planted hedgerows. More than 100 field technicians, undergraduate and graduate students and volunteers worked alongside lab managers and postdoctoral researchers to collect the data that culminated in this study, as well as many other ecology papers. Kremen’s team followed the same schedule to collect samples from two control locations: a group of older established hedgerows, as well as the overgrown borders of crops that were not replanted with native species.

Over the course of the 8-year study, researchers in Kremen’s lab spent more than 500 hours catching pollinator species. Once Ponisio analyzed the data, she discovered that pollinators’ visitation patterns are different from how ecologists have previously described plant-pollinator relationships. Using a statistical model to chart changes in the type of plant species that pollinators during the eight years, Ponisio and her co-authors found that pollinators’ preferences morph as communities of plants grow. This is known as opportunistic attachment: pollinators shift their preference for a particular plant species over time as different plants become available or go locally extinct.

According to Kremen, this finding is a new development in how ecologists understand biotic community assembly. “Our study shows for the first time that the most persistent and abundant pollinator species often opportunistically change their plant partners as the plant community itself changes in response to restoration,” she said. 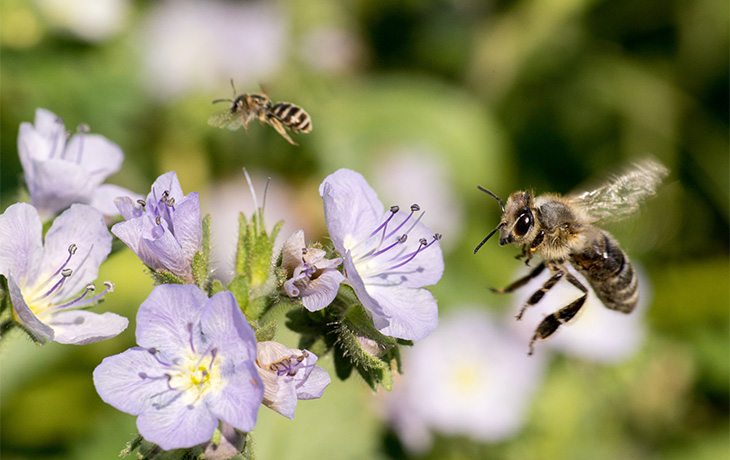 This study's findings could help scientists and conservationists address how to rebuild plant and animal habitats when a species goes locally extinct. Photo by Leithen M'Gonigle

In an effort to make her results transparent and repeatable, Ponisio has published the computer code she used to create the study’s statistical models on the development platform GitHub. “To reproduce this computationally intensive study, you need a lot of code. I want others to have access to this code so they can evaluate the results for themselves,” she said.

These findings will continue to be valuable as scientists and conservationists address how to rebuild plant and animal habitats. “This study demonstrates that pollinators may be malleable in terms of which plants that they visit and that dynamic shifts are part of the assembling process for a community,”  said Ponisio. This could mean that scientists might find ways to maintain and rebuild community functionality even when a plant species goes locally extinct.

RT @UCBerkeley: Why some countries are leading the shift to green energy

“By improving class structure and instructor practices, we have an ability to multiply our impact on all of the stu… https://t.co/f4so0nfJP4

RT @ClimateWildfire: We’re eager to introduce founding CWI board member, Lara Kueppers. Lara is a professor in the Energy and Resources gro…

New analysis by @AreBerkeley faculty, graduate students, and alumni estimates that current uses of the California I… https://t.co/YH08zW1ynX

RT @Areidy92: Honored to have our work featured in an @AGU_Eos research spotlight. Thank you Dr. @AmirAghaKouchak for the nomination!
@Ear…