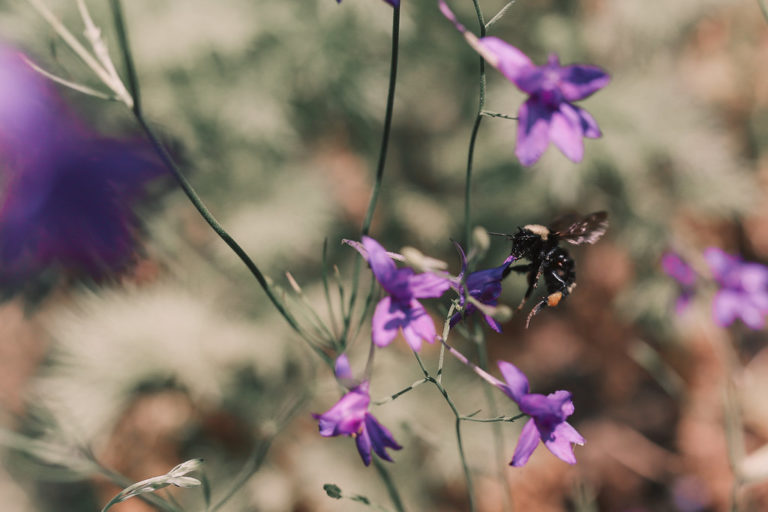 Muller Ranch is full of native pollinators, such as this bumble bee. Images from BFI

“If honey bees disappeared tomorrow, we would definitely be compelled to change our farming system. We’d have to provide for the needs of native pollinators.” That’s Claire Kremen, a professor in the Department of Environmental Science, Policy, and Management, and a conservation biologist who studies biodiversity loss. Kremen was recently interviewed about California’s native pollinators on an episode of Just Food, a new podcast series from the Berkeley Food Institute (BFI).

Just Food is a six-part podcast series that investigates food justice and health in California. Produced in partnership with UC Berkeley’s Advanced Media Institute, the series’ first episode focused on efforts to promote equitable agriculture, and included an interview with Christy Getz, an associate Cooperative Extension specialist. Getz, who has been studying an organization called the Equitable Food Initiative (EFI), spoke about the challenges that many workers in agriculture face: “Farmworkers suffer from high rates of food insecurity so that’s kind of the paradox, that the very people who pick and harvest our food often can’t afford to eat that very food.” Efforts like the EFI aim to make farming healthier for workers and the environment through improving working conditions and farming habitats.

The podcast’s second episode, “Feeling the Sting: What Can Be Done to Protect Pollinators” featured Kremen as well as a local farmer and a beekeeper. Kremen addressed American agriculture’s reliance on honey bees—which aren’t native to the US—to pollinate crops. This has created a fragile ecosystem, according to Kremen: “Anytime you rely on only one thing, you have no buffer. It's kind of like the stock market—most people recognize that investing all of their assets into a single commodity is not a wise idea.”

To create more robust farming ecosystems, and to protect against disorders like colony collapse, Kremen calls for relying on a greater diversity of pollinators, including native pollinators. Additionally, farms need to create habitats in which native pollinators like green sweat bees can thrive. For many farms that focus on monoculture growing, this means incorporating natural plants and diversifying crops to include plants that bloom at different times of the year, providing food for native pollinators year round.

The podcast series will continue to tackle food justice and health issues in its upcoming episodes. Read more about the podcast and listen to episodes on BFI’s website.

RT @CalChinaClimate: Join us and @Nature_Climate in a virtual dialogue with women leaders as the share their perspectives on the importance…

Join @ScienceAtCal on Thurs, Oct 21 for a discussion on climate change and its effects on landscape with Kerri John… https://t.co/BbjKkll4A3