The first comprehensive budget analysis of the protected areas in Africa where lions live shows that the vast majority – about 90 percent — are significantly underfunded. The study, which examined 282 national parks and reserves across 23 African countries, showed that an investment of at least $1 billion dollars annually is needed to manage these areas. Current support totals $381 million. 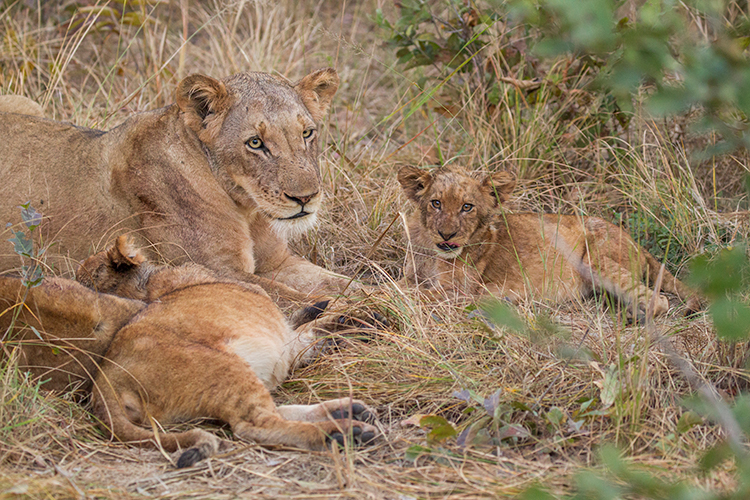 A lioness and her cubs in Zambia. (Photo by Sebastian Kenner Knecht)

Lion conservation is at a tipping point, said lead co-author Jennie Miller, a postdoctoral researcher in UC Berkeley’s College of Natural Resources. After dropping 43 percent over the past two decades – to about 20,000 – the populations of these big cats are in decline, but could still bounce back with proper protections.

“Lions are really at a significant place in their survival.” Miller said. “If we can invest resources in them today, we’ll be able to save them, but if we don’t, it is very possible that they will decline much more significantly and possibly go extinct.”

A 2017 study led by the wild cat conservation organization Panthera showed that Africa’s protected areas could support as many as 83,000 lions if properly managed. Funding is needed to pay for staff, vehicles, and other resources that can help combat poachers and prevent land degradation.

“When lions are given the resources they need, they do quite well,” Miller said. “Protecting them is largely a matter of providing a relatively pristine environment where they have a lot of prey.”

Protecting wild areas benefits not only lions, but also a wide variety of other species who make these lands their homes, said Justin Brashares, a professor of environmental science, policy and management at UC Berkeley who was not involved in the study.

“The areas in that data set are some of the richest and most diverse ecosystems on our planet,” Brashares said. “These protections could ensure the maintenance of some of the most diverse bird communities in the world, a variety of butterflies and certainly all the other carnivores, large and small.”

“A world without lions is unthinkable,” Miller said. “A world without clean water and nutrient-rich soil is even worse. These issues are interconnected, and point back to conserving protected areas so these natural spaces can foster abundant wildlife and the ecosystem services that support healthy people.”

The findings were published this week in the journal Proceedings of the National Academy of Science (PNAS). The study was led by Panthera, with contributions from colleagues in organizations such as Oxford University’s WildCRU, African Wildlife Foundation and Wildlife Conservation Society, and from representatives of the wildlife authorities of Botswana, Kenya and Zimbabwe.