The Central Valley’s heavy wintertime tule fog – known for snarling traffic and closing schools — has been on the decline over the past 30 years, and falling levels of air pollution are the cause, says a new study by scientists at the University of California, Berkeley.

Tule fog, named for a sedge grass that populates California’s wetlands, is a thick ground fog that periodically blankets the Central Valley during the winter months.

To find out why the fog is fading, the researchers analyzed meteorological and air pollution data from the Central Valley reaching back to 1930. They found that while yearly fluctuations in fog frequency could be explained by changes in annual weather patterns, the long-term trends matched those of pollutants in the air. 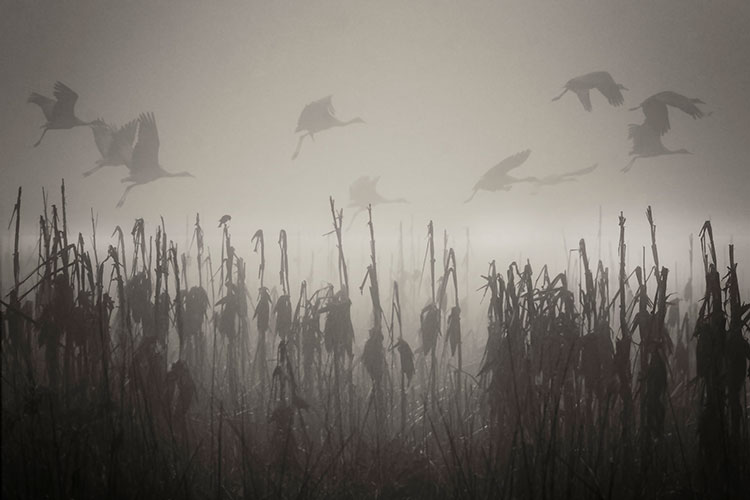 Cranes glide through the tule fog at the Merced National Wildlife Refuge. (Photo by Steve Corey via Flickr)

The results help explain the puzzling decades-long rise and fall in the number of “fog days” affecting the region, which increased 85 percent between 1930 to 1970 and then decreased 76 percent between 1980 to 2016. This up-and-down pattern follows trends in air pollution in the valley, which rose during the first half of the century, when the region was increasingly farmed and industrialized, and then dropped off after the enactment of air pollution regulations in the 1970s.

“That increase and then decrease in fog frequency can’t be explained by the rising temperatures due to climate change that we’ve seen in recent decades, and that’s what really motivated our interest in looking at trends in air pollution,” said Ellyn Gray, a graduate student in environmental science, policy and management at UC Berkeley and first author on the paper, which appears online in The Journal of Geophysical Research: Atmospheres. “When we looked at the long-term trends, we found a strong correlation between the trend in fog frequency and the trend in air pollutant emissions.”

“We have a lot more fog in the southern part of the valley, which is also where we have the highest air pollution concentrations,” Gray said. 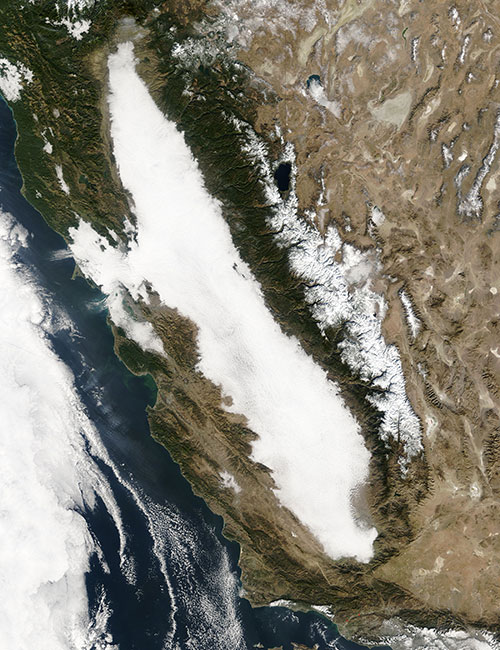 And it makes sense, given what we know about how clouds and fog form, Gray says. Oxides of nitrogen (NOx) react with ammonia to form ammonium nitrate particles, which help trigger water vapor to condense into small fog droplets. Emissions of NOx have declined dramatically since the 1980s, resulting in a decrease in ammonium nitrate aerosols and fog.

“In order to get fog to form, not only do you need the temperature to go down, but there has to be some sort of seed for water to condense around, similar to how you would have a cloud seed in the atmosphere,” Gray said. “Ammonium nitrate happens to make very good fog seeds — water is very attracted to it.”

As a next step, the team plans to take a close look at the association between air pollution, tule fog and traffic safety in the valley.

“When I was growing up in California in the 1970s and early 1980s, tule fog was a major story that we would hear about on the nightly news,” said Allen Goldstein, a professor in the Department of Environmental Science, Policy, and Management, and in the Department of Civil and Environmental Engineering at UC Berkeley and senior author on the paper. “These tule fogs were associated with very damaging multi-vehicle accidents on freeways in the Central Valley resulting from the low visibility. Today, those kind of fog events and associated major accidents are comparatively rare.”

Co-authors of the paper include S. Gilardoni and Maria Cristina Facchini of the Institute of Atmospheric Sciences and Climate in Italy; Dennis Baldocchi of UC Berkeley, and Brian C. McDonald of the University of Colorado, Boulder, and the NOAA Earth System Research Laboratory in Boulder.

This research was supported by a National Science Foundation (NSF) Graduate Fellowship, the California Agricultural Experiment Station and McIntire-Stennis Cooperative Forestry Program of the U.S. Department of Agriculture, and the National Research Council of Italy.

For the latest issue of @GianniniFnd's ARE Update, @AreBerkeley Professor Maximilian @auffhammer examines how a new… https://t.co/E085RNoSqP