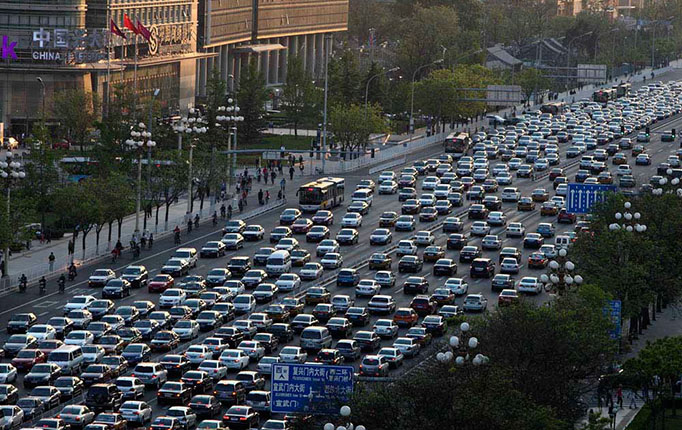 In large cities across China, traffic congestion and air pollution have risen dramatically over the past two decades. Image via Wikimedia Commons.

According to the World Health Organization (WHO), global obesity rates have almost tripled since 1975. In 2016, more than 1.9 billion adults were overweight and 650 million were clinically obese. To better understand this phenomenon, researchers are exploring how shifting transportation landscapes could play a role.

In a new paper published in the British Medical Journal (BMJ) today, Michael Anderson, associate professor in the Department of Agricultural and Resource Economics (ARE), found substantial evidence that vehicle ownership in Beijing appears to lead to weight gain and long-term declines in physical activity.

By analyzing a vehicle permit lottery in Beijing, Anderson and his colleagues concluded that “continuing surges in car usage and ownership in developing and middle income countries may adversely affect physical health and obesity rates.”

In China, vehicle ownership has spiked dramatically in recent years—it nearly doubled from 2008 to 2010, according to the World Resources Institute. The Chinese government has taken action to curb air pollution and traffic congestion in the most populous cities, using policy and market-based strategies of “transport demand management.” In January 2011, Beijing began a randomized vehicle lottery, which capped the dispersal of automobile permits at 240,000 annually. By the following year, about 1 million Beijing residents had entered the lottery.

Speaking with Fangwen Lu, a former ARE graduate student in China, Anderson learned about the Beijing lottery and saw a rare research opportunity. Previous observational studies related to car ownership have relied on subjects opting into vehicle ownership, whereas the Beijing lottery assigned car ownership randomly. “The randomization of the lottery is what gives us confidence—we know that the winners should be comparable to the losers on all attributes other than car ownership,” says Anderson.

The study, titled “Physical activity and weight following car ownership in Beijing, China,” was conducted in collaboration with two colleagues at Renmin University of China and Beijing Smart Transit Tech Co, Ltd. Using sampling data from the Beijing Transportation Research Center, Anderson and his team analyzed 937 individuals. Of these, 180 people were awarded vehicle permits and about 91 percent of those winners bought cars.

The research team found that within five years of winning, adults of all ages took approximately three fewer rides on public transit each week, with reductions in daily walking and bicycling of about 24 minutes. Meanwhile, weight gain among lottery winners under 50-years-old was insignificant, but in those over 50 or over, it was nearly 23 lbs higher than among losers over the same timeframe.

Anderson says that higher weight gain among older participants isn’t really surprising, since physical activity declines with age. So, he says, eliminating active transport from one’s daily activities could have a larger impact for an older population. Anderson adds  that other questions remain unanswered and require further study. For example, the study hasn’t established whether new car owners won’t replace declines in walking or cycling with other physical activity, such as gym visits.

On their face, the results might seem intuitive. But Anderson’s research provides important empirical data in a field rife with observational studies. Thanks to the randomization of the lottery, many other factors—such as household size, employment, age, gender, education level, household income, or marital status—can be discounted as potential explanations for the health outcomes in the study.

Overall, affluence seems to be one clear predictor for both weight gain and declines in physical activity. In countries like China, which have  a rapidly growing middle class, weight trends increasingly mirror the rates in more highly developed countries like the United States.

“Obesity levels vary, and the U.S. is an outlier because of its high obesity rates,” says Anderson. “But I think the trends are somewhat similar in China. Certainly amongst middle income and above, you’re generally not likely going to find obesity declining rather than increasing.”

Though still less prevalent than in the U.S., unhealthy weight gain in China has spiked in the past ten years. In Beijing, a full quarter of adults are obese.

Anderson specializes in the complex relationships between economics and transportation, the environment, and health. He says that, in addition to traffic congestion and weight gain, booming car ownership in China further exacerbates already high air pollution. The WHO estimates that air pollution kills about 7 million people worldwide annually, contributing significantly to lung cancer, cardiovascular disease, chronic obstructive pulmonary disease, and other serious ailments.

Whether to combat air pollution or traffic congestion, transport demand management schemes have taken shape in the U.S. and other countries in recent years. New York City adopted a pay-to-drive plan that would tax drivers in congested areas—such taxes exist in such cities as London, Singapore, and Stockholm. In San Francisco, officials recently approved a plan to prohibit private vehicles on Market Street, a main thoroughfare, and Seattle’s mayor has pushed for roadway tolls to reduce congestion and emissions.

Anderson’s study suggests that clear gains could be made with transport demand management. “The public-health impacts of automobile travel are really important,” he says. “While cars have saved trillions of hours of travel time globally, they’ve also likely shortened lifespans by trillions of hours in aggregate via traffic accidents, pollution, and obesity-related disease.”

Join Dr. Steve Ruzin, director of the Biological Imaging Facility, to learn about the incomparable biodiversity of… https://t.co/bcN6ZBsT7d

Can scientists catch #COVID-19 across large populations? COVID-WEB, an initiative to detect the virus in #BayArea… https://t.co/TSxGqMqQcT