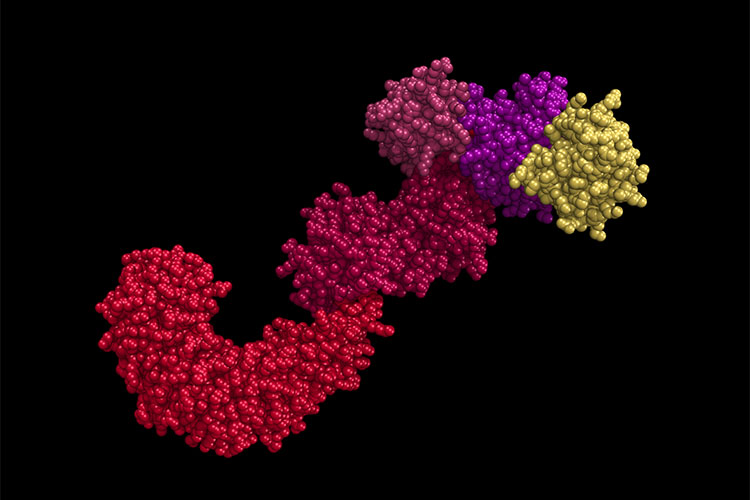 The NLRP3 receptor protein is responsible for detecting potential pathogens in the body and launching an immune response. (Image by MLGProGamer123 via Wikimedia Commons)

Chronic inflammation, which results when old age, stress or environmental toxins keep the body’s immune system in overdrive, can contribute to a variety of devastating diseases, from Alzheimer’s and Parkinson’s to diabetes and cancer.

Now, scientists at the University of California, Berkeley, have identified a molecular “switch” that controls the immune machinery responsible for chronic inflammation in the body. The finding, which appears online Feb. 6 in the journal Cell Metabolism, could lead to new ways to halt or even reverse many of these age-related conditions.

“My lab is very interested in understanding the reversibility of aging,” said senior author Danica Chen, associate professor of metabolic biology, nutritional sciences and toxicology at UC Berkeley. “In the past, we showed that aged stem cells can be rejuvenated. Now, we are asking: to what extent can aging be reversed? And we are doing that by looking at physiological conditions, like inflammation and insulin resistance, that have been associated with aging-related degeneration and diseases.”

In the study, Chen and her team show that a bulky collection of immune proteins called the NLRP3 inflammasome — responsible for sensing potential threats to the body and launching an inflammation response — can be essentially switched off by removing a small bit of molecular matter in a process called deacetylation.

Overactivation of the NLRP3 inflammasome has been linked to a variety of chronic conditions, including multiple sclerosis, cancer, diabetes and dementia. Chen’s results suggest that drugs targeted toward deacetylating, or switching off, this NLRP3 inflammasome might help prevent or treat these conditions and possibly age-related degeneration in general.

By studying mice and immune cells called macrophages, the team found that a protein called SIRT2 is responsible for deacetylating the NLRP3 inflammasome. Mice that were bred with a genetic mutation that prevented them from producing SIRT2 showed more signs of inflammation at the ripe old age of two than their normal counterparts. These mice also exhibited higher insulin resistance, a condition associated with type 2 diabetes and metabolic syndrome.

The team also studied older mice whose immune systems had been destroyed with radiation and then reconstituted with blood stem cells that produced either the deacetylated or the acetylated version of the NLRP3 inflammasome. Those who were given the deacetylated, or “off,” version of the inflammasome had improved insulin resistance after six weeks, indicating that switching off this immune machinery might actually reverse the course of metabolic disease.

“I think this finding has very important implications in treating major human chronic diseases,” Chen said. “It’s also a timely question to ask, because in the past year, many promising Alzheimer’s disease trials ended in failure. One possible explanation is that treatment starts too late, and it has gone to the point of no return. So, I think it’s more urgent than ever to understand the reversibility of aging-related conditions and use that knowledge to aid a drug development for aging-related diseases.”

Co-authors of the study include Ming He, Hou-Hsien Chiang and Hanzhi Luo, previously at UC Berkeley where the research was carried out; Zhifang Zheng, Mingdian Tan, Rika Ohkubo and Wei-Chieh Mu at UC Berkeley; Qi Qiao, Li Wang and Hao Wu at Harvard Medical School; and Shimin Zhao at Fudan University.

This research was supported in part by the National Institutes of Health under grants R01DK117481, R01DK101885, R01AG063404, R01AG 063389, DP1HD087988 and R01Al124491; the National Institute of Food and Agriculture; the France-Berkeley Fund, a Glenn/AFAR Scholarship; the Dr. and Mrs. James C.Y. Soong Fellowship; the Government Scholarship for Study Abroad (GSSA) from Taiwan; the ITO Foundation Scholarship and the Honjo International Scholarship.

-This article first appeared on the Berkeley News website.

Mike Boots, an author of a new study on the role of #bat immunology in outbreaks such as #coronavirus, worked with… https://t.co/cet9z4PhhP