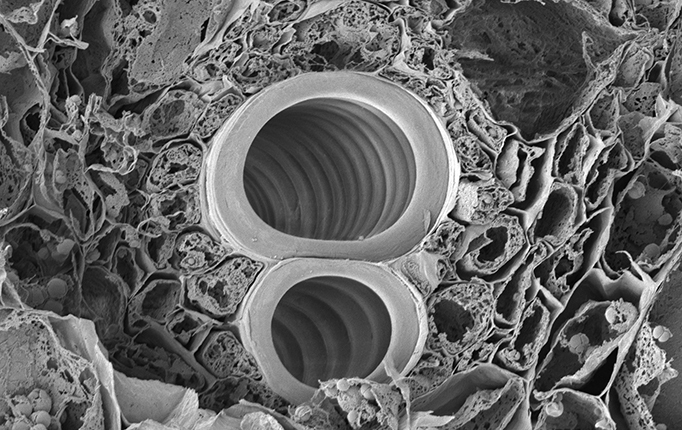 An electron micrograph of the protoxylem in maize. Photo by Zhaobin Dong.

Maize plants require an abundant water supply and moderate temperatures to accomplish fertilization and produce seed. Proper hydration levels are necessary for each stage of maize fertilization, and excessive heat can cause its pollen to become infertile. As climatic change begins to impact widespread agricultural areas, understanding the mechanism of resistance to drought and heat stress in crop plants such as maize is vital.

In a study published in Proceedings of the National Academy of Sciences  today, Zhaobin Dong, Ling Xu, and George Chuck, members of the Plant Gene Expression Center, analyzed the genetics of a maize mutant which causes plants to express responses to drought and heat stress.

The mutant is caused by the gene necrotic upper tips1 (nut1), which encodes a protein that controls genes responsible for maintaining the structure of the protoxylem cells. Protoxylem, one of the first-formed vascular cells, are vital for early water circulation in the plant. The effects of the nut1 gene were studied using dye uptake and movement assays which reflect the ability of protoxylem to function under stress.

“It seems obvious now, but I wouldn’t have guessed that resistance to heat stress and drought stress have a common physiological mechanism, both operating through high volume water movement early in the protoxylem,” says George Chuck, an associate researcher in the Plant & Microbial Biology Department. “It seems clear to me that if we want to breed plants resistant to the compound effects of climate change, we should probably select for efficient protoxylem function, something we may be able to do using the nut1 gene.”

The research is the product of a collaboration between partners Ling Xu and Zhaobin Dong, as well as researchers from Rutgers University. The study can be found on the Proceedings of the National Academy of Sciences  website.