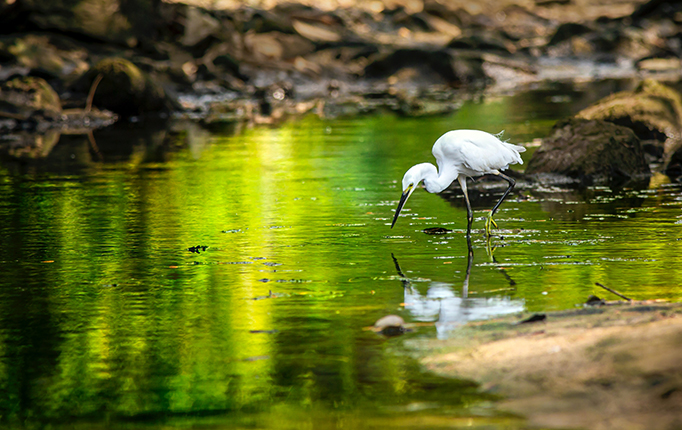 In 2019, the Trump administration’s Environmental Protection Agency (EPA) repealed federal Clean Water Act (CWA) protections from millions of acres of wetlands and millions of miles of streams. A new analysis, co-authored by associate professor Joseph S. Shapiro in the Department of Agricultural and Resource Economics, concludes that the rollback was based on dubious methodology and flawed logic.

The Report on the Repeal of the Clean Water Rule and its Replacement with the Navigable Waters Protection Rule to Define Waters of the United States  was written by a group of environmental economists from leading research institutions across the United States. “The EPA’s decision to make major changes to the rules protecting the nation’s waterways relies on economic analysis that may underestimate the benefits of streams and wetlands, especially as they affect waters downstream,” says David Keiser, a co-author from the University of Massachusetts, Amherst. “The EPA also failed to adhere to its own guidelines. The new rule includes many contradictions that are inconsistent with the best available science,” he says.

The EPA and the Army Corps of Engineers had repealed the Obama-era Clean Water Rule, which clarified which bodies of water received federal protection from pollution under the 1972 CWA. Earlier this year, the agencies replaced that rule with the new Navigable Waters Protection Rule, effectively removing isolated wetlands and ephemeral and intermittent streams from federal pollution protection.

According to a 2017 staff analysis by the EPA and the Army Corps, the new rule leaves over half of U.S. wetlands and 18 percent of U.S. streams unprotected, including 35 percent of streams in the arid western United States.

While developing the rule, the EPA and the Army Corps of Engineers considered water quality as only a “local public good.” The report finds that the agencies ignored extensive scientific research showing that even ephemeral streams and isolated wetlands connect to larger watersheds. What happens upstream affects waterways downstream, increasing the risk of flooding, diminishing water quality, and causing other problems that cross state borders. The authors conclude that this artificially narrow view skews benefit-cost analyses to favor the removal of regulations.

The authors also point out that the agencies relied on some questionable assumptions. For example, EPA projections of nationwide benefits assumed that every state—from arid places like Nevada or Arizona to wetland-rich states like Florida—has the same baseline number of wetland acres. In addition, the agencies’ benefit-cost analyses were based on the assumption that reducing federal protections for streams and wetlands wouldn’t damage water quality, since states would pass their own laws protecting waterways as needed.

“Experience shows that’s just not credible,” says Sheila Olmstead of the University of Texas at Austin, a report co-author. “We have a real-world apples-to-apples comparison to look at: When the Supreme Court removed federal protection from many U.S. wetlands by overturning the Migratory Bird Rule in 2001, only a few states moved to expand their own jurisdiction over some of the affected waters over the next 20 years. Given this prior behavior, EPA’s prediction that dozens of states will move to protect wetlands and streams this time around seems highly unlikely. In addition, assuming that many states will enact new legislation that doesn’t currently exist violates EPA’s own Guidelines for Preparing Economic Analysis.”

"Water quality is important enough that we need to use the best available evidence to design policy,” says Shapiro. “Unfortunately, these new federalism arguments represent policy by questionable assumption more than careful analysis.”

Environmental federalism—the theory that states do a better job at environmental regulation than the national government—can work in some situations; however, it is not supported in this case, the authors find.

President-elect Joe Biden has said that his administration will review the Trump administration’s decision to remove CWA protection from wetlands and intermittent streams. But reversing that decision could prove to be a difficult process. At least a dozen court cases have been filed so far, and defining the protected waters of the United States has been the subject of debate for decades.

In the meantime, businesses are not waiting to take advantage of the weaker rules. For example, Twin Pines Minerals says it no longer needs a federal permit and so will start work on a controversial titanium dioxide mine near the edge of the Okefenokee Swamp in Georgia, which is home to the largest National Wildlife Refuge east of the Mississippi.

“The Biden Administration will attempt to respond to a number of EPA rule rollbacks undertaken by the Trump Administration. This report points to how a Biden Administration can correct structural weaknesses in this rule as well as other important EPA policies,” says JR DeShazo, who directs UCLA’s Luskin Center of Innovation and is a founding co-chair of the External Environmental Economics Advisory Committee (E-EEAC), an independent organization providing economic advice to the EPA.

The E-EEAC, which commissioned the report, is supported by UCLA’s Luskin Center for Innovation and partially funded by the Sloan Foundation. It was established after the EPA dissolved its own internal Environmental Economics Advisory Committee (EEAC) in 2018. The EEAC had contributed to policy analysis for 25 years as part of the EPA’s science advisory board system, and the E-EEAC continues this important work from outside the agency.

—This article was adapted from a press release on the UCLA Luskin Center for Innovation website.