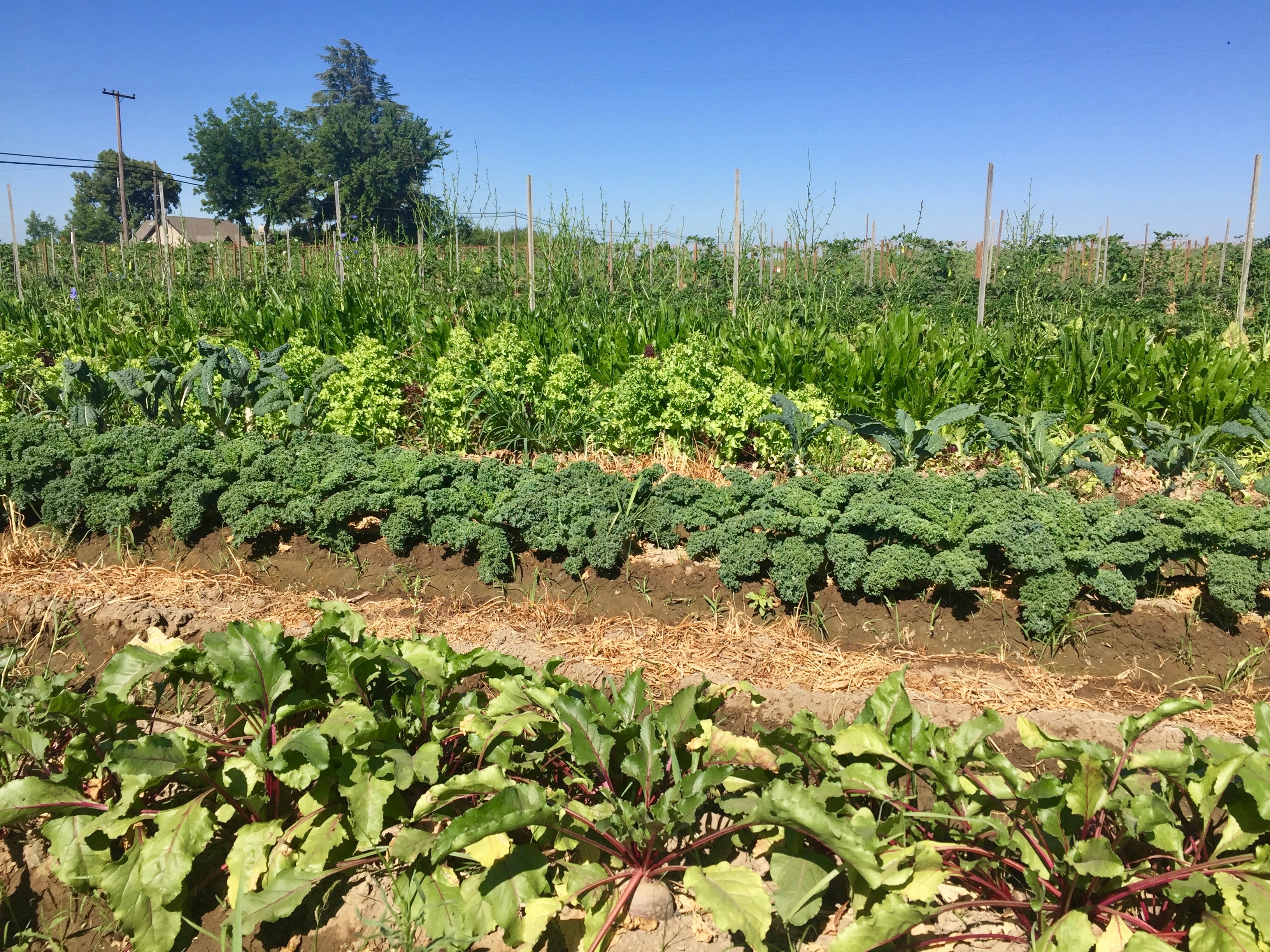 For Aidee Guzman, a doctoral student in the Department of Environmental Science, Policy, and Management (ESPM), the setting of her most recent research project in California’s San Joaquin Valley is a return home. She grew up outside of Fresno, a city situated in a diverse farming community that also happens to be one of the most productive agricultural regions in the country.

In returning to the San Joaquin Valley, Guzman seeks to understand whether decades of intensive agricultural monoculture have irreversibly harmed soil biodiversity. Her research also raises questions as to whether small-scale polyculture farms can help restore or enrich those soil ecosystems, following a long legacy of monoculture and intensive production.

In a recent study published in the journal New Phytologist,  Guzman and her co-authors examine how crop diversity affects a symbiotic fungus group across monoculture and polyculture systems. Central to the study process was partnership with both monoculture farmers and a group of small-scale, polyculture farmers. By working with a University of California Agriculture and Natural Resources (UCANR) Cooperative Extension specialist, Guzman is hopeful that her research can prove useful for the scientific community, farmers, and soil ecosystems alike.

“Monoculture has continuously depleted not only fungal communities, but other important soil biodiversity,” said Guzman. “In this research, we wanted to consider how different farming systems had impacted these soil communities.”

Soil microorganisms are critical to various essential ecosystem functions, both below and above ground. Among the key soil microorganisms are the arbuscular mycorrhizal fungi (AMF), symbionts that aid in plant nutrient acquisition, drought tolerance, pathogen protection, water uptake, and numerous other functions that affect plant health. 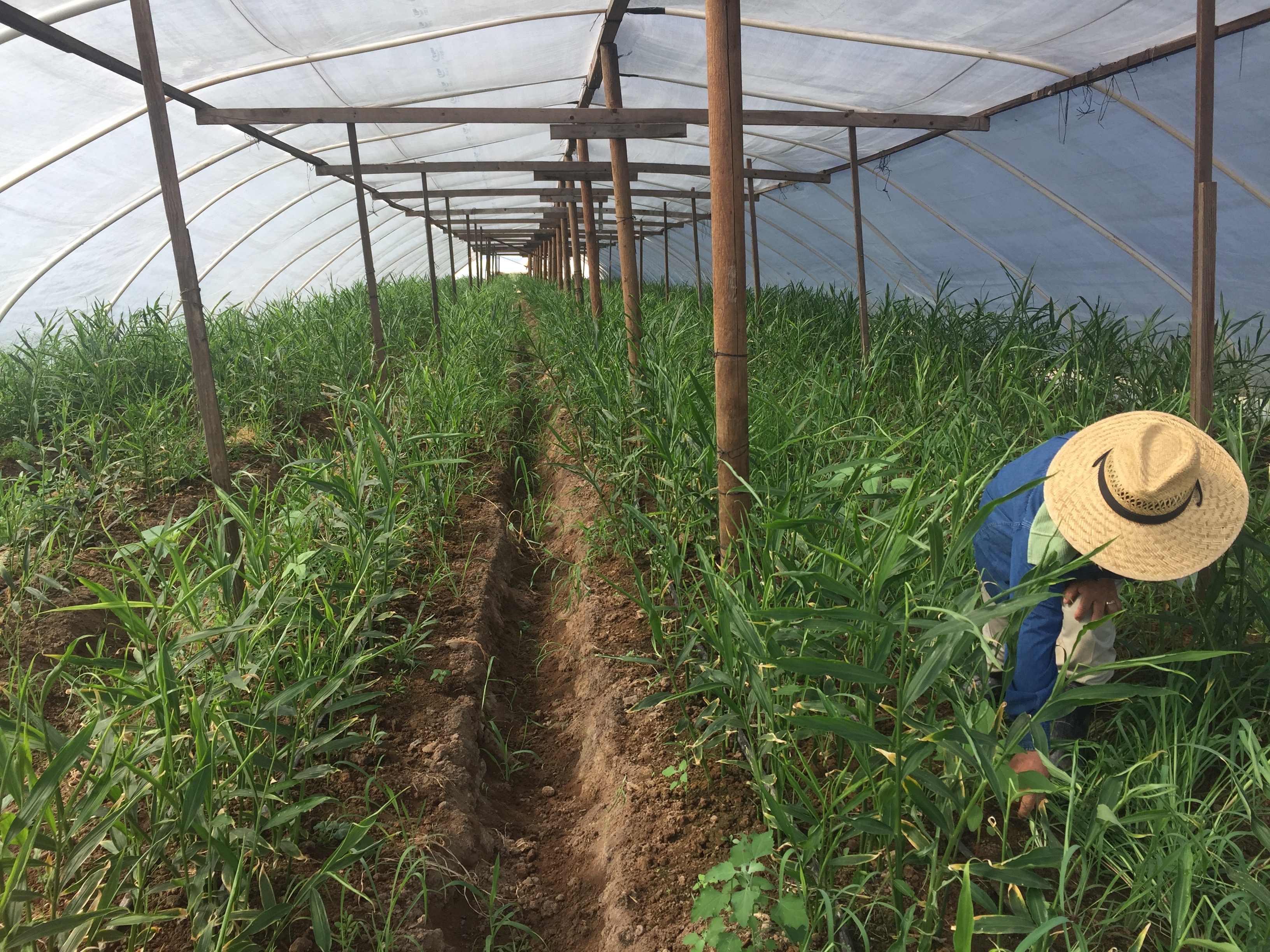 Over decades of intensive monoculture agriculture in the Central Valley, much of the soil in California and the country has significantly depleted AMF communities. Most farms in the region are big, spanning over 100 acres with large quantities of single crop varieties like squash and eggplant. Such monoculture operations are generally characterized by using high levels of synthetic fertilizers and pesticides, growing with little crop diversity, and frequently disrupting the soil with tilling.

​But many smaller farms have operated for decades in the region beside the monoculture farms. The polyculture farmers with whom Guzman works are predominantly Hmong refugees  and Mexican immigrants. They employ polyculture on plots that are closer to 20 acres in size, and in total, they represent a small percentage of the farmland area in the Central Valley.

Polyculture farms grow as many as 20 different crop varieties, do not disturb the soil with tilling as frequently, and limit chemical fertilizers and pesticides. Many of the polyculture farms grow squash and eggplant, but in stark contrast to the monoculture farms that exclusively grow such crops, they also harvest a wider diversity including bok choy, papaya, ginger, bitter melon, chard, asparagus, and lemongrass.

Guzman said that many of the farmers choose to grow a diverse set of crops because of their farming background in their homeland, where they also practiced polyculture farming. “Since they immigrated to the U.S., they wanted to be able to grow culturally relevant crops for themselves and their community,” she said. 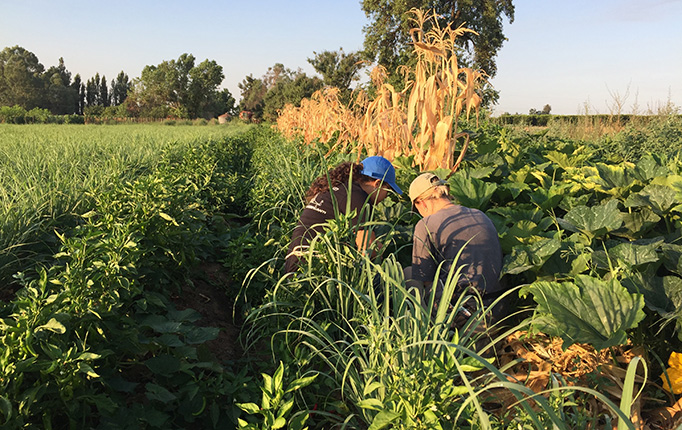 Research interns Jennifer Becerra and Marissa Chase collecting plant and soil samples on a polyculture farm for the study. Photo by Aidee Guzman.

To conduct the study, Guzman first had to identify participant farmers who farm with polyculture. To do so, she collaborated with Cooperative Extension specialist Dr. Ruth Dahlquist-Willard, a UCANR Small Farms Advisor in Fresno and Tulare Counties. Dahlquist-Willard introduced Guzman to several farmers with whom she works and also helped to inform the study research design.

Dahlquist-Willard conducts research and extension programs to benefit small-scale farming operations and specialty crops, particularly in immigrant communities. Her program assists small-scale and diversified family farms so that they can thrive economically. This also includes bilingual and culturally-relevant training, specialty crops research, and policy engagement guidance. Through the partnership, Guzman began to consider practical applications that could benefit farmers in her soil biodiversity research. 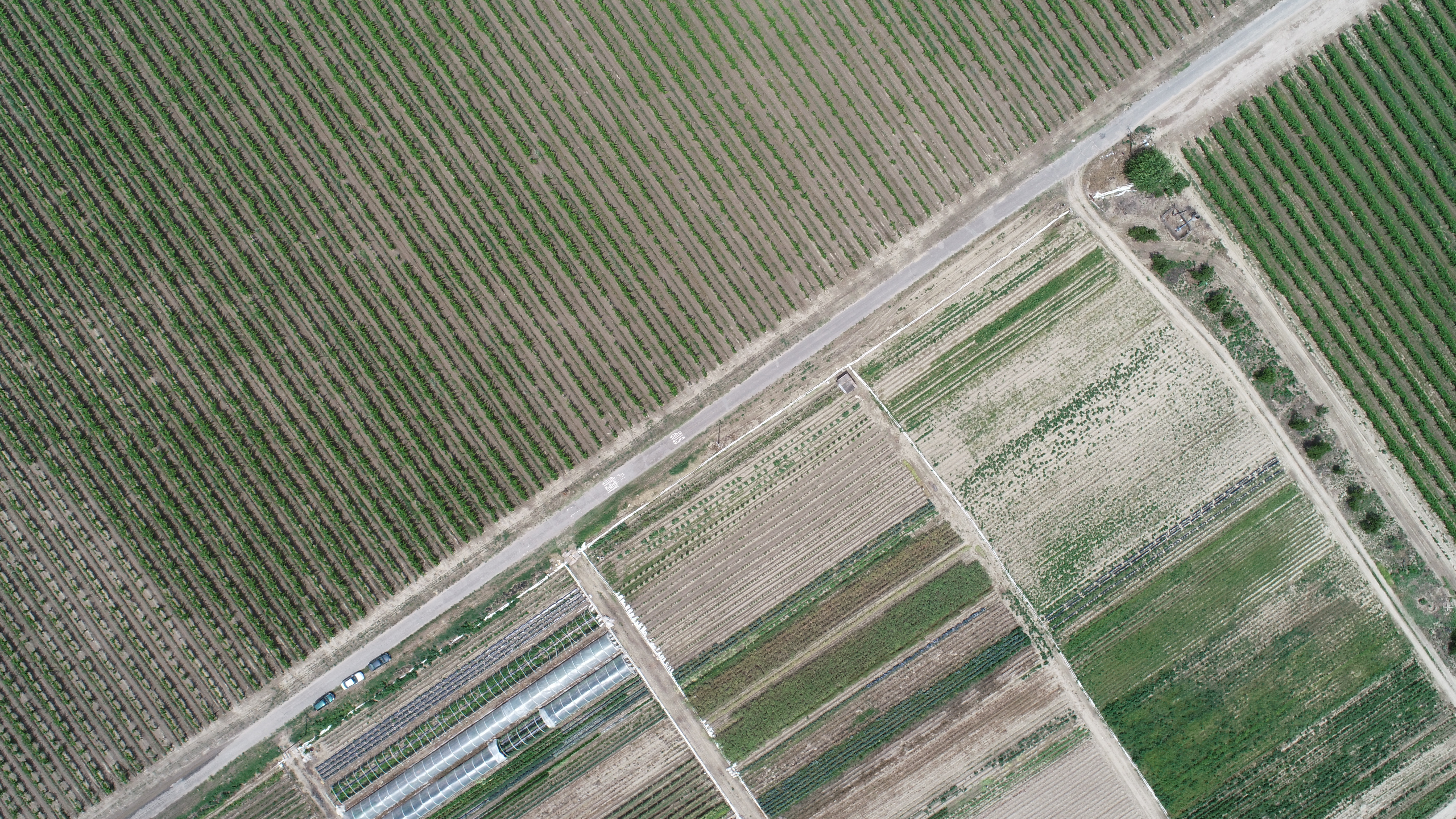 To locate polyculture farms, Guzman and Hutchins used aerial searches, identifying the farms by their variable crop rows. This aerial image captured by a drone shows the visual differences between polyculture and monoculture farms that were used to locate farmer participants using GoogleMaps. Photo by Wenjing Xu.

Guzman and Hutchins visited more than 50 farms, identifying sites with similar varieties of crop. Based on an initial assessment of Google Maps aerial images, they were able to identify other polyculture operations by the variation in crop layouts. They then drove out to the farms and approached the farmers with an informational flyer, requesting that they join the study. In return, Guzman and her team offered to provide a detailed scientific soil analysis.

Over two years, Guzman built relationships with 25 farmers and took over 400 soil samples, from both monoculture and polyculture fields. To accommodate the harvesting schedules, she and her students sometimes would arrive as early as 3:00 am to sample the soil. As promised, Guzman then conducted full soil profiles for the growers so that they might learn more about the chemical and biotic compositions of their farmland.

Guzman assessed soil compositions for species richness, diversity, and composition across 31 field sites that utilize either monoculture or polyculture systems. Her conclusions were significant: the data showed that polyculture farms nearly double the number of AMF species in comparison to monoculture. Guzman’s results also show that greater plant diversity can indeed change the AMF community in a richer and more diverse community – a relationship that still remained unclear for agricultural systems prior to this research.

The findings support a generally accepted principle in ecology: greater diversity promotes greater ecosystem function. AMF are selective in the plants they associate with, so different crops support different varieties. Some AMF are better at absorbing phosphorus for the plant, for instance, and others could help the plant resist drought conditions. Still other types of AMF simply cheat and steal soil carbon, to the detriment of plants.

“People are not often thinking about soil being a living system,” said Guzman. “In many ways, soil ecology is a nascent field that has a lot to still be discovered.” Though soil dynamics are complex, her evidence suggests that the restoration of AMF communities could be key to the improvement of degraded soil health, with potential benefits to crops and farmers. 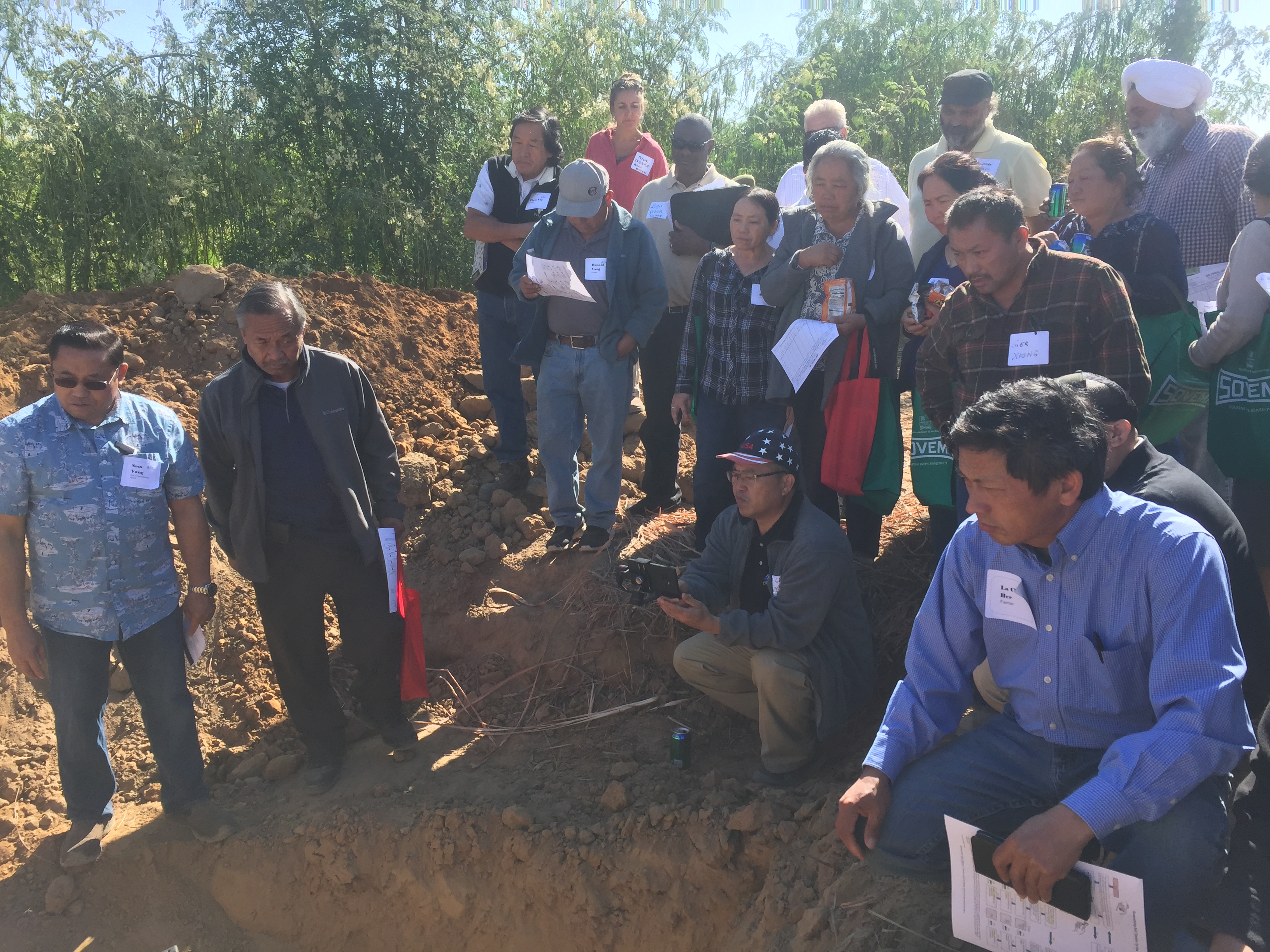 Soil pit demonstration in NRCS led workshop in Fresno County on one of the participant's farms. During this workshop, Guzman led an interactive hands-on workshop with farmers for farmers to visually understand the role of mycorrhizal fungi in plant nutrient uptake. Photo by Aidee Guzman.

Working with Dahlquist-Willard, Guzman is hopeful that—beyond better understanding soil ecology and plant health through her research—practical social benefits can be realized in the immigrant farming communities that she studies. By providing a baseline measurement of AMF, the research offers an important biological indicator of soil health. “I hope that my research can support farmers and create value for them and their communities,” said Guzman. “The ability to measure biodiversity in soil communities can help link farming practices and improvements to crop productivity, soil nutrients, water retention, and more.”

In addition to sharing soil data with her partner farmers, Guzman has also done outreach and educational work in the Central Valley. For the USDA Natural Resource Conservation Service (NRCS), she led a workshop on soil biodiversity and soil health, which discussed the benefits of crop rotation and other soil biodiversity-boosting practices. Many of the farmers who participated in her research were in attendance, and the workshop was translated to Hmong by Sam Vang, soil conservationist at NRCS. In the workshop, Guzman led a hands-on activity that involved farmers interacting with each other to illustrate the important role of mycorrhizal fungi in facilitating nutrient uptake.

Guzman has also led other similar workshops in Spanish for UC Cooperative Extension and the National Center for Appropriate Technology. Guzman will also soon appear on the radio station El Gallito (KCHJ 93.7am) in collaboration with American Farmland Trust to talk about soil health and reach a larger Spanish-speaking community. 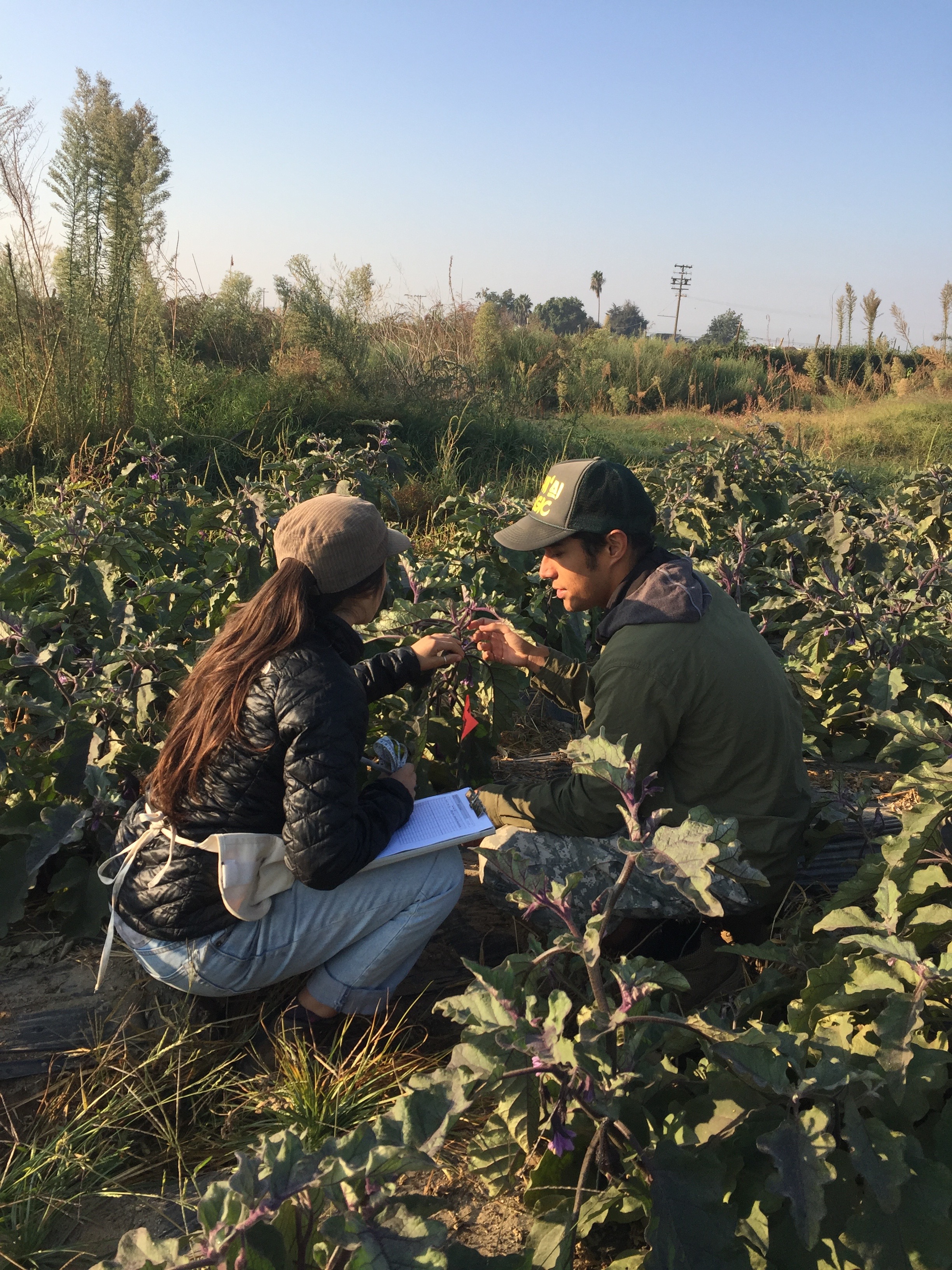 Looking ahead, Guzman hopes that her findings can help inform policy to support the farmers implementing polyculture practices, in a system where market incentives often push producers to adopt more intensive monoculture at the expense of ecosystem health. She also plans for her future research to focus on potential practical applications with soil biodiversity and soil health that can benefit farmers.

Guzman adds that polyculture farm operations support an entire cultural ecosystem that is tied to diversified farming. “Having grown up in an immigrant family, I’m familiar with how decisions of what farmers grow can provide a cultural anchor and bring cultural diversity to the community through food.”

On April 29th, Guzman will present her research in the 2021 Distinguished ESPM Lecture by a Graduate Student. The event is free and open to the public and registration can be found on the Rausser College of Natural Resources events webpage.

Updated May 5, 2021: Watch Aidee Guzman deliver the 2021 ESPM Distinguished Lecture by a Student below.