As fire once again sweeps through the American West, an interagency report formally released today estimates that 7,500 to 10,600 large giant sequoias were killed in last year’s Castle Fire. This represents 10-14% of large sequoias in the world. Today, the agencies united by stewardship of giant sequoias are officially coming together in partnership, under the new Giant Sequoia Lands Coalition, to save the remaining 90%. As steward of Whitaker’s Research Forest, UC Berkeley is a part of the coalition. 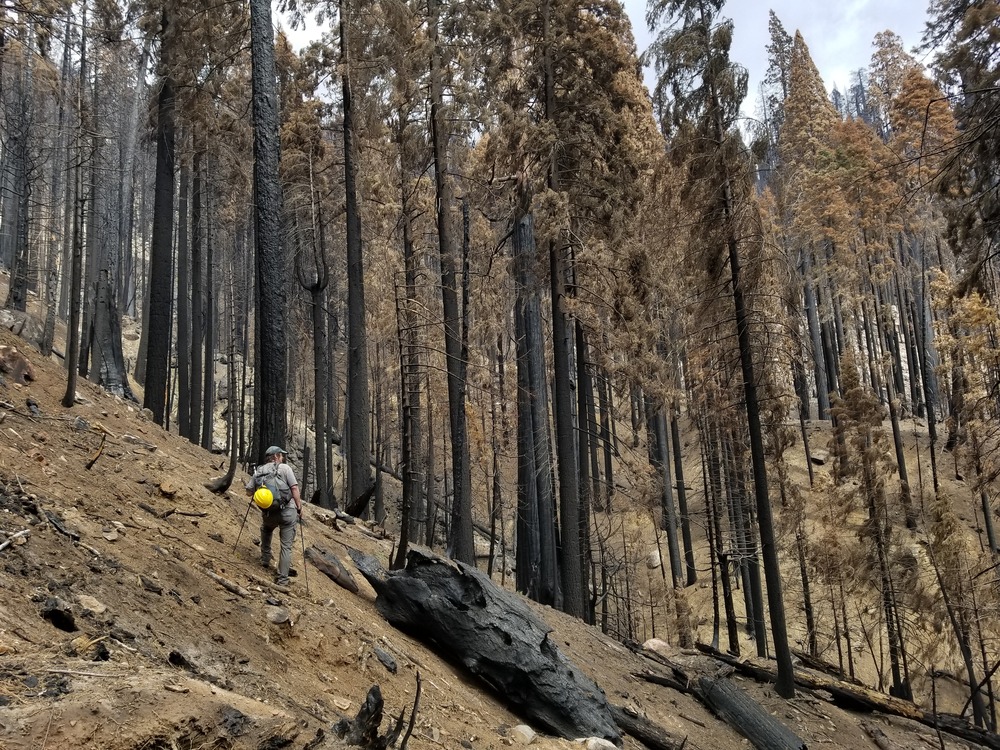 A ranger stands on a hill of dirt in front of scorched black and brown trees. This April 2021 photo of the Board Camp Grove in Sequoia National Park shows that many sequoias were killed during the Castle Fire.

In 2020, the Castle Fire, part of the larger SQF Complex Fire, burned more than 170,000 acres across Giant Sequoia National Monument, Sequoia National Park, Mountain Home Demonstration State Forest, and private lands. According to the “Preliminary estimates of sequoia mortality in the 2020 Castle Fire" report—released today and authored by the National Park Service and the U.S. Geological Survey, Western Ecological Research Center, in collaboration with the U.S. Forest Service, Save the Redwoods League, The Nature Conservancy, and a local conservationist—more than 10% of the entire existing population of large giant sequoias were killed by this fire alone. While giant sequoias require periodic low-to-moderate intensity fire to maintain healthy ecology, much of the Castle Fire burned too intensely for even these great survivors.

A history of fire suppression and hotter droughts driven by climate change has resulted in denser forests with extraordinary levels of fuel loading. These conditions have changed how wildfire burns in the southern Sierra Nevada, resulting in large areas of high severity fire effects and massive fire events.

“The unprecedented number of giant sequoias lost to fire last year serves as a call to action,” said Clay Jordan, Sequoia and Kings Canyon National Parks Superintendent. “We know that climate change is increasing the length and severity of fire seasons due to hotter temperatures and drought. To combat these emerging threats to our forests, we must come together across agencies. Actions that are good for protecting our forests are also good for protecting our communities.”

“Recent events have shown that sustaining the health and vitality of the remaining Sequoia groves and surrounding forests is becoming more challenging as they face new and unprecedented threats. Collaborating across the diverse land managers who have unique skills and capabilities will be necessary to ensure that the giant sequoias continue to flourish. Berkeley Forests welcomes the opportunity to share the wealth of giant sequoia research, not only from Whitaker's Forest, but from our entire network of researchers and research forests,” said Bill Stewart, Berkeley Forests Co-Director.

The Giant Sequoia Lands Coalition has been formed with an eye toward the future, to better enable land managers to protect the remaining giant sequoias. It is comprised of all public and Tribal land management agencies in stewardship of giant sequoias with the support of affiliate partners including the U.S. Geological Survey, Western Ecological Research Center, Save the Redwoods League, Sequoia Parks Conservancy, Stanislaus National Forest, and Giant Sequoia National Monument Association.

Coalition members will be hosting public and media events over the coming months to raise awareness and public knowledge about sequoia health and research, ongoing projects, the effects of recent fires, and more. Information about these events will be released as plans are finalized.

The members of the Giant Sequoia Lands Coalition are:

The goals of the coalition are to increase wildfire resilience in our forests and communities; address long term planning for climate change through research and monitoring; increase pace and scale of treatments to reduce destructive forest fuels through prescribed burning and restorative thinning; and increase efficiency through partnerships aimed at policy changes that allow for more swift action.

“As Native People, we have a spiritual and cultural connection with the land. For thousands of years, these trees have provided healing, shelter, and warmth to our people,” William Garfield, Chairman of the Tule River Tribal Council, said. “It is our duty to do everything in our power to make sure that they are protected, so we can pass them on to our future generations as they were passed down to us.”

“We regret the loss of our old-growth giant sequoia trees that were killed in the Castle Fire,” said Jim Kral, Mountain Home State Forest Manager, and forester from CAL FIRE’s Tulare County Unit. “However, we were triumphant in protecting the majority of the Mountain Home Grove through our long-term planning and commitment to actively managing the forest. CAL FIRE looks forward to working with our partners in applying the lessons learned from the Castle Fire to improve the future management of these majestic groves in the face of a changing climate and more intense wildfires.”

For the full report, more information, and resources about emerging threats to giant sequoias visit www.nps.gov/seki/learn/gslc.htm.

With a grant from the @NSF, assistant professor Trevor Keenan will lead the FLUXNET Coordination Project, a global… https://t.co/siyXAMKDoL

RT @igisci: Soil microbes are a major source of #GreenhouseGases. @science_doodles &amp; other @BanfieldLab researchers are studying just how t…

"Our future sits on the edge of a knife." — Op-ed by @dan_kammen and @Prof_MPastor in @sfchronicle urges California… https://t.co/npKzpCPg9P