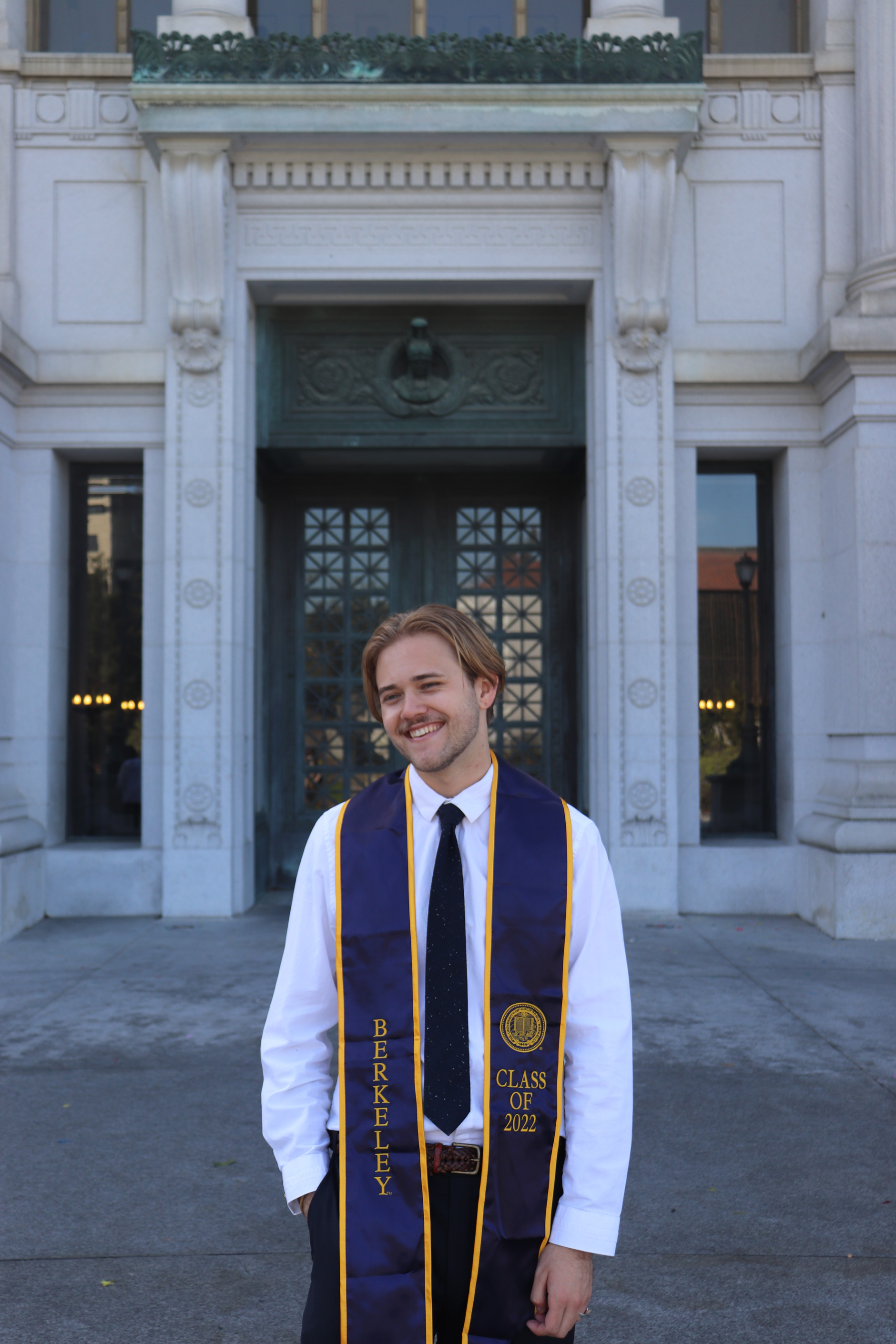 Jacob Dadmun, a graduating society and environment major, will be the student speaker at Rausser College's 2022 commencement.

By his count, graduating Society and Environment major Jacob Dadmun has only had one “normal” year at UC Berkeley.

“The college experience is so hyped up in American culture, and a lot of people reminisce that this was the best four years of their life,” Dadmun said. “I’m not going to lie: to have so much of this taken away was really brutal.”

Smoke and ash from megafires turned the sky an unforgiving shade of dark orange, severely degraded the air quality, and forced the cancellation of classes his freshman year. On top of that, the ongoing COVID-19 pandemic upended most of his last two years at Berkeley.

But despite the challenges, Dadmun remains an incurable optimist. Like the writer and activist James Baldwin, Dadmun refuses to resign to pessimism—opting instead to focus on the agency and ability of his graduating class to change their communities for the better.

During his time at Cal, Dadmun brought his optimistic, solution-oriented mentality to his DeCal class on applying Traditional Ecological Knowledge within a policymaking framework. He’s also used it to guide coverage as an editor of The Leaflet, the Student Environmental Resource Center’s undergraduate environmental journal.

And, on Sunday, Dadmun’s message of optimism will lead him to the stage at the Greek Theater. There, he will address his family, classmates, and Rausser College community as the 2022 student commencement speaker.

Dadmun spoke to Rausser College about his time at Berkeley ahead of his speech.

This conversation has been edited for length and clarity.

Why did you come to Rausser College?

I knew I wanted to study environmental policy, and I always wanted to go to a small, liberal arts school but I couldn't find anything I could afford. One of the cool things about this College is it still feels small and because we’re at Berkeley, there are a lot of people who are very different—you get a much greater diversity of student experience. I'm really glad that I came here because if I had gone to a small private school, I would have met a lot of people who are like me. You also get things like the DeCal program—I’ve never heard of another initiative at any other school that’s even comparable.

Have you enjoyed teaching your DeCal?

I would say it is probably the coolest thing I've done here and I'm very proud of it. My three-unit class is on Traditional Ecological Knowledge—the study of how indigenous people manage natural resources—and how you can apply that to policy in California. I decided to teach it after taking both ESPM 50, an introduction to culture and natural resources management, and ESPM 22, which is a history of fire in California.

It was fascinating to hear about people whose management and stewardship of the land wasn’t about reducing the harm that humans were doing, but increasing the good. That was not really something I had often heard about in environmental spaces. The idea that humans can be a positive force on the landscape was inspiring to me. It showed me that humans aren't inherently the problem—it's also whatever system we're currently running with. This was the type of class that I wanted to take but it didn't exist at the time, so I decided to teach it as a DeCal.

I’m really appreciative of Professor Lynn Huntsinger, our faculty sponsor, who has been really supportive of the vision and the project. She encourages me when needed but also lets me branch out on my own.

What would you say was your “Berkeley moment”?

Fall 2018 was my freshman year, and also the year of the big climate strike during the Global Climate Action Summit in San Francisco. I was taking ESPM 50 at the time, which was a huge survey class. Our instructor, Kurt Spreyer, brought me and a couple of other students to the protest. That was a great experience—it helped me realize that our College is a very vibrant community filled with people who are so helpful and kind. I'm still friends with some of the people I went to the protest with, and to this day I still run into others all the time. That moment really sticks out to me. 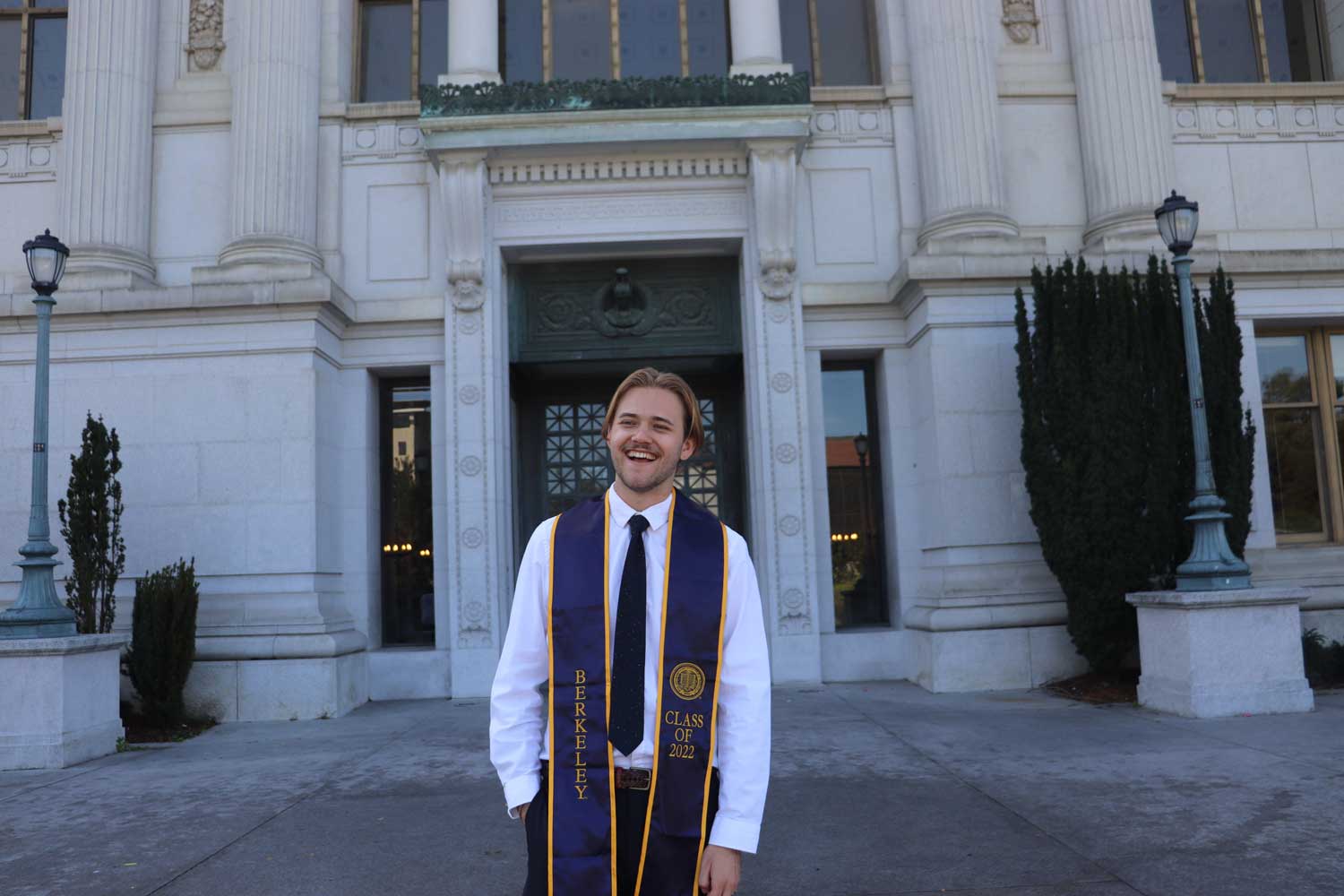 How has it been trying to navigate college with so much disruption?

The second semester of my freshman year and the first semester of my senior year were the only times I didn’t have classes canceled unexpectedly. Wildfire smoke, power outages, and the last two years of the pandemic have all affected my time at Cal. I’m not going to lie: at times it really sucked. I remember having this feeling particularly when the pandemic was first happening and I was back in my childhood bedroom.

And on top of that, for a lot of my life, there’s been this threat of growing up in a world where the climate has changed, or where things are more unpredictable or more dangerous. There's a significant portion of people in my generation who sincerely believe that their quality of life will be worse than their parents’. That can be really hard to think about.

Is it hard to remain an optimist during these times?

There’s a James Baldwin quote that I really like where he talks about being an optimist. He said he refuses to be a pessimist because he’s alive—that being a pessimist means you’ve resigned human life and the human experience to academic study. This isn’t some sort of theoretical concept or dystopian novel, this is an experience that’s happening in the world right now. Being a pessimist is almost like a release of responsibility because you think that we have nothing to lose, or very little to fight for. At the end of the day, pessimism—and even pessimism masquerading as realism—is a dead end because you have no motivation to change your behavior.

I talk about this in my speech a little bit, but I think we have to rebrand optimism as “strategic optimism.” Optimism is a conduit for us to transform the anxiety we're feeling into action. It's the belief that we can do something and that we should do something. It’s the confluence of agency and urgency that inspires people to change the world. Sure, the risk might be great and we have a lot that can go wrong, but there's also a lot that can go right. We have to remember that it's our choice and that we have agency in this situation.

How does it feel to be finally walking the stage, and what do you hope to do after graduation?

I used to feel very nervous about graduating. It was just such a huge change, but now I think I've come around to the idea of it. I've come to accept and be excited about the fact that there is a lot left for us to do. I’m going to be participating in the summer forestry camp in the Sierra Nevada Mountains—I think that will be a good change of pace. After that, I’d like to go back to graduate school and get a Master’s in Public Policy. I'm really interested in wildfire land use policy, particularly how landscapes can help in the fight against climate change.

Tune in to Rausser College commencement on Sunday, May 15 at 7 pm to hear Dadmun’s speech.