Large, tall trees serve as the backbone of mature forests throughout California and the West. These trees provide important ecosystem services for humans and critical wildlife, including the California spotted owl and the Pacific fisher—a cat-sized mammal whose population in the southern Sierra Nevada population is endangered.

Unfortunately, these critical ecosystems are increasingly threatened by uncharacteristically severe wildfires and prolonged droughts that kill millions of trees.

A recent study conducted by scientists from UC Berkeley and the U.S. Forest Service documented widespread forest disturbance from 2011 to 2020. Published in Ecological Applications, the study found that 30% of the region’s conifer forests were lost to non-forest vegetation during that time period. The researchers also found that 50% of ecologically valuable mature forest habitats and 85% of high-density mature forests transitioned to either lower-density forests or non-forest. 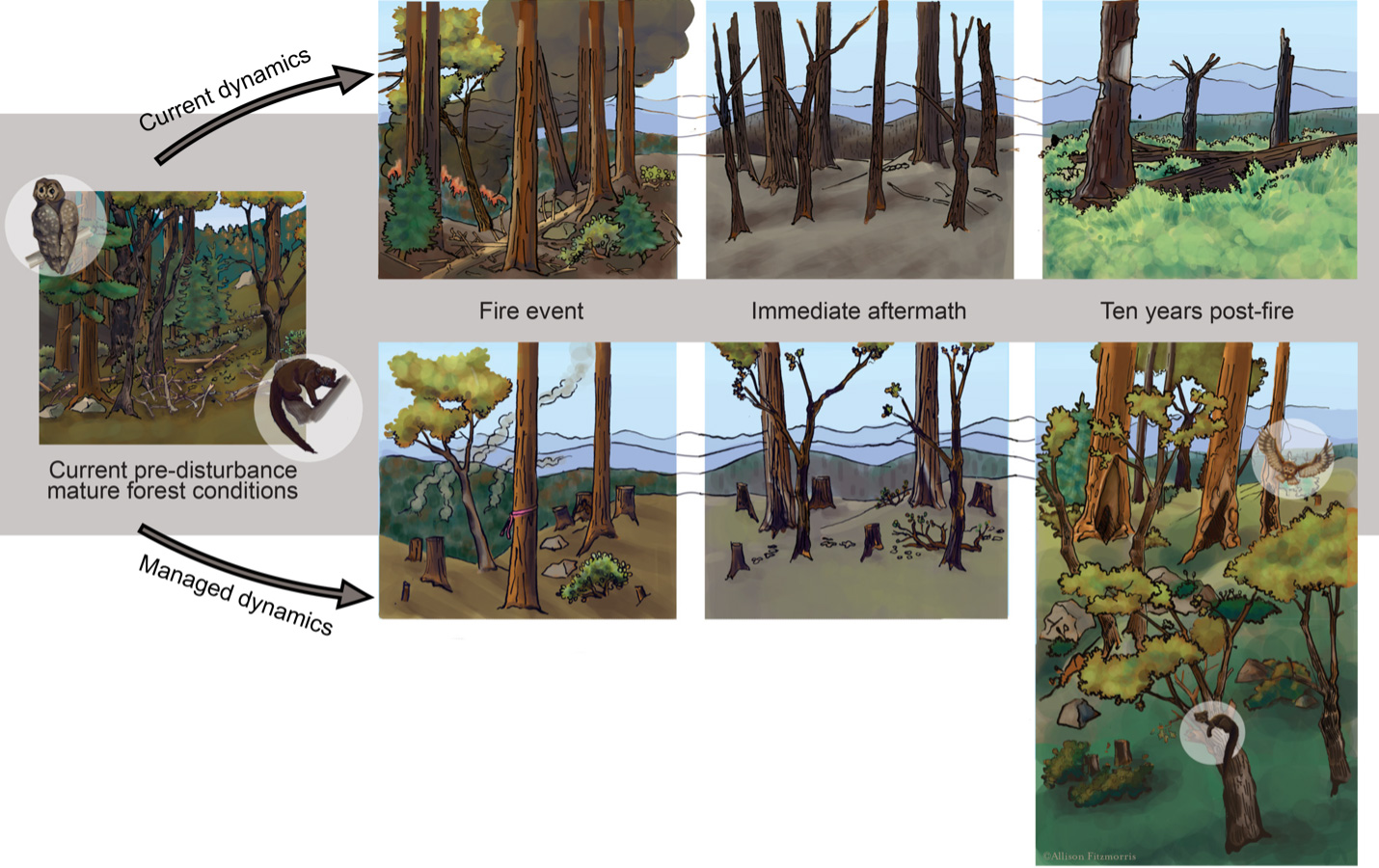 “The past decade has been a particularly alarming period of forest decline in the southern part of the Sierra Nevada mountains in California,” said Forest Service scientist Zack Steel, who conducted the analysis as a postdoctoral researcher in the lab of Environmental Science, Policy, and Management professor Scott Stephens. Steel stresses that these disruptions hold potentially grave consequences for wildlife that are dependent on old, mature forests.

The authors combined remote-sensing and modeling techniques to track annual declines in forest cover, comparing regions affected by drought to areas where wildfires or mechanical disturbances—typically timber harvests or forest thinning treatments—compounded the drought’s effect. They found that drought and the associated beetle attack caused greater cumulative declines than in areas where drought and wildfire mortality overlapped. Both types of natural disturbance far outpaced declines attributable to mechanical activities.

While drought mortality that disproportionately affects large conifers is particularly worrisome for species reliant on the large trees found in mature forests, Steel said large patches of severe wildfire are also highly problematic. In areas where all or most trees are killed by fire, forest recovery will be slow and forests can become highly fragmented, which can make it difficult for the Pacific fisher and other species to find remaining habitats.

Land managers currently exclude most human activities from regions that are deemed ecologically important for wildlife while attempting to suppress disturbances such as wildfire. These Protected Activity Centers (PACs) have been effective at reducing the harvest of large trees, but the strict measures limit low-severity fire and forest restoration treatments—two beneficial practices that can help prevent destructive mega-disturbances.

In the case of the California spotted owl, the authors tested whether designating the creature’s ecologically sensitive habitat as PAC is an effective protection strategy. High forest density makes areas designated as PACs valuable habitats for the owl and Pacific fisher while also increasing their susceptibility to disturbance. Forest cover within those regions declined at a faster rate than outside of PACs over the past decade, according to the study.

“Dense forests—especially when packed with small, flammable trees and shrubs—burn easily and intensely under hot and dry conditions supercharged by climate change,” said Steel. “These are widespread in California due to more than a century of fire suppression and exclusion of Indigenous fire management.”

While Steel maintains that there is no “silver bullet” for solving the crisis of mega-disturbances in the West, allowing low-severity disturbances—the intentional use of fire and ecological thinning—may help lower the risk of future mega-disturbances. Importantly, this approach would emphasize the retention of large, fire-resistant trees and other habitat features critical to imperiled mature forest-dependent wildlife.

Without a rapid transition from a conservation-based approach to one that manages sustainable disturbance dynamics, the remaining mature forest habitat in California may be susceptible to complete loss in the coming decades.