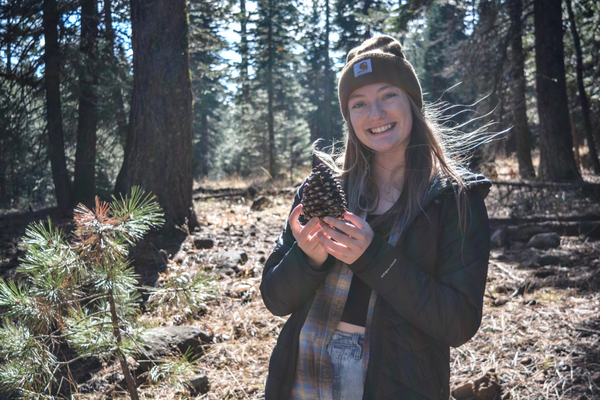 Coming to the large UC Berkeley campus was a very big shift for fourth-year Society and Environment major Ashlyn Olah.

Olah grew up in Chester, California, a town of roughly 2,000 people located on the northern shore of Lake Almanor. Olah was accustomed to “seeing the same 20 people every day for essentially my entire life” in the small logging town but enjoyed the area’s sense of community and outdoor recreation activities.

That sense of community played a major role in August 2021, when the Dixie Fire—the largest single-source wildfire in California history—circled around her town. Efforts by firefighters and townspeople kept the blaze from breaching Chester’s western flank and devastating the community.

Olah credits the Dixie Fire with inspiring her to pursue the Master of Forestry 4+1 program, which provides Environmental Science, Policy, and Management undergraduates an expedited path to completing the graduate degree in forestry. The program aligns part of the graduate curriculum with students’ final undergraduate semester and offers qualifying education and experience credit to meet the licensing requirements needed to be a Registered Professional Forester in California.

This conversation has been edited for length and clarity.

Why did you choose Rausser College?

I grew up surrounded by nature—it’s where I’m most comfortable and where I feel at home—but I came to UC Berkeley to study sociology. I realized it wasn’t for me during the second semester of my freshman year. I was interested in the natural world when I first came to college but wanted to try something different. Once I got here, I wanted to find a major where I can focus on policy (how we can make the environment better) and also resource management (what we can do to the environment to make society better), so I switched to Society and Environment in my second year and am pursuing the Master of Forestry. 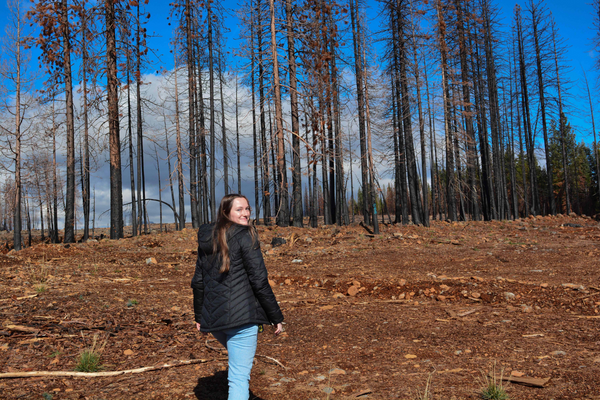 Olah walks in the Dixie fire burn area approximately half a mile from her house.

Was there anything that inspired you to pursue the Master of Forestry?

Growing up in a logging community showed me that forestry was a field that I could go into. But I really decided to pursue the Master of Forestry because of the Dixie Fire—that's what sparked my interest and passion for it. I’m interested in social ecology and how natural phenomena affect people. Seeing the aftermath of the Dixie Fire is why I’m passionate about how land and forest management, fire ecology,  social ecology, and remote sensing via geospatial technology all intersect.

What was your experience with the Dixie Fire, and how did Chester and the surrounding communities fare?

I was at home when the Dixie Fire broke out. I was there for every warning and the moment when the evacuation order was called during the middle of the day. I was about to come back to Berkeley because I'm a senior resident assistant and had to come back for training. My dad said, “You need to pack your car because I feel like we're going to get evacuated.” Black ash started to fall out of the sky by that point, and we got the evacuation order right after we finished packing my car.

The community of Greenville, which was completely devastated by the fire, is roughly a 20-minute drive away from Chester. People who I've known for a really long time lost their houses—including one of my closest friends—and it really devastated our surrounding communities. But because Chester is a logging town, the community stood up and took a lot of responsibility into their hands when the fire started moving towards us. I saw people creating fire breaks and defensible space, and thankfully CalFire, Forest Service, and other firefighters were able to hold it off. It was really nice to see that the community was able to protect the town, but it was nearly gone—the fire just kind of went right around my neighborhood.

Is it hard to see fire as a “good” thing when you’ve seen how devastating it can be?

I think fire is a  good thing with  bad consequences at times. Fire can be deemed bad when it’s anthropogenically caused, like a tree falling into a power line and sparking a wildfire that burns down entire towns. But fire is usually a good thing and an essential part of an ecosystem. You need fire for new plant growth of fire-dependent species. Some native species rely on fire, which is why Indigenous land stewards used fire in their management practices. when it's done the right way, when it's practiced when you're implementing it into an ecosystem, that's when it's going to thrive.

Another aspect I’m interested in is the socio-ecological factor of fire. Small communities like Chester are not rich like some communities in the Bay Area. Up here, some people work their entire lives for what they have—they might even live paycheck to paycheck maybe—and one day a fire might sweep through and take everything in less than a minute. There are still people who are living out of trailers after the Dixie Fire, and others who didn't even have a trailer or anywhere to live for months. I hope someday our land management solutions can make a difference for low-income communities.

Forestry, land management, and related professions have historically been male-dominated fields. Do you hope to bring more diversity to the field?

I know it can be a challenge as a woman, but growing up in a logging town and around a lot of men who are in forestry has helped me get past some of the nerves. It's undoubtedly something I'm going to face, but someone needs to do it—women need to go into the profession and create a new culture in the field. And honestly, I don't really care if I don’t earn respect from the men in the field who are reproducing a culture based on gender. I'm doing it for me and for other women identifying individuals who may want to do it in the future.

I took a class with Professor Maggi Kelly last fall, who I credit with steering me toward applications of remote sensing and GIS in forestry. It was really nice seeing a woman leading the fields of applied technology and geospatial analysis: what she's doing at Berkeley and across California has been very inspiring. My advisor, Rob York, and Van Butsic have both been very supportive as I pursue a Master of Forestry. 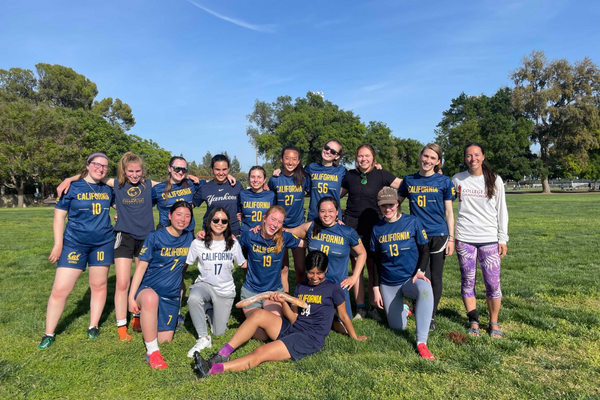 How do you like to spend your free time outside of class and your job as an RA?

I am really into weightlifting and I try to go to the gym every day of the week, and I’m also on the women's Ultimate Frisbee team at Berkeley. Growing up, I always had sports in my life—I played softball and basketball in high school. But when I came to Berkeley there were no basketball and softball club teams and I really wanted to find an outlet that I could dedicate some time to.

I had no clue what Ultimate Frisbee was when I got to Berkeley. I just saw it at a little booth my freshman year and I thought it was just disc golf. When I showed up to the first practice I realized right away it was not what I thought it was, but I ended up sticking with it all four years. We play Ultimate year round: during the fall we’re all on one team, but we split into an A team—the Pie Queens—and a B team—the Tarts—in the spring. Last semester I was a co-captain for the Tarts.

What do you like most about playing Ultimate with the Tarts?

I love the people on the team, which is a big reason why I decided to be co-captain—I wanted to keep up our friendly and inviting culture. We didn't have a B-team after COVID. Everything was online before then, so there was really no point in splitting.

I really wanted to rebuild that when we came back to campus, and I think I was able to do pretty well at that as a captain. Going to practice feels a lot like hanging out with your friends. We also drive to a lot of our tournaments, so we really get to know each other during the long car rides there.