In calculating the social cost of methane, equity matters 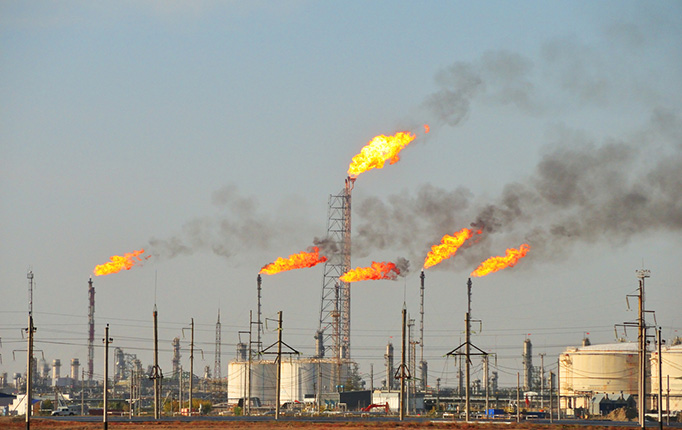 Oil and gas production is one of the top sources of methane emissions. Photo via iStock.

What is the cost of one ton of a greenhouse gas? When a climate-warming gas such as carbon dioxide or methane is emitted into the atmosphere, its impacts may be felt years and even decades into the future – in the form of rising sea levels, changes in agricultural productivity, or more extreme weather events, such as droughts, floods, and heat waves. Those impacts are quantified in a metric called the “social cost of carbon,” considered a vital tool for making sound and efficient climate policies.

Now a new study by a team including researchers from Lawrence Berkeley National Laboratory (Berkeley Lab) and UC Berkeley reports that the social cost of methane – a greenhouse gas that is 30 times as potent as carbon dioxide in its ability to trap heat – varies by as much as an order of magnitude between industrialized and developing regions of the world.

Published recently in the journal Nature,  the study finds that by accounting for economic inequalities between countries and regions, the social cost of methane drops by almost a factor of 10 in sub-Saharan Africa and jumps by almost a factor of 10 for industrialized countries, such as the United States. The study calculated a global mean estimate of the social cost of methane of $922 per metric ton (not accounting for the inequity), decreasing to $130 per metric ton for sub-Saharan Africa and rising to $8,040 per metric ton for the U.S.

“The paper broadly supports the previous U.S. government estimates of the social cost of methane, but if you use the number the way it’s typically used – as a global estimate, as if all countries are equal – then it doesn’t account for the inequities,” said Berkeley Lab scientist William Collins, one of the study’s co-authors.

The lead authors of the study were David Anthoff, a professor in the Energy and Resources Group at Rausser College of Natural Resources, and Frank Errickson, a graduate student in the group at the time of the study. “The Biden administration’s climate policy agenda calls for prioritizing environmental justice and equity. We provide a way for them to directly incorporate concerns for equity in methane emission regulations,” said Errickson, now a postdoctoral fellow at Princeton University. “Our results capture that the same climate impact, when measured in dollars, causes a greater loss in well-being for low-income regions relative to wealthy ones.”

Like the social cost of carbon, the social cost of methane is a metric that is not widely used by the public but is increasingly used by government agencies and corporations in making decisions around policies and capital investments. By properly accounting for future damages that may be caused by greenhouse gas emissions, policymakers can weigh present costs against future avoided harms. In fact, the recent White House executive order on the climate crisis established a working group to provide an accurate accounting of the social costs of carbon, methane, and nitrous oxide within a year.

“President Biden’s action represents a much-needed return of science-based policy in the United States,” said Anthoff. “Devastating weather events and wildfires have become more common, and the costs of climate impacts are mounting.”

“The social costs of methane and carbon dioxide are used directly in cost-benefit analyses all the time,” Collins said. “You have to figure out how to maximize the benefit from a dollar spent on mitigating methane emissions, as opposed to any of the other ways in which one might choose to spend that dollar. You want to make sure that you are not using a gold-plated band-aid.”

Given the current estimate of global methane emissions of 300 million metric tons per year, that puts the annual social cost of methane at nearly $300 billion, said Collins, the head of Berkeley Lab’s Climate and Ecosystem Sciences Division and also a professor in UC Berkeley’s Earth and Planetary Science Department. “Wet areas will get wetter and dry areas dryer, so there’s an increase in severity of storms and droughts,” he said. “The cost would include all the things that flow from that, such as infrastructure damaged, increased expenditures around keeping places cool, health risks associated with heat, and so on.”

While some methane comes from natural sources – mostly wetlands – about 60 percent of methane emissions come from human activity, including agriculture, fossil fuel production, landfills, and livestock production. It is considered a short-lived climate pollutant, staying in the atmosphere for only a decade or so, compared to more than 100 years for carbon dioxide.

“Given its potency as a greenhouse gas, regulating emissions of methane has long been recognized as critical component for designing an economically efficient climate policy,” said Anthoff. “Our study updates the social cost of methane estimates and fills a critical gap in determining social costs.”

Under the Obama administration, the price was estimated at about $1,400 per metric ton. The Berkeley researchers made a technical correction in accounting for offsetting influences on the climate system, arriving at global mean estimate of $922 per metric ton. “We’re suggesting they slightly overestimated it,” Collins said.

But more importantly, the uncertainty around the social cost of methane comes more from the social side, not the physics. “As a climate scientist, we’ve been busy trying to improve our estimates of the warming caused by methane,” Collins said. “But it turns out the physics side is no longer the major source of uncertainty in the social cost of methane. It’s now moved to the socio-economic sector, accounting for the damages and inequities.”

How societies choose to develop in the future – such as expanding cities along coastlines or areas prone to flooding or wildfires, or moving away from such areas – are a big unknown. “If we choose mitigate climate change more aggressively, the social cost of methane drops drastically,” Collins said.

“Continuing our work to further explore the relationship between climate change and socioeconomic uncertainties – not to mention the complex but important issues that arise when we account for equity – is a promising area for future research and policy exploration,” said Anthoff.

Other study co-authors were Klaus Keller, a professor of geosciences at Pennsylvania State University, and Vivek Srikrishnan, a visiting assistant professor in Biological & Environmental Engineering at Cornell University. The research was supported by the National Science Foundation, the Sloan Foundation, and the Penn State Center for Climate Risk Management.

This release was lightly adapted from a Lawrence Berkeley National Laboratory press release. The journal Nature also pubished an accompanying news release on the research titled "The future costs of methane emissions."